Wondering if your partner is “the one?’ If your relationship is truly compatible and once married, it can endure the many challenges it will encounter? In that case perhaps you should read “The Marriage Test,” a book released today in which a couple put forth 40 “dates” to test their compatibility before saying, “I do.”

Documentary filmmaker Brook Silva-Braga (“A Map for Saturday”) and his girlfriend, Jill Andres, dated for five years when they came up with the idea to truly put their relationship to the test via series of 40 dates involving issues like money management, child rearing, sexual compatibility and of course, real estate.

During the writing of the book and the “test,” they lived in Washington, D.C., but prior to they both lived in a variety of NYC neighborhoods as singles: Brook attended NYU and lived in the dorms, followed by moves to the UWS, Williamsburg and Gowanus. Jill lived in Murray Hill, East Village, UWS and Park Slope. After D.C. and writing the “Test,” they moved to a rental in Astoria, which Brook describes as the “perfect nexus of location, price and stuff we like.”

But, of course, living in NYC is never an easy ride.

“More than most cities, you must accept compromises,” said Silva-Braga. “We found a large, affordable two-bedroom in a neighborhood we love, but knew we were sacrificing on the quality of the building, which is famously mismanaged. Yesterday there was no hot water and we were unable to feign surprise.”

In the Marriage Test, house hunting is “Date #36.” Take a look at the video below to see their thought process as they go home shopping: 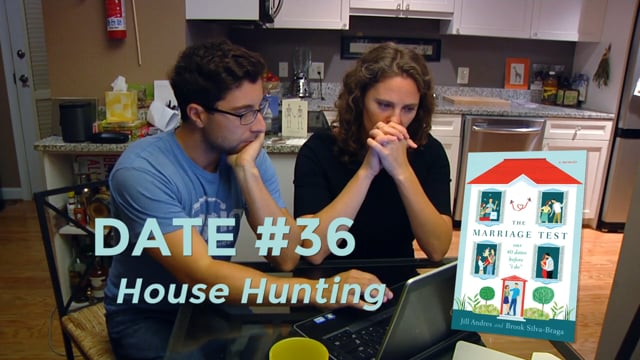 While the couple has still not bought a home yet, the house-hunting exercise helped them get a sense of each other’s tastes. For example, Jill is gung-ho about staying in the city. Brook, on the other hand, likes the city, but is more willing to go to the suburbs, believing that it would be easier to eventually raise a family there.

For now, their Astoria rental will have to do as it gives the couple good subway access, a place big enough to start a small family, a neighborhood feel and it’s a nice compromise between city and suburbs.

Their compatibility tests proved a recipe for success – the couple got married in November 2014. Who got to decide where they honeymooned? Chances are it was a compromise.