Brexit: What Will Be the Impact on Manhattan Real Estate?

With the recent Brexit vote signaling the UK’s departure from the European Union and the subsequent collapse of the British Pound, there is speculation around what impact this could have on the Manhattan residential real estate market. While the Brexit vote was just two weeks ago, examining what has happened to Chinese cash buyers in Manhattan since the devaluation of Yuan over the summer of 2015 may provide some insight on the long term impact of the decision.

In the twelve months before the Brexit vote, UK residents (not including those that used an LLC with a US address) spent $76.8 million in cash on properties in Manhattan, according to StreetEasy’s analysis of recorded sales and mortgage data via ACRIS. While this is the largest amount going back to 2006, it accounted for only 17 percent of all foreign purchases in Manhattan, up slightly from the 15 percent the year before. Despite the Yuan devaluation of July 2015, cash buyers from China have spent $84.3 million on Manhattan real estate over the past 12 months. The total exceeds the amount spent by residents of the UK for the first time on record, and is up 95 percent from the prior year. 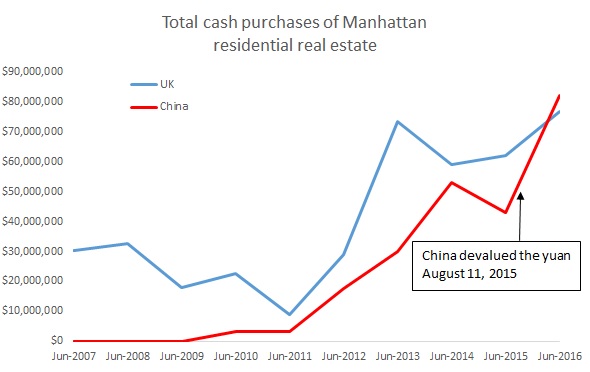 Even before the Brexit vote, UK residents had been spending less and less on properties in Manhattan, but in the aftermath of the vote, they may start to follow the example set by Chinese buyers, who despite their loss of purchasing power, have increasingly sought refuge in the Manhattan real estate market.