New York City’s Chinatown neighborhood, which often gets a bad rap for being over-crowded, dirty and disorganized, takes center stage this weekend as red and gold colors will flow in celebration of the Lunar New Year. Thousands of New Yorkers will pack its narrow streets to watch Chinese dragons and drummers proceed down Canal Street to the blare of distinctly non-traditional Chinese techno music. 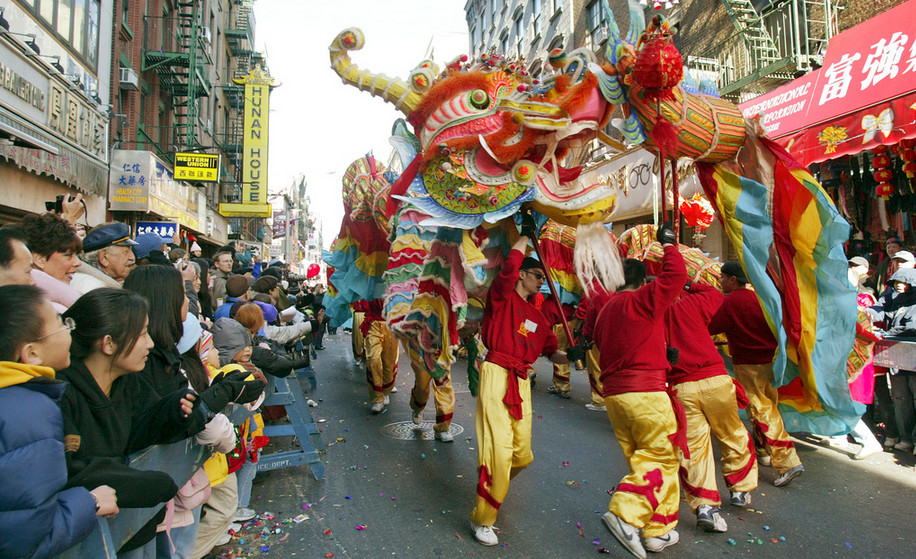 Will Chinatown give over to hipsters?

Despite its reputation for informal industry, dangerously driven mega-bus services and dilapidated housing stock over the past 10 years, Chinatown has been the on-again-off-again darling of real estate media attention as neighboring downtown areas around it have risen dramatically in cool factor and property value. Locals and non-locals alike will now notice the cold brew coffee bars and bespoke cocktail lounges that have taken over traditional tenement buildings on the border areas of SoHo, the Lower East Side and Chinatown. But, the inevitable question remains whether the expansion of Downtown neighborhoods will fully infiltrate Chinatown, bringing in an influx of new residents, hipster-pleasing boutiques and drastically rising property values.

Patrick Lam, a broker with Charles Rutenberg who specializes in Chinatown, says the area is on the cusp with interest growing — especially around Seward Park. “More and more, my clients are people priced out of Williamsburg and the Lower East Side,” said Lam.

The recent arrival of Pies ‘n’ Thighs, the revered Williamsburg fried chicken joint, to Canal Street just west of Seward Park, would corroborate Lam’s claim to Chinatown’s budding renaissance as would other several other major infrastructural changes in recent years.

With the completion of bike lanes along Grand and Allen Streets, hipsters on their fixies can now better scoot around Chinatown’s incomparably congested streets. A refurbished park under the FDR at Rutgers Slip now offers an outdoor rec center with basketball courts and steel gym equipment where Chinese women do tai chi in the morning sunlight and skinny jean clad skateboarders perform tricks. 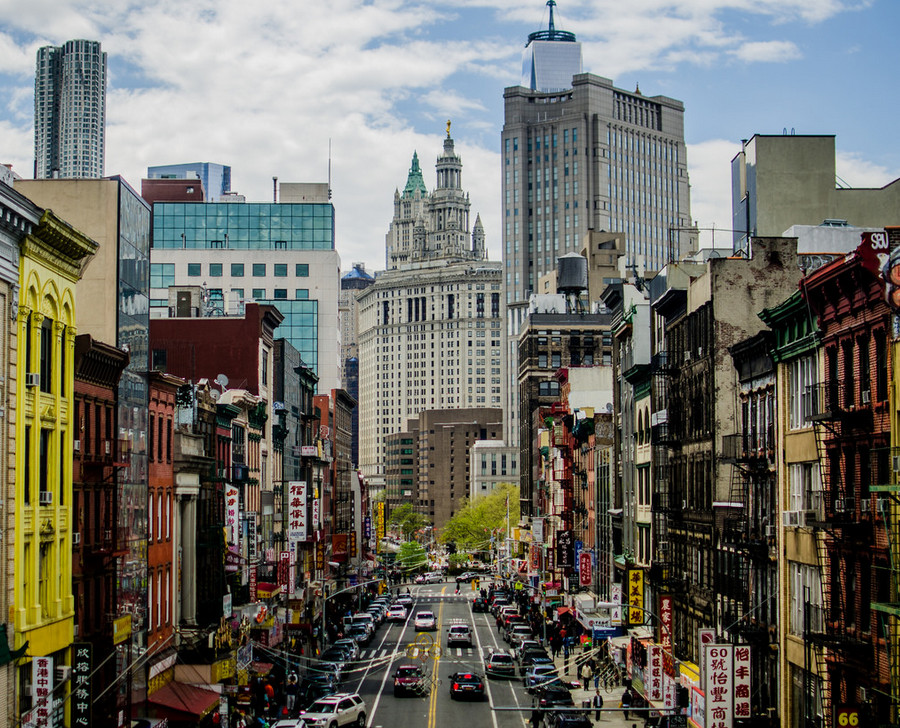 Chinatown real estate under the radar

But in spite of recent evidence of change, sales and rental prices in the area move at a cool pace. The past year, Chinatown’s median sales price saw a 2.6 percent increase and median asking rent decreased by almost 4 percent. These trends depart from the rest of Downtown Manhattan which saw a 17 percent increase in median sale price and no change in median asking rent.

Downtown Manhattan has a lot of small neighborhoods, measured by sales and inventory volume, but Chinatown is among the smallest with just 33 homes on the market for sale in 2014 (currently, there are seven for sale). Although lack of inventory is nothing unique to Chinatown, it is an extreme example of the city’s shortage suggesting inherent differences in how real estate works in Chinatown compared to the rest of the city.

“Culturally, Chinatown has a big presence in the city, but in inventory it’s only a very small part,” says Chris Morales, a Douglas Elliman broker and resident of the neighborhood. “And what’s available may be impenetrable to non-locals.”

This is especially acute in the historic core of the neighborhood on the blocks radiating from Columbus Park such as Elizabeth, Mott, Bayard and Baxter. Tucked into these narrow streets, there are many old rent-controlled tenement buildings – slightly dilapidated on the outside and subdivided on the inside with multiple tenants sharing a single one-bedroom.

This older housing stock is rent-controlled and filled by Chinese families who moved in the 1930s and who now hand down the property generation to generation. Word of mouth continues to drive the transactions in these buildings where tenants may pay as little as $60 a month, notes Lam.

Take the story of Wen Chen, a tech worker in the Flatiron who recently moved to a fifth-floor walk-up on East Broadway. Although the apartment was not advertised publicly she says it was not hard for her to find.

“I’m Chinese and am connected to the community,” said Chen.

Instead of working with a broker and paying a fee, she was able to negotiate directly with the property manager and landlord. 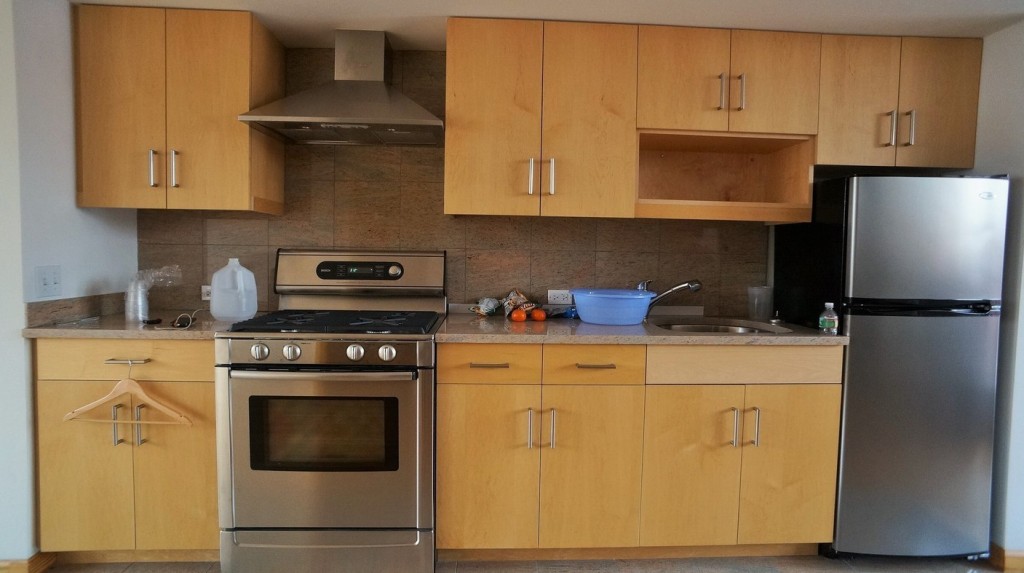 Aside from word of mouth, Lam says, there are a small number of local brokerages that control up to 75 percent of the inventory and that transact almost exclusively among the Chinese community. Outside of the central Chinatown corridor, there are also brokerages like MW Realty and Proplink whose listings occasionally appear on StreetEasy. According to Chen, these listings cater to a different audience and tend to cluster around Seward Park where there is an increasing amount of new and more expensive real estate.

Apartments in Chinatown are limited and hard to find across the board since so few are publicly advertised or advertised online, but renters from outside the community may have better luck in the Two Bridges section of the neighborhood and around Seward Park. Lam is currently listing two properties at 136 East Broadway just off of Seward Park, a two-bedroom listed at $3,700 and a one-bedroom listed at $2,700. According to the listing descriptions, the units are located in a “brand new elevator condominium building located on the Lower East Side.” Lam says much of the interest in these properties comes from people relocating to New York from as far as Texas, the UK and France.

Many of Chinatown’s rental and for-sale transactions take place in non-traditional ways. Low rent and low fee apartments pass between friends and family connections. For example, Chen locked in her no-fee apartment because the property manager was a friend of the family. Some say inroads can be gained by befriending a local broker or knowing how to speak Chinese.

Morales spoke affectionately of Cindy Hu, a broker at Chez Moi Realty, whom he refers to as “a very nice broker” and whom he refers friends interested in finding a low rent apartment in the area. He always receives invitations to the New Year’s party she throws in her apartment off Seward Park. For others not in the know, however, Chinatown’s lower rents may be unattainable since these listings may only be publicized in the Chinese newspaper or through friends and family.

The idea of Chinatown may intrigue people especially with the rise of Seward Park and nightlife along East Broadway and Forsyth,” Morales contends, “but as for the old part of Chinatown, it will always be dominated by locals.”

Mix of yuppies from FiDi and older generation Chinese

Kathleen M, a former renter in Chinatown, said, “It’s such a tight-knit community and things are very much done within that community. Word of mouth is really how a transaction begins — much more so than online.”

After befriending a broker – Kathleen knows a few words of Mandarin which she alleges gave her an in – she decided to sign a lease at an apartment on a small side street east of Bowery. Although her building was evenly split between new residents (“yuppies from FiDi,” she said) and older generation Chinese, the landlord was not Chinese and actively marketed the building newcomers.

“We were definitely paying more than the older (generation) people,” Kathleen said.

Her unit had been refurbished and was being rented at market rate, but other units in the building as well its common areas were deteriorating and had not been updated in years.

“You’d be stepping over garbage and around holes in the floor to get to your $3,000 a month apartment. But once I was inside my apartment, it was idyllic!” laughs Kathleen. “It’s a great neighborhood for single people willing to make concessions,” Kathleen continues.

Morales moved to the neighborhood in 2011 after graduating from Columbia. He was looking for a good deal and a place with some local character and found a two-bedroom in an old tenement building on Mulberry Street for about $2,000/month. It fit the bill and he acted fast, paying a one-month’s broker fee, which was far less than the typical 15 percent fee in Manhattan. Morales now frequently recommends Chinatown to friends moving to the city looking for lower rents and a central location. With a median asking rent of $2,500/month last year, rents in Chinatown were the lowest among neighboring Downtown areas and 19 percent lower than Manhattan’s median asking rent.

Morales feels Chinatown’s lower rents fuel a sense of transience. “Newcomers don’t plan to buy here or necessarily stay for long,” he said, theorizing that landlords are less motivated to make substantial upgrades to their properties, which ultimately keeps their rents low and some of the ‘yuppies from FiDi’ out. 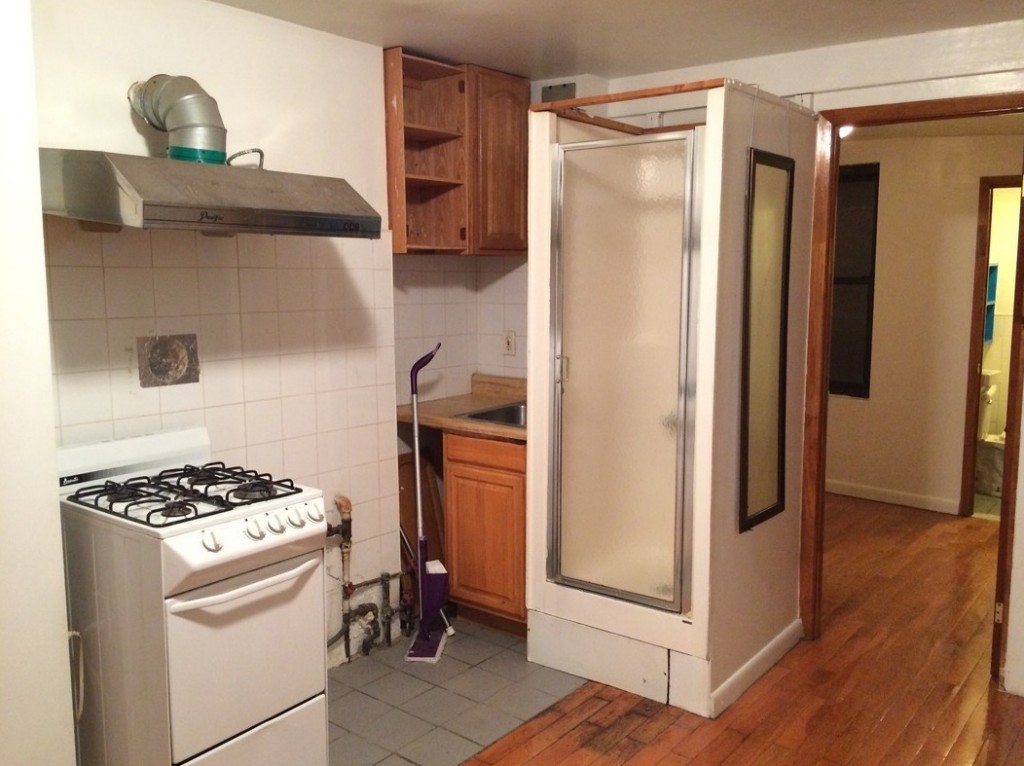 One of Chinatown’s many quirks. A rental listing on Orchard Street with the shower in the kitchen.

Matt Suen, an architect who lives on Madison Street, also cites the importance of working from within the community. He got connected to a local broker through a friend who grew up in Chinatown and is fluent in Chinese. Matt ended up landing a place for $2,000/month and just a month’s rent in fee. He describes it as one of those moderately upgraded rental buildings where tenants “vary between hip, young white kids, students studying at Pace and old Asian families.” His apartment is small and recently renovated and in his words “newish” looking. “The work is kind of cheap and things don’t join or line up super tightly, but it’s an effort and it looks OK,” Suen said.

While the mixed residential make-up of Suen’s building and the minor renovations to some units may signal a shift in demographics, Suen doesn’t “… see a Dean & DeLuca or Equinox opening any time soon.” But he does acknowledge the encroachment of the LES and the rise of “newer and better Chinatowns in Brooklyn and Flushing.”

Chen also cites the rise of places like Sunset Park where she sees “a replica of what Chinatown used to be.” Initially attracted to Chinatown because of its low comparable rents and centrality as well as its prevalence of Chinese ethnic markets, Chen has found the streets less bustling with the traditional Chinese vendors than they were in the days when she and her family used to come in from New Jersey to shop.

“I used to have to fight my way down Canal Street, but now most days I can speed walk my through,” said Chen. “And I’m wondering where did all these people go?”

“Maybe in a decade Chinatown will be as Chinese as Little Italy is Italian – just some token street with a trinket vendor and a dumpling shop to remind people that there was something very once,” says Suen.