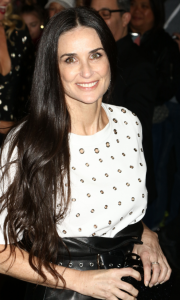 UPDATE (4/21/2017): Almost two years to the day, Demi Moore has finally bid adieu to her trophy apartment at the prestigious San Remo building.

Moore’s price tag started at $75 million in April 2015 and after finding no takers, she cut it to $59 million a year later before finally settling on a sold price of $45 million April 19, 2017. And now we hear she might write a tell-all book on her marriage with Ashton Kutcher, which could lead to another huge payday.

ORIGINAL POST (4/20/2015): Spring is in the air and the Central Park trees are starting to bloom. The more seasonally enticing views may have prompted Demi Moore to finally move her one-of-a-kind “floating mansion” in the iconic San Remo building from “pocket listing” status to a full-fledged media blitz.

The triplex penthouse’s availability made a big splash when Moore called on veteran real estate writer Robin Finn of The New York Times to give some well-crafted ink about the 14-room residence in the primely situated South Tower at 145 Central Park West.

The list price is $75 million, which includes unit PH26C (the penthouse) and unit 1H, a 2-bedroom, 2-bathroom ground-floor maisonette. It’s a big number that Moore has been seeking through a private sale for at least a year before turning the listing over this week to the Modlin Group.

Moore’s position about the San Remo apartments she and her ex-husband Bruce Willis purchased in 1990 from “Saturday Night Fever” director Robert Stigwood has not changed. With her primary residences in Idaho and Los Angeles, Moore hasn’t lived in the South Tower unit for several years and wants someone to take it over and appreciate the spread for all its glory. The Times reports that Moore did not complete a plan to refurbish the master suite, but renovations were done to the kitchen and a massive, two-story media room.

What has changed since Moore first started trying to find an off-market buyer is the New York real estate market. It continues to see the ceiling busted over and over on all manner of high-end properties, making the $75 million asking price a lot less astronomical-sounding.

While investors and billionaires looking for Big Apple abodes have fueled new construction and redevelopment mania all over the city, Moore and her representatives are now trading on the fact that the San Remo is nothing short of a masterwork fortress built in 1930 and designed by Emery Roth as the first twin-peaked building in New York.

Modlin told the Times that recent co-op sales at 960 Fifth Avenue, the sale by Jets’ owner Woody Johnson of his co-op at 834 Fifth Avenue to Ukrainian billionaire Leonard Blavatnik for $77.5 million and another monster sale for $71,277,500 at 740 Park Avenue justified the list price Moore sought.

“Compared with the other iconic private perches on the perimeter of Central Park, there just isn’t anything quite like this penthouse. It is the grandest residence in the South Tower, the one that sits above all the others, a mansion in the clouds, and it is the largest intact park-facing residence at the San Remo with private outdoor space,’’ Modlin said.

But the listing description boldly attempts to shred any doubt that this residence is “the last unicorn” in New York City real estate. For instance, Moore’s penthouse is:

While Moore has long been willing to part with her San Remo gem, other celebrities have made it their home. U2 frontman Bono owns a penthouse unit in the North Tower. The co-op has also been host to the likes of Dustin Hoffman, Diane Keaton and Steven Spielberg.

While it has been 25 years since Moore and Willis snapped up the pair of apartments, and it’s been years since she has used it as her NYC home, Moore’s infatuation with the place remains strong.

“We looked at everything on the park, Fifth Avenue, Central Park South and Central Park West, and there was just nothing like it,” Moore told the NY Times. “The location, architecture and history of the San Remo were on a completely different level.”

Stayed tuned to see whether that completely different level results in a new ceiling for a San Remo “mansion in the clouds.”