Although the seminal American architect may not have been the biggest fan of our beloved city (he once referred to it as “a great monument to the power of money and greed“… go figure) and favored the horizontal, open and limitless plans of the Midwest and Southwest, there are several notable Frank Lloyd Wright sites in New York City and the tri-state area. Here we round up our top picks. Some you’ll recognize, some will surprise you and some you can even buy! If we’ve missed any of your faves, please let us know in the comments section below. 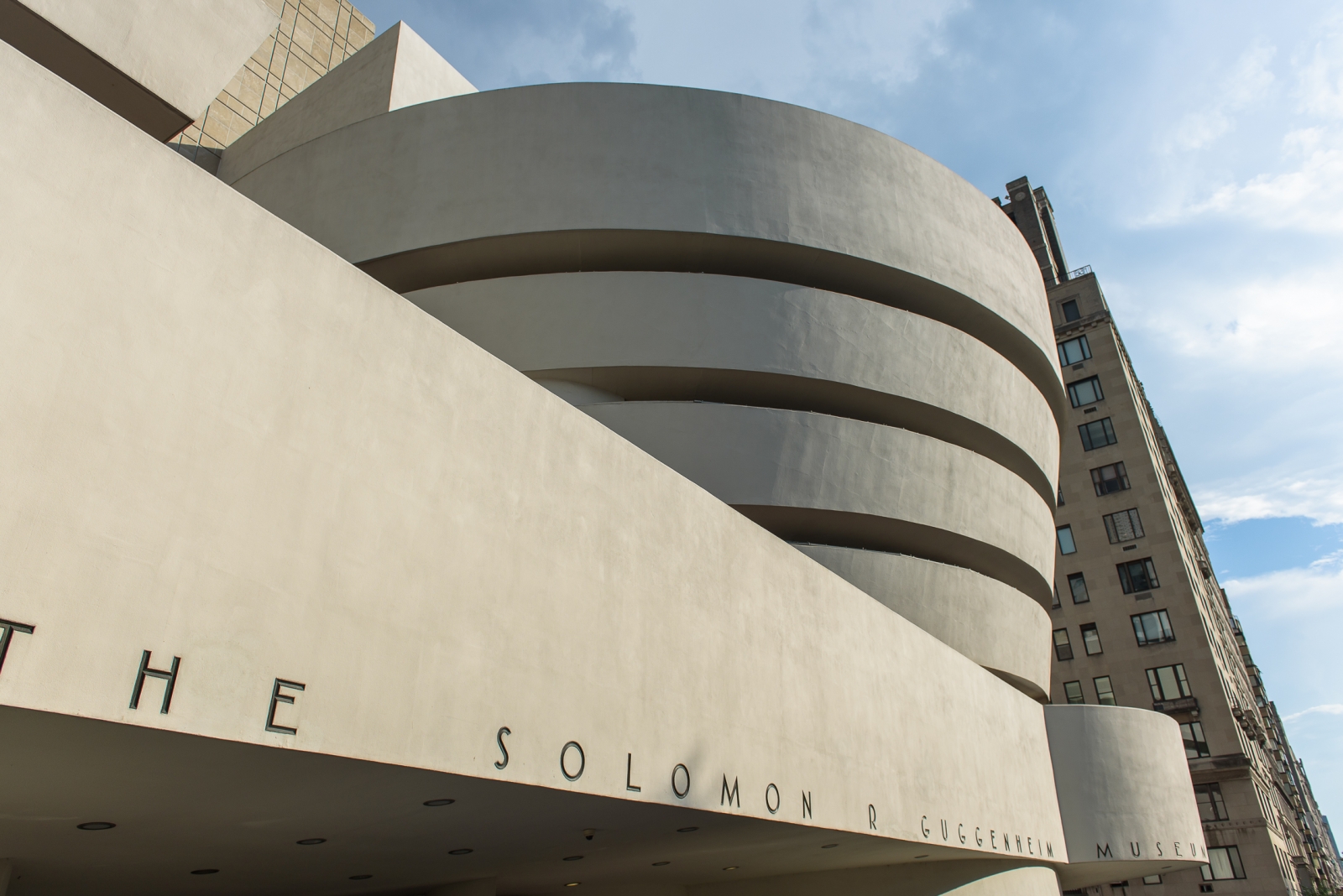 Where better to start than the most obvious? The Guggenheim is easily Frank Lloyd Wright’s most recognizable work and one of the most iconic buildings in NYC. Visitors come to the museum just as much to take in its facade and experience the upward and downward spiral of its exhibition halls as they do to view the actual art on display. At the time of construction, the design was a complete departure from the conventional style of cultural institutions. Its spiral shell shape is a rejection of the modernist architecture’s reverence for rigid geometry and embraces organic shapes inspired by nature. Is the proximity to Manhattan’s biggest swath of nature a coincidence? Probably not.

If you haven’t been, it’s your duty as a New Yorker to go!  Even if you have been, go again! The price of entry to the museum is expensive, but you can stand in the lobby without paying a thing and look upward at the spiral. Located on 5th Avenue between 88th and 89th, across from Central Park. 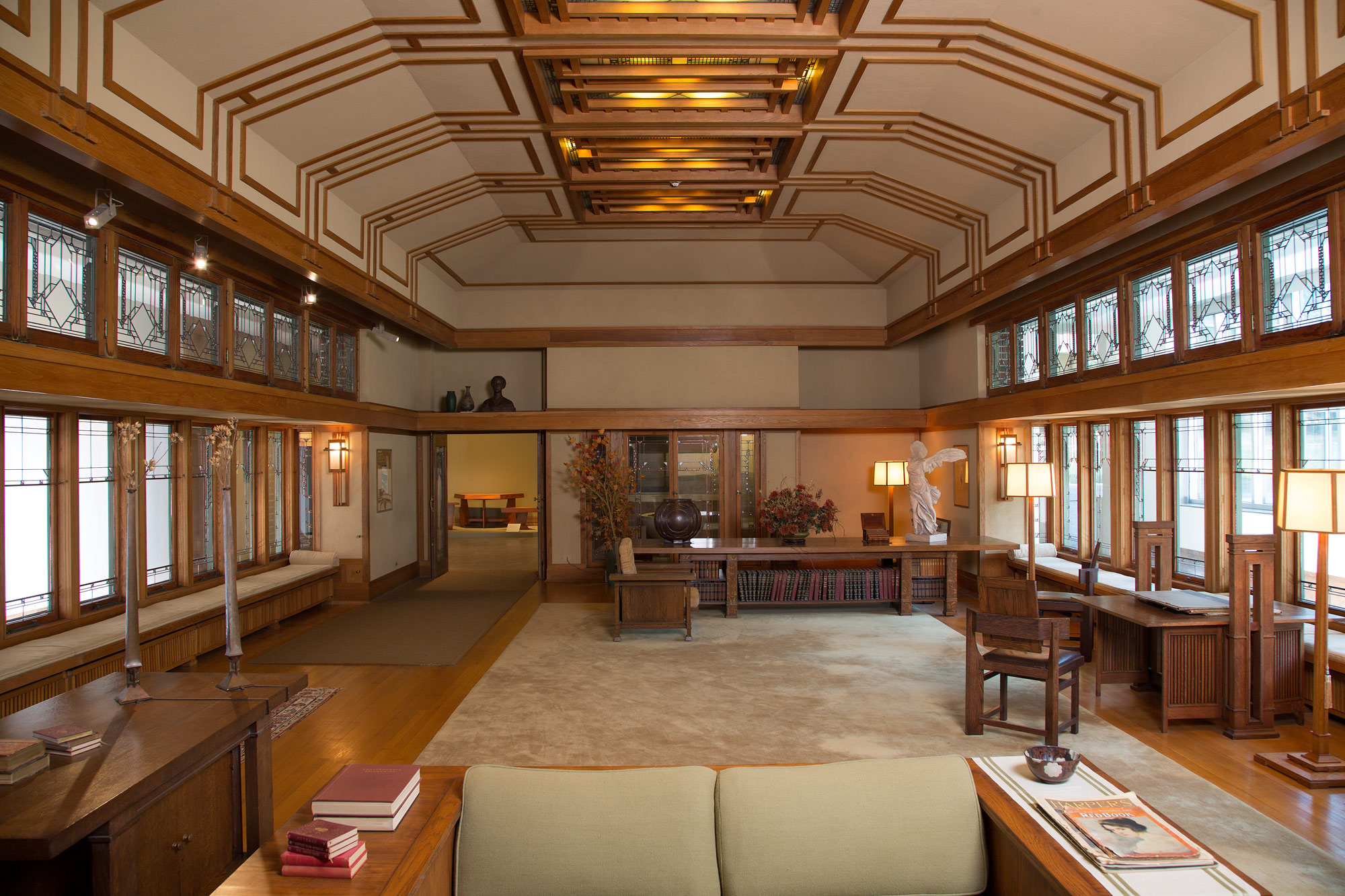 The only opportunity to experience a Frank Lloyd Wright interior in New York City, the Francis and Mary Little House Living Room reconstruction at the Met exemplifies the architect’s Prairie aesthetic, a style inspired by the low, flat and wide landscape of the Midwest. The room also is a testament to Wright’s concept of organic architecture, in which there is a natural symbiosis between a building’s structure, its interior design and its setting within the environment.

Unlike typical living room layouts of its time, the Little House Living room features a set of horizontal spaces encased in glass, a nod to Wright’s concept of spatial continuity and the foundations of the open floor plan layout that has popularized contemporary apartment design throughout New York City. The floor-to-ceiling glass windows create a direct connection with the views and landscape outside. Originally those views were of Lake Minnetonka in Minnesota but now the Met’s recreation maintains that original connection with nature by offering views directly out onto Central Park. 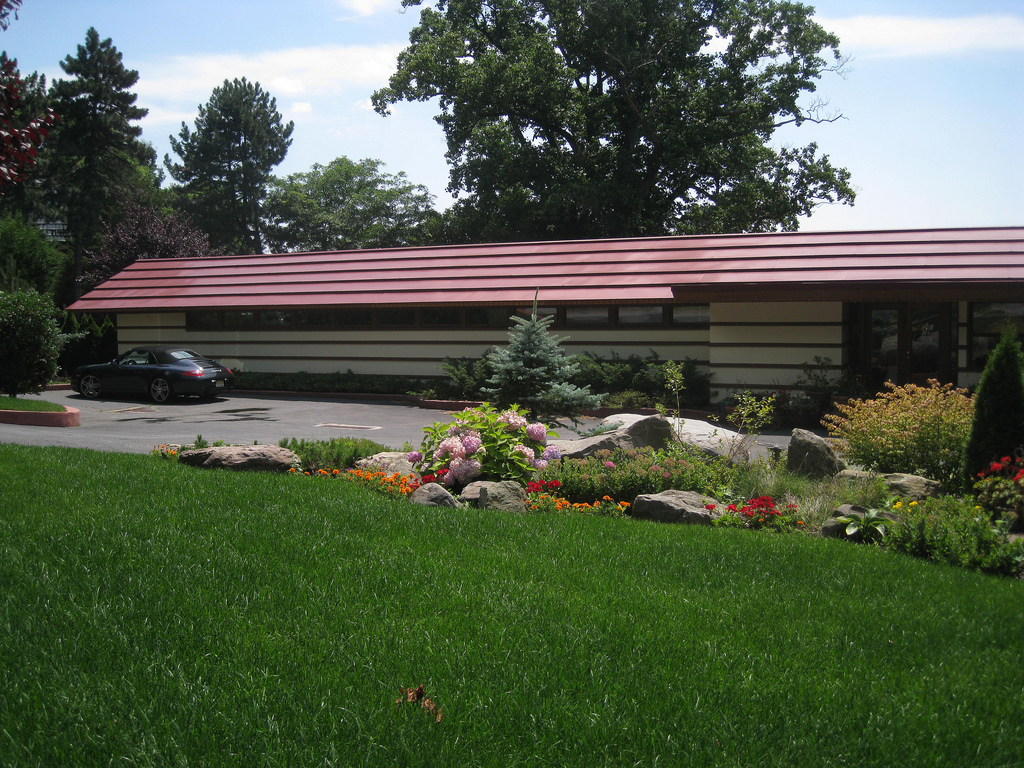 Built for Catherine and William Cass, the Crimson Beech house is the only private residence designed by Frank Lloyd Wright in New York City. The home is one of 11 pre-fabricated models Wright built with Marshall Erdman, a testament to both the architect and the contractor’s dedication to providing middle-class Americans with affordable, easy-to-construct homes. In 1990, the home received designation from the Landmarks Preservation Commission as a historic site and was noted as “Wright’s last major attempt to address the problem of well-designed, moderate cost houses.”

Today, the house remains a private residence and is not accessible to the public. 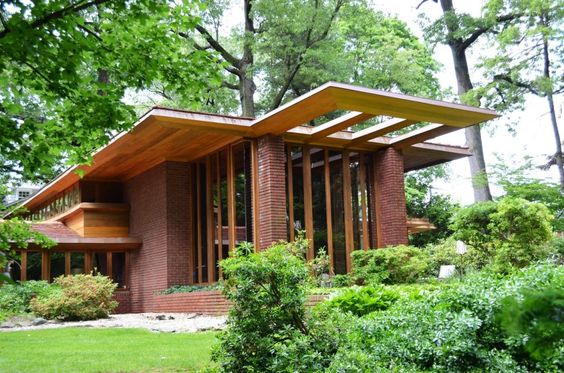 This 7-bedroom suburban home in Great Neck on Long Island was originally built for Ben Rebhuhn, a magazine publisher,  and is an example of Frank Lloyd Wright’s Usonian style. As is the case with this single-story, unassuming residence, the Usonian style was typified by small dwellings without much ostentation. Usually they did not offer garages or much by way of storage. In keeping with the Usonian style, the Rebhuhn House creates a distinct connection between the exterior environment and interior of the home through ample use of natural lighting, solar heating and large, flat cantilevered roofs and overhangs. 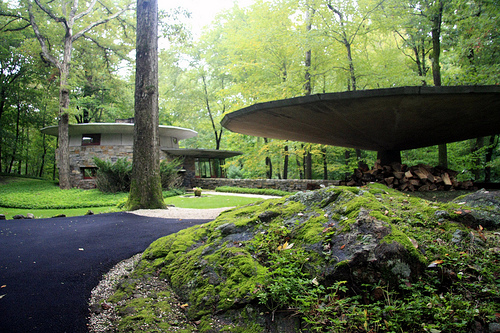 The Sol Friedman House is one of the three Frank Lloyd Wright designed homes in the Usonia Historic District. Source: World Architecture Map

The Usonia Historic District in Westchester County was a planned community designed according to Frank Lloyd Wright’s Broadacre City concept. One of Wright’s seminal urban planning tenets, the Broadacre City theory rejected the favored urban planning model of a centralized city and instead envisioned a new model for suburban living in which automobile transportation was prioritized, apartment-style housing was minimized and families were decentralized across separate one-acre tracts of land.

In 1945, a co-operative of young people hired Wright to build a community according to this plan for them. In turn, Wright designed the layout of the community in a circular plan and decided where to place each of the homes. Across the 100 acres of suburban woodland, he placed 50 Usonian-style houses. Owners within the cooperative shared common land and facilities. The community features three homes Wright designed himself, which were later added to the National Register of Historic Places.

The three Frank Lloyd Wright-designed homes in the community are:

Of the three homes, the Sol Friedman House is the most notable with its organic circular motifs that seem inspired by tree mushrooms. The living space is defined by two intersecting circles of different heights. The home also includes a mushroom-shaped carport. 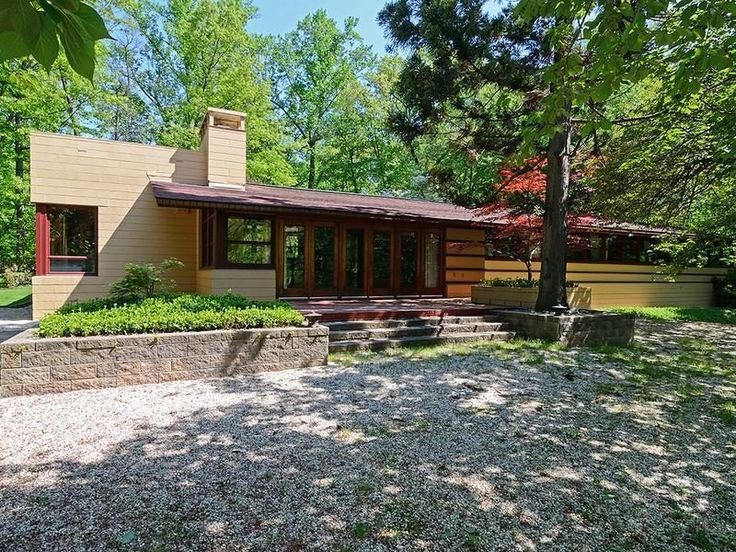 The Socrates Zaferiou House is another example of the pre-fab models of homes Frank Lloyd Wright built with the developer Marshall Edman. In keeping with Wright’s signature pre-fab design, the home is just a single story and features an open floor plan layout. Long slung and with long panels of horizontal windows, the interior and exterior of the structure unassumingly integrate with the natural landscape surrounding it. with The home sits on a 2.5 acre plot of land and overlooks Blauvelt State Park. 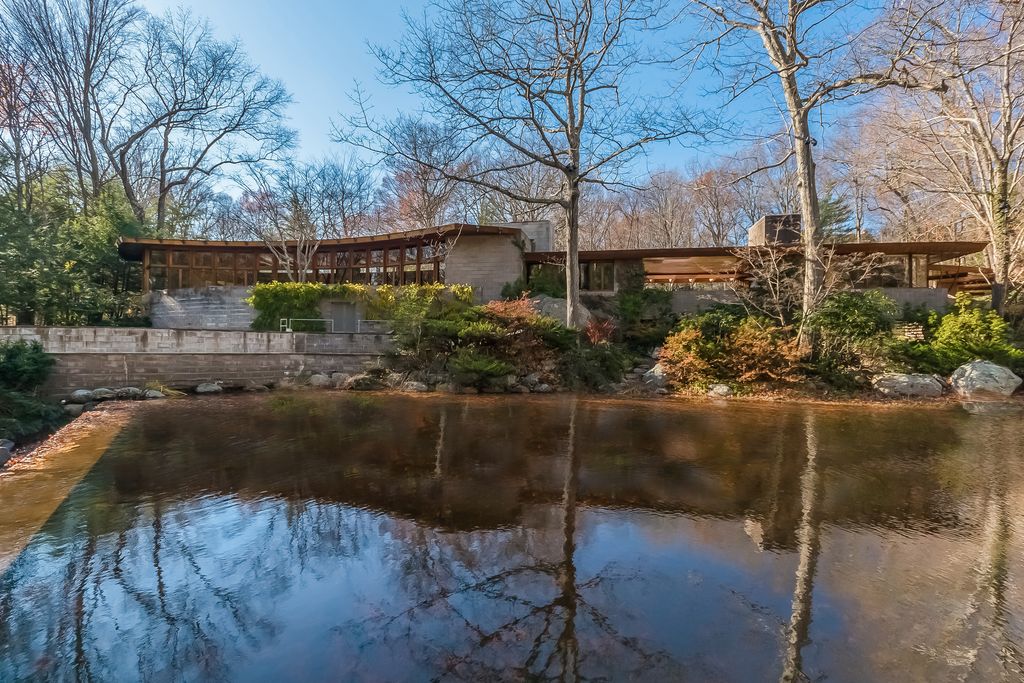 Sited on a pond off the Noroton River, the Rayward-Shepherd House was designed by Frank Lloyd Wright in 1955 for Joyce and John Rayward. The house, however, was not completed until after the architect’s death. After Wright’s death, Herman Shepherd took over designs and completed the house in 1964.

Also referred to as Tirranna, which is Aborigine for “running water,” the house is a feat of landscaping. As the name might suggest, this residence recalls Wright’s residential masterpiece, Fallingwater, organically integrating the surrounding natural topography and water with its structural design. Much of the interior living space overlooks a pool, which then gives way to a pond and garden, designed by the renowned landscape architect Frank Okamura, best known for his work at the Brooklyn Botanic Garden.

The home is currently on the market, listed for $7.2M. 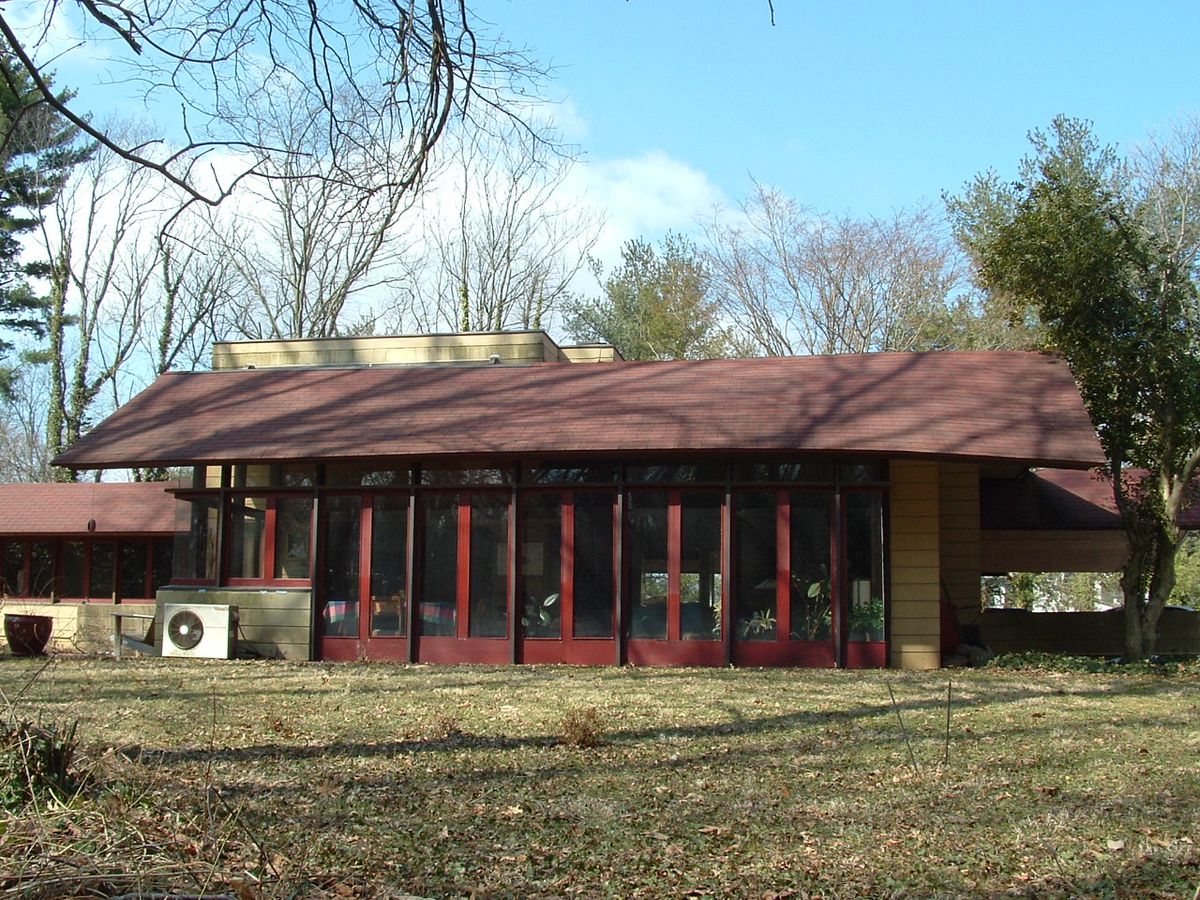 The J.A. Sweeton House is the smallest of Frank Lloyd Wright’s residential designs and is located in New Jersey. (Source: Curbed)

The J.A. Sweeton House is another example of Frank Lloyd Wright’s Usonian-style homes. This one, however, is among his smallest designs, offering three bedrooms and one bathroom. Despite the small footprint, the home has a more expansive feel thanks to its use of an open floor, glass doors and corner and cathedral-pitched ceiling. The home also features a cantilevered carport, another classic feature in Frank Lloyd Wright’s residential repertoire. 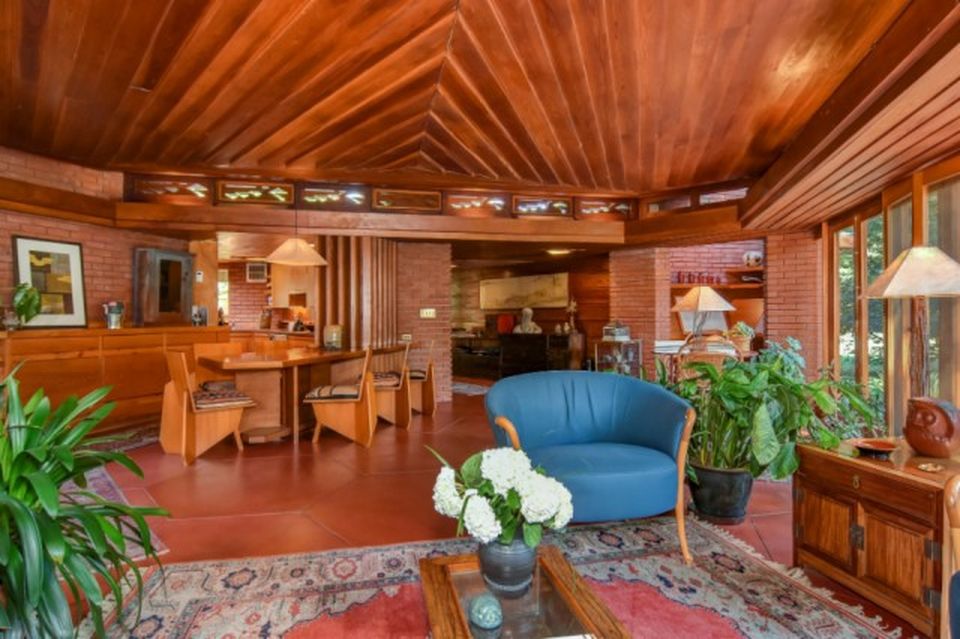 The Richardson House in Cherry Hill, NJ was recently sold for $999K.

The Stuart Richardson House in Glen Ridge is a later example of the Usonian design, again featuring a large open floor plan style living room framed by floor-to-ceiling windows. The design, however, departs from the typical blueprint for Wright’s Usonian designs as it based on a hexagonal floor plan. The three-bedroom features many characteristic Frank Lloyd Wright details like triangular skylights, chevron-patterned wood paneling and Cherokee red tiling. The property was sold in 2016 for $999K. 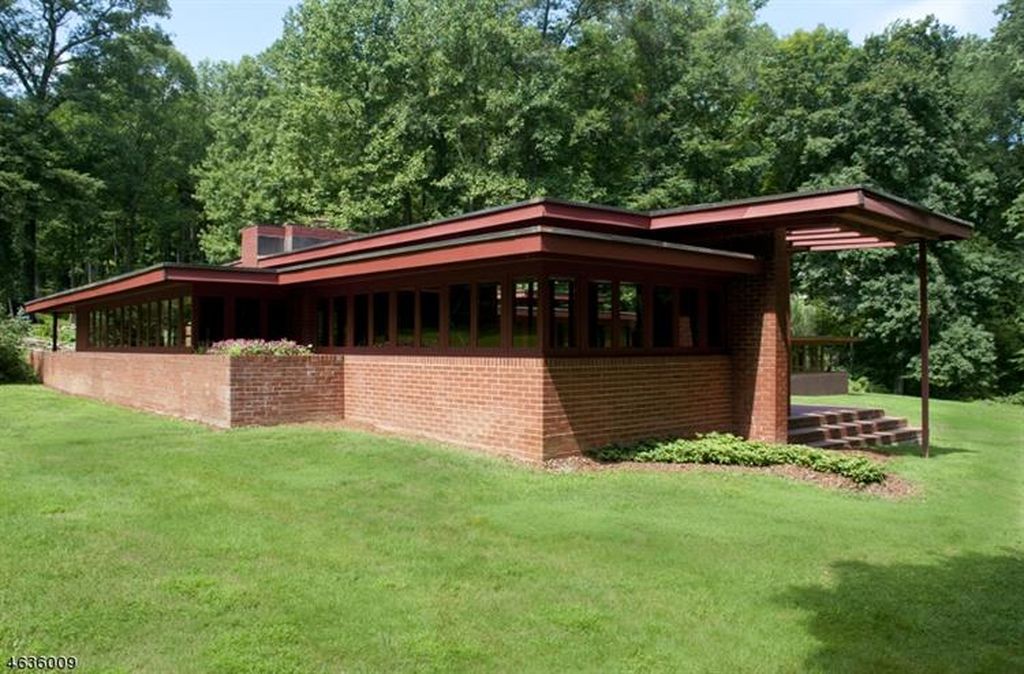 This 2,000-square foot home again employs Frank Lloyd Wright’s signature Usonian design, but at a much larger scale than his other residences in New Jersey. The one-story home he built for James Christie in 1940 is, in fact, FLW’s largest residence in the state. Although at a larger scale than other Usonian homes, it still adheres to style’s classic characteristics and is conscious of the seven acres of natural environment and secluded woodland surrounding the home. The interior of the home is wood-paneled and features an open-floor plan living space divided a brick fireplace (a design element also found at his famed Robie House in Chicago) and horizontal running series of narrow windows. The home was last sold in 2015 for $1.7M.