I have never left the old neighborhood, not really. I still have friends in their childhood homes, one of them a few doors from the Trump house in tony Jamaica Estates adjacent to Jamaica itself, the ancient hub of Queens.

I still park on quiet streets with English names, Avon-Somerset-Henley, to take the F subway into “the city” (Manhattan, that is.) I drive through the old neighborhoods, with all the changes, feeling love and gratitude for a great childhood in the post-war boom in a nearly pastoral corner now called Holliswood. (A girl in kindergarten had a pony, back in 1945. We’re still in touch – the girl, not the pony.) 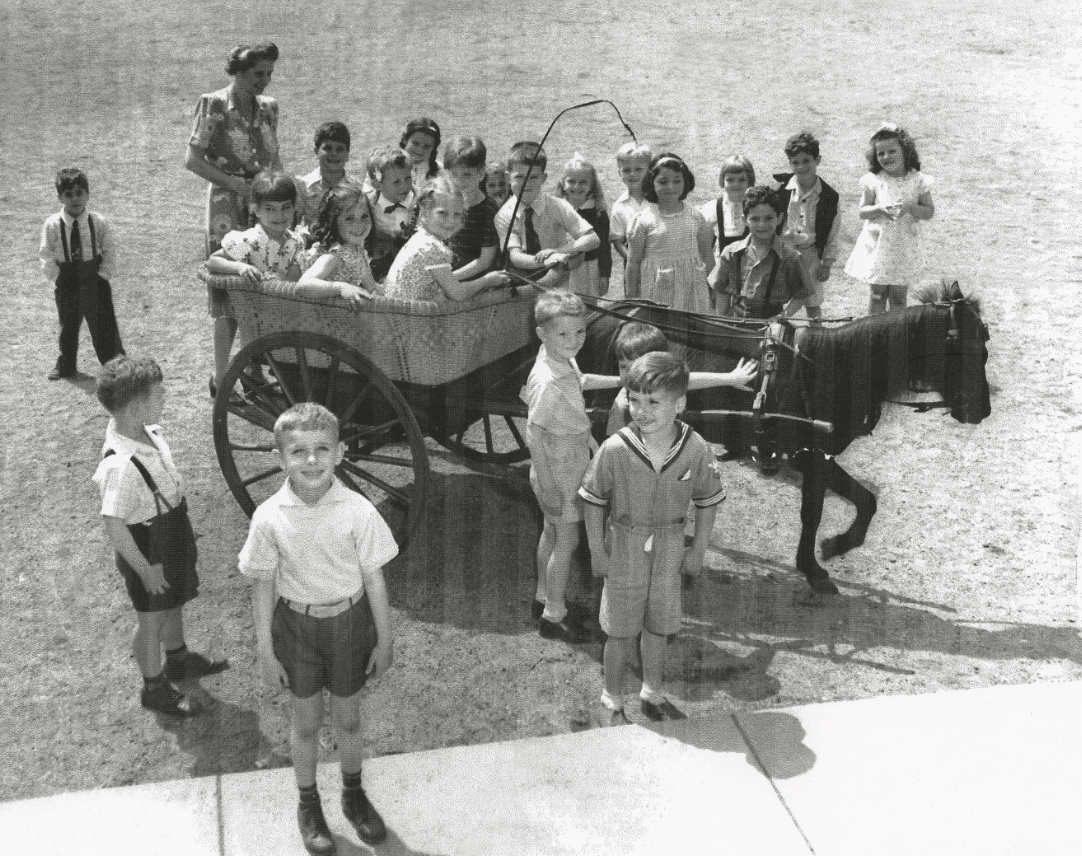 My kindergarten class with Mrs. Pinchen. I’m in the tie and white shirt, standing behind the cart.

I see signs of urbanization — low-market shops, gratings on windows, storefront churches, West Indian markets, a madrassa only a block from my beloved Jamaica High School, recently terminated by the Bloomberg administration. The area bustles with life and hope and, yes, hard times and edginess. It is home.

Now I read on StreetEasy that the confluence of Jamaica and Jamaica Estates is going to be the new hot New York neighborhood of 2016.

I don’t quite know how to process that.

My wife told me in 2003 that we should not sell my family house, after my mom had passed, but as we all know, I never listen to my wife. We sold it, after it had sheltered four generations of Spencers and Vecseys for something like 77 years. I’m not cut out to be a landlord – the call in the middle of the night that a pipe has burst. (We did settle on an alternative: we  “bought” my family’s house in the Panorama at the bustling Queens Museum. See, that little speck down there?)

Now I read that relatively attractive rents and home prices may entice a new wave.

Well, I was in Bushwick, Brooklyn, on a Saturday morning just before Labor Day in 2014. I saw young people, their suitcases clumping down the stairs of the elevated train, in search of kale and better rents. I was in a peluqueria talking to the owner, who had 10 chairs going, for the Saturday night dressup. The Latina ladies eyed the kids with the suitcases emerging from the el. In my mind, every one of those young people represented a hike for current renters in Bushwick. Ka-ching.

I had lunch uptown with a pal last week, in a lovely place (Chocolat, plug-plug) with high ceilings and good food, on a restaurant row that has emerged on Frederick Douglass Blvd. Who got moved out? Who couldn’t afford to stay in that upcoming corner of Harlem anymore? Is that where Jamaica is going?

And what about the higher-economic neighborhood of Jamaica Estates? When I visit, I feel nostalgic for Mrs. Rhodes, the teacher who rescued me in high school, and the Stein house, where we played basketball on Friday afternoons. A sizeable portion of the Tudor homes has already been turned into stone-and-glass fortresses, Iranian palaces, as they are known. Even more money is going to pour into this favored corner?

Central Jamaica – from the Grand Central Parkway southward to Linden Blvd. – produced classmates of mine who became teachers and cops and business people, athletes and artists, people with dreams and talent. Mario Cuomo’s family ran a store in South Jamaica; before he became governor and moved into Holliswood. (The Cuomos, lovely people, voted in the same place as my parents.)

South Jamaica can also be tough. A couple of decades ago, I went around with a couple of officers from the One-Oh-Three Precinct, on a Friday night, and saw just about everything, including, near midnight, a stabbing in a 50-cent card game. The man died in Mary Immaculate Hospital, where I was born. In 2014 on Jamaica Avenue, a police officer was struck by a hatchet wielded by a man in an apparent bias crime. The officer has only recently returned to desk duty.

Jamaica also has solid apartment buildings and multi-family houses and the E and F trains into “the city” – a beacon to young people now shut out of Williamsburg and Long Island City. But who moves in? And who moves out?

I have a proposal. If Jamaica and Jamaica Estates are the next hot property in this ever-fermenting great city, then make the area more attractive. One of the great beacons of Jamaica was the grand high school on the hill, opened in 1927. I take this personally. My mother, May Spencer, was in the first entering class. The school nurtured her and later it nurtured me. (In the past two decades, I used to visit classes at Jamaica; I can attest to you, education was most surely taking place.) 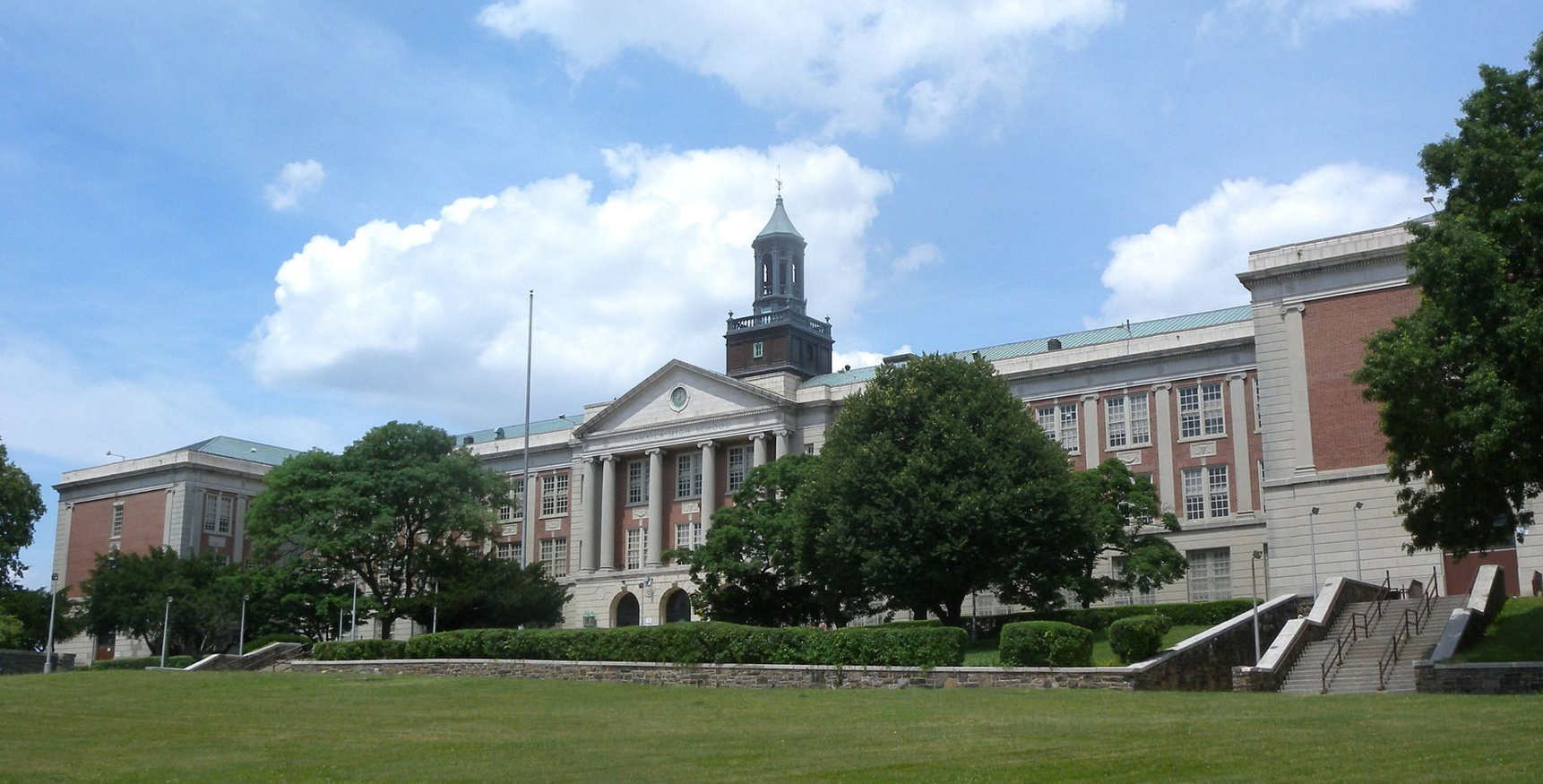 Jamaica was a beacon. Ask Jelani Cobb, the writer and commentator whose mom fudged their home address so the Cobb kids could study under a teacher named Herb Sollinger. Cobb wrote a lovely piece in the New Yorker, deploring the recent shutdown of the great entity known as Jamaica High School. When urban reality came to Jamaica High, some violence plus alleged failing grades gave the smart-money people in the Bloomberg regime an easy solution – shut the thing down, kill the tradition. (To be fair, four or five smaller experimental schools are in various corners of the building.)

The joke is that the building itself was made to last for centuries. If young people of some money and privilege and hope are going to flock to Jamaica and Jamaica Estates for better rents, better housing, thereby squeezing some of the poorer people in the area, the least the city can do is provide a high school worthy of aspirations of all people. Reinstate Jamaica High School. Turn on the beacon.

Everything dies baby that’s a fact
But maybe everything that dies someday comes back
—Atlantic City, Bruce Springsteen

(George Vecsey is a former sports columnist for The New York Times and author of many books. His opinions are his own, findable on his personal web site, georgevecsey.com. He lives in Port Washington, Long Island, as far from Queens as he can stand.)