Long gone are the days when the idea of relocating from Manhattan to Brooklyn was met with skepticism. Unfortunately so too are the days when you could bank on finding more space for less there. Point and case: Dumbo – Brooklyn’s most expensive neighborhood where prices rival those of Downtown Manhattan’s most coveted neighborhoods. This spring, asking prices in Dumbo have actually exceeded $2M, surpassing Downtown Manhattan’s $1.8M median asking price. 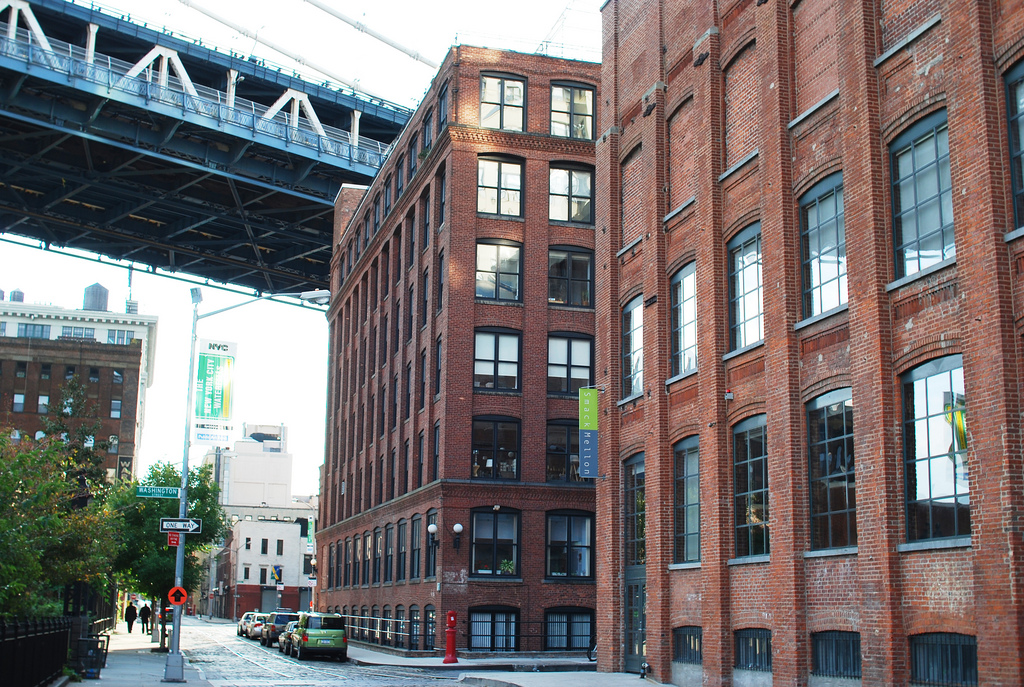 With its cobblestone streets, converted lofts, upscale boutiques and spate of new developments, Dumbo in many ways is a whole lot like that other uber-expensive, trendy neighborhood across the river – Tribeca. This spring, Tribeca topped out as one of Manhattan’s priciest neighborhood with a median asking price of $4.5M and a median closing price of $3.4M. Though these prices still trump Dumbo where the median closing price is $1.16M this quarter, the neighborhoods have a distinct similarity. Just as 20 years ago Tribeca began to shift from an artists’ outpost to a mecca for luxury lofts and new devs, so too has Dumbo over the last decade.

Dumbo’s raw space, untapped ambiance and isolation that drew people in the 90s has greatly changed in recent years. Although the area is only serviced by the F train at York Street and the A/C trains at High Street, new residents have poured into Dumbo in the last decade as new residential buildings have gone up, overshadowing the neighborhood’s relative inaccessibility and former off-the-beaten path feel.

Buildings and population on the rise in Dumbo

Fear that Dumbo is changing is in some ways misaligned because that change has already occurred – evidenced in both the rise in numerous new developments and in the rise in the asking prices. There is little indication that Dumbo has passed its peak, however, as eight new developments are slated to hit the market in the coming two years, bringing over 550 new apartments and as many 2,000 new residents. 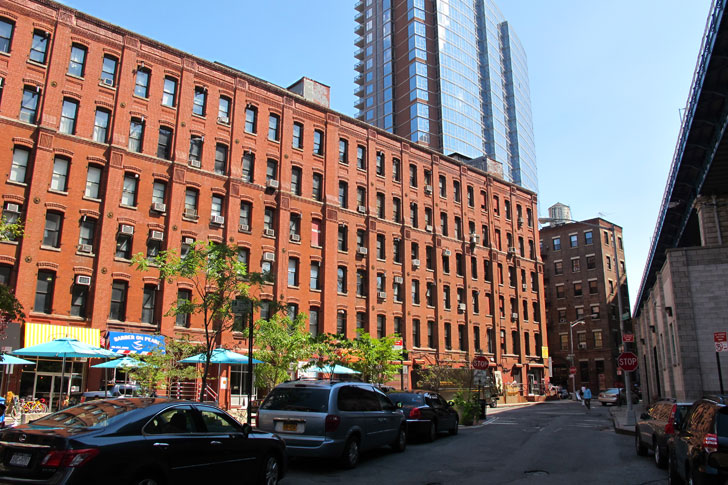 The size and layouts of these new developments lend themselves to the new demographic of residents Dumbo is catering to – namely families. About 10 or 15 years ago, the neighborhood wasn’t really a destination for families. But now with Jane’s Carousel, fancy cookie shops, kid stores galore and more family-friendly housing options, it certainly is. 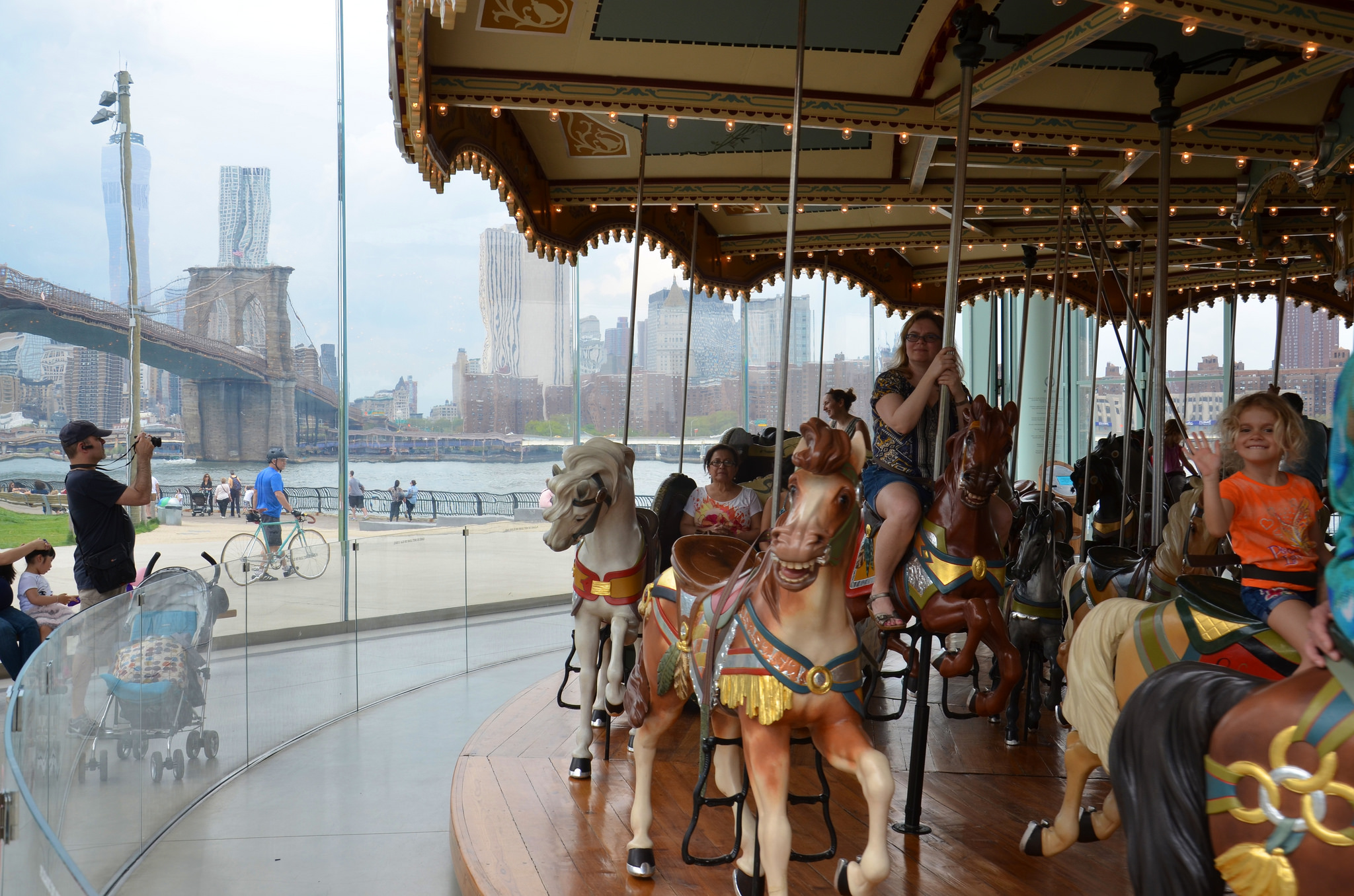 Previously, converted lofts in former warehouses dominated the Dumbo housing stock, offering large, open floor plan one-bedrooms that were good for singles and couples. But now, as new developments bring new housing stock to the area, we are seeing the number of two- and three-bedroom apartments and duplexes outweighing the number of studios and one-bedrooms. Many of these new devs offer amenities like children’s rooms and house kid-friendly businesses in their ground-floor storefront space to cater to families looking to trade in a starter apartment for a long-term family home.

The Beacon Tower at 85 Adams Street, for example, houses an early childhood learning center. 1 John Street, a 42-unit luxury condo currently under construction at the eastern tip of Brooklyn Bridge Park, will include a 1,700 square-foot outpost of the Brooklyn Children’s Museum, which will offer children’s arts and educational classes.  According to the Wall Street Journal, Jared Della Valle, president of the development group behind 1 John, recognized the redevelopment of Dumbo would attract young families and reached out to the museum in hopes of better appealing to this demographic. 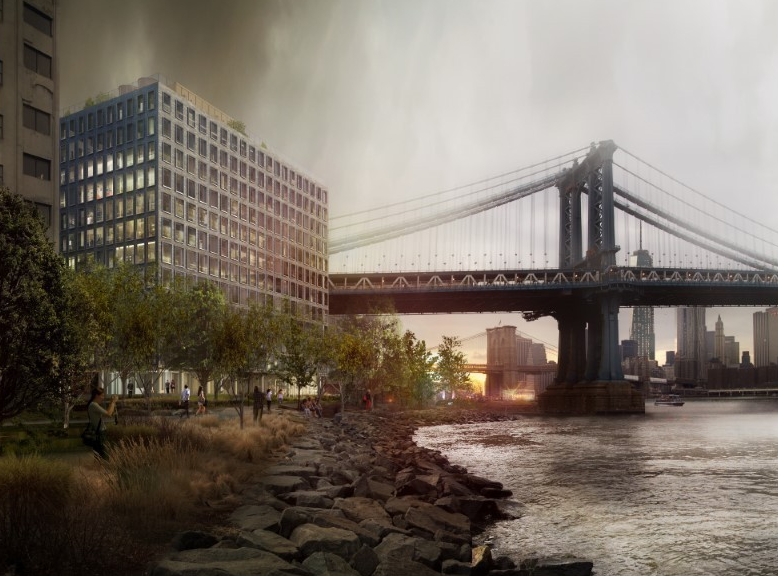 51 Jay Street, another luxury new development rising on the corner of Jay Street and Plymouth Streets, will bring 75 new condos to the neighborhood and offers large, open floor plan multi-bedroom apartments catering to well-heeled families looking to trade up their starter home for long-term investment properties. Twenty-nine of the units are already in contract and 12 remain active. One unit that is still available is a $2.475M three-bedroom duplex spread over two levels (photo below). It offers over 1,750 square feet and brings together the features and finishes of luxury living with a nod to the high-ceiling, tall window-warehouse style of Dumbo’s past. 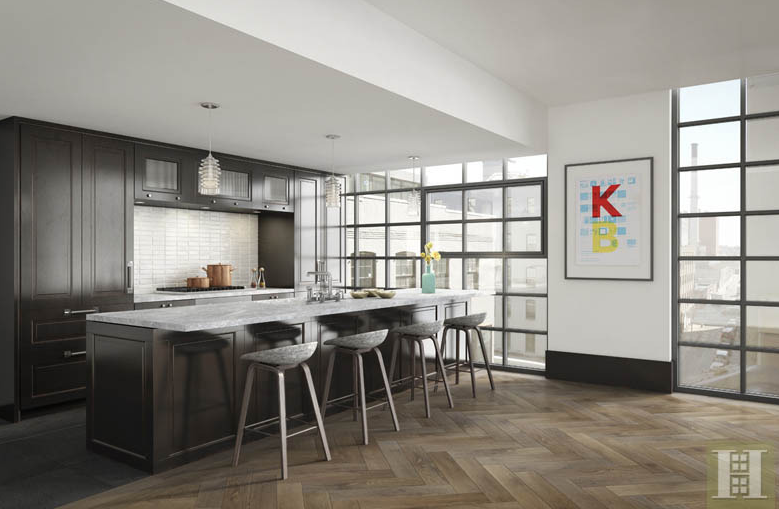 Across the board, units at Dumbo’s new developments are entering the market at luxury prices with the majority listed for well over $2M, including 1 John Street. Of its nine current active listings, all are above $3.5M. A three-bedroom offering over 2,400 square feet is listed for $3.6M (photo below). But for that hefty price tag, you get wide-open views of the Manhattan skyline and the surrounding bridges. 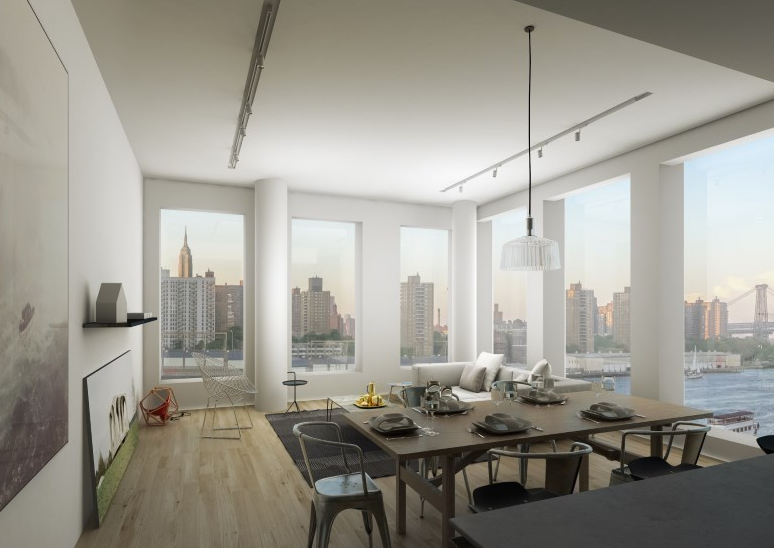 $3.6M three-bedroom at One John Street

The building is among a new vanguard of buildings that are pushing out from the original nexus of Dumbo just to the west of the Manhattan Bridge and truly down under the overpass. WaterBridge 47 at 47 Bridge Street, like 1 John, is on the eastern edge of the neighborhood bordering Vinegar Hill where there still remains land to be developed. Although the building is still under construction and is on the outskirts of the neighborhood, 13 of its units are already in contract and there are only five active listings on the market – indicating serious appetite and interest among buyers. A two-bedroom unit on the third floor is listed at $1.35M and offers two balconies (photo below). 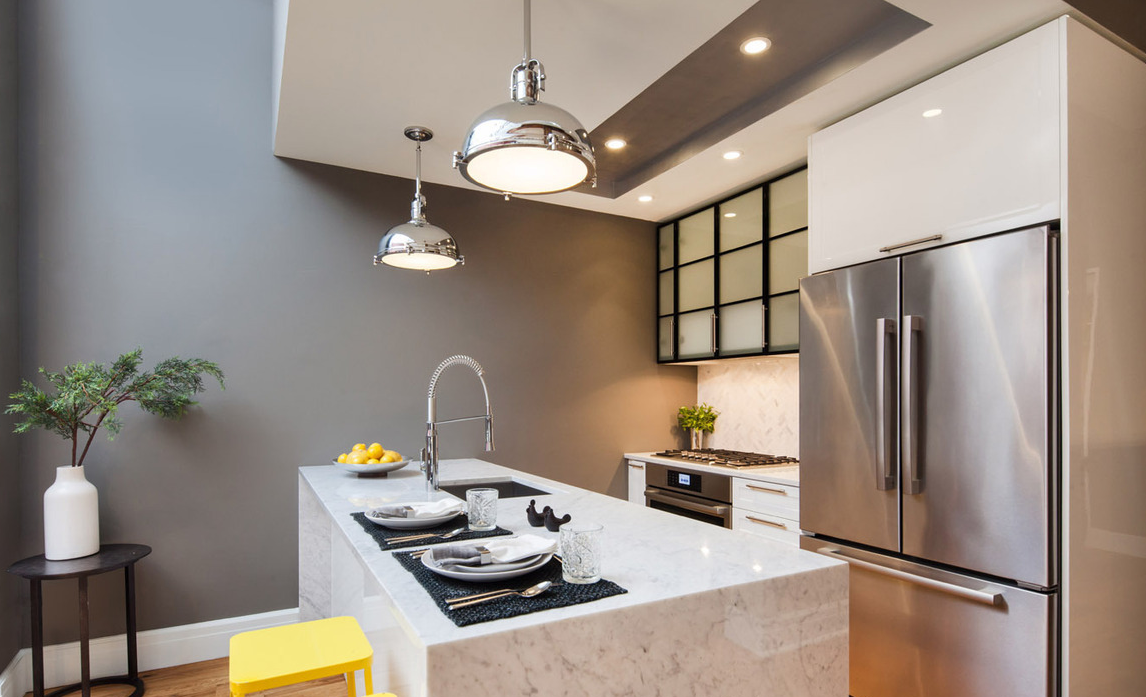 Dumbo predicted to be hottest neighborhood in 2015

Despite all of its six-figure properties, Dumbo topped StreetEasy’s prediction list for hottest neighborhoods in 2015, which ranked neighborhoods according to which showed the highest growth in both asking prices and population. New listings have not had much time linger on the market, as new residents keep moving in, driving up the population and snapping up inventory. This quarter, the median time on market was just 22 days. Compare this to Downtown Manhattan and Tribeca where median time on the market is 55 and 67 days, respectively.

With its influx of new residents, proliferation of luxury new buildings and rising prices, Dumbo is on pace to hit the heights of Tribeca. Without a doubt, both of these neighborhoods have fully transitioned to highly coveted, high-priced areas, far more accessible to top-tier earners and their brood than up-and-coming artists. Galleries, studios and performing art space are all but gone in Tribeca and the same could soon be said of Dumbo where upscale cookie shops and kids stores fill the storefront space of the former warehouses. The St. Ann’s Warehouse, a major player in the Brooklyn performing arts scene, was relocated from its space at 38 Water Street to make room for a 17-story new development named 60 Water Street. Recently, however, the impact all this new development has had on the cultural scene and the neighborhood has come to a head. 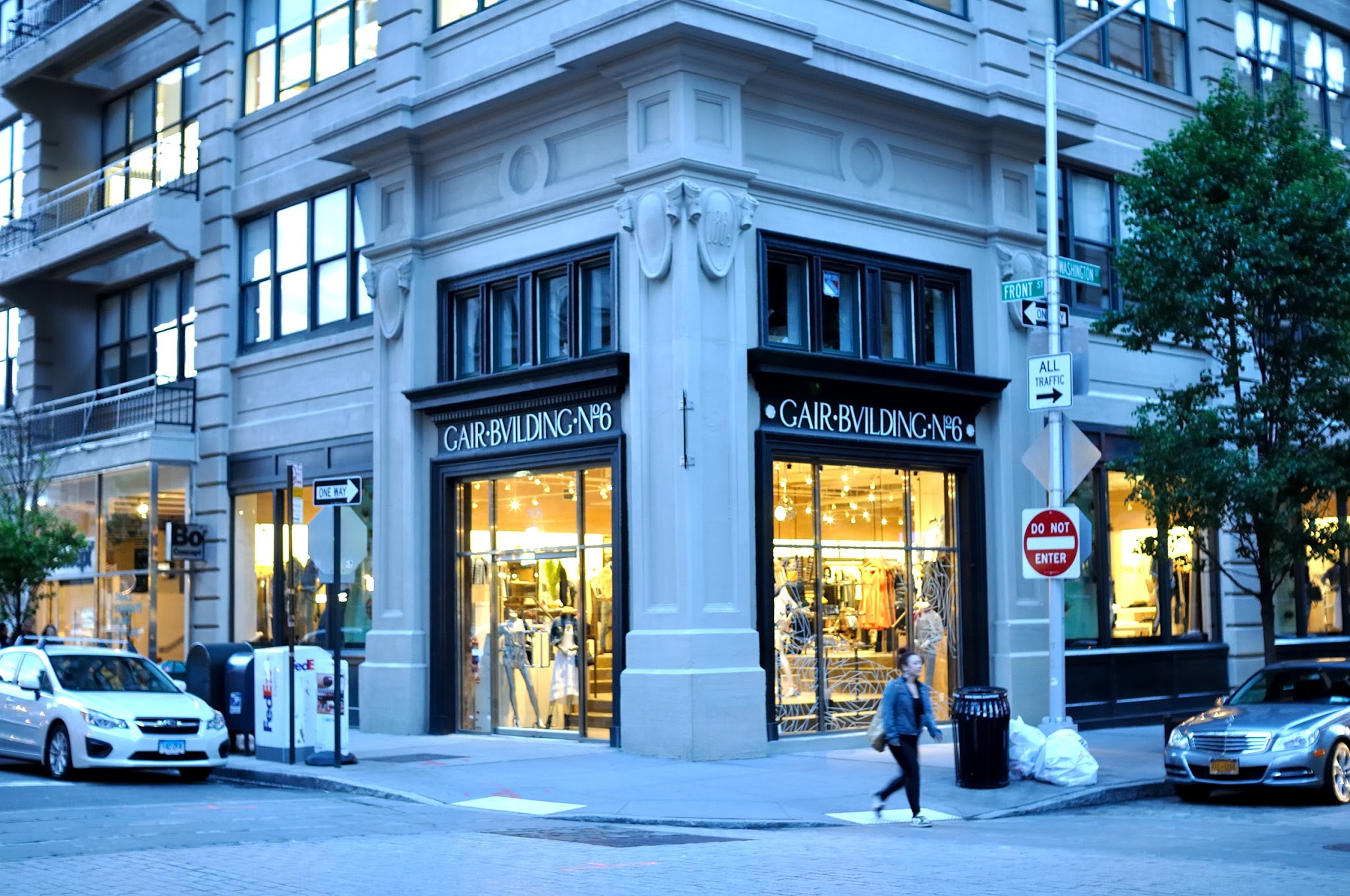 What do all the new devs mean for Dumbo’s arts scene?

Just this week, Two Trees – a major development company instrumental in Dumbo’s real estate boom and responsible for the development of 60 Water – announced the winners of the Cultural Space Subsidy Program. The grant provides below-market rate rents for local artists and arts organization. Although Two Trees has offered below-market rate space to artists in the past, this announcement marks a formalization of the process and a concerted effort to maintain the neighborhood’s cultural heritage and artistic vibe.

In a surprising change of plans, Two Trees, however, also recently decided to cancel the widely popular Dumbo Arts Festival for fear that it was becoming too popular and attracting too many people to the neighborhood. Last year, the event drew 220,000 visitors to the neighborhood and featured major corporate sponsorships from the likes of Tito’s Vodka and AT&T. According to the festival director, “The companies helped pay for the arts programming, but also started a wave of commercialization that made the organizers uncomfortable.” 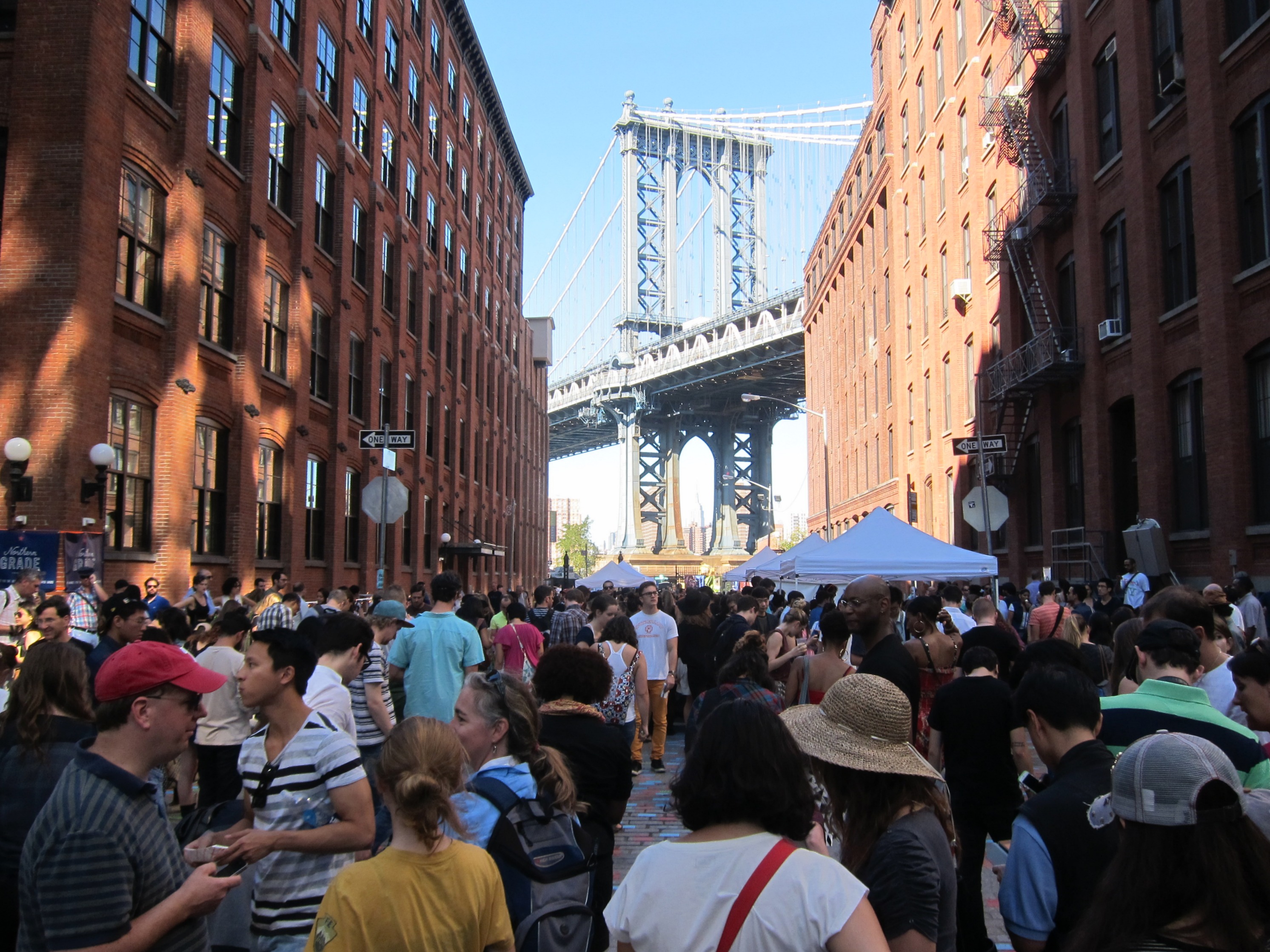 The commercialization of the Dumbo Arts Festival in many ways parallels that of the Tribeca Film Festival, which this year is sponsored by AT&T and VDKA 6100, a natural vodka from New Zealand. Although the Tribeca Film Festival launched as a response to Sept. 11 and as a way to showcase the resilience of the neighborhood, it always positioned itself as major, highbrow arts event where corporate sponsorship, international attention and large crowds were simply par for the course.

If the developers behind Dumbo’s new luxury buildings are as eager for the neighborhood to reach the heights that the wave of new buildings suggest, they may have to relinquish their hopes of maintaining the neighborhood’s former art scene. For all intents and purposes, developers in Dumbo have embraced the luxury market and its buyers. Now if the arts scene is overshadowed by glassy buildings and corporate sponsors as a result, the developers and community in Dumbo may just have to face the music and dance.