Manhattan condo prices set a record in July as resales of existing units traded at a 19-year high, according to the StreetEasy® Condo Price Index. While slowing price appreciation earlier in 2014 hinted that condo price growth would moderate or decline, stubbornly low inventory instead fueled a resurgence in prices in June and July that is expected to continue into August, according to the StreetEasy Condo Price Forecast.

The number of for-sale condos in July fell 1.7 percent from June, following a seasonal downturn during the traditionally slower summer months. Despite a promising second quarter and five consecutive months of modest inventory gains at the start of 2014, total inventory in July was still 16.2 percent below the five-year monthly average for Manhattan.

July’s condo inventory was dominated by units priced in the top – or most expensive – tier. Just under half (45.3 percent) of all units listed during the month were priced above $1.9 million. The bottom – or least expensive – tier continues to see the smallest share of available condos, with just 23 percent priced at or below $914,000. Although the share of condos priced in the bottom tier increased slightly from a year ago, the absence of a meaningful addition of lower-priced inventory in July means many buyers in this segment will see little to no relief in finding an available unit this summer. 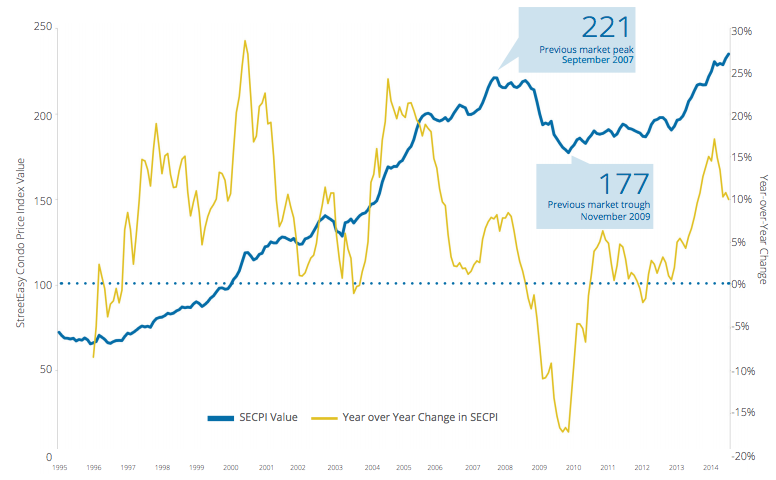 Overall, the market has been starved for more supply and July’s growth in prices is a direct result of fewer units available on the market. The hope was for a greater lift from the busy spring months, but with inventory still so far below normal, condo prices will continue to hover at or above record highs.

GET THE FULL REPORT IN PDF FORMAT