Across Manhattan, condo prices have increased to record highs in large part because of historically low inventory. Released last week, the February 2015 StreetEasy Manhattan Condo Market Report shows the total number of condo units available for sale fell to just 3,175 during the month – the lowest level ever recorded by StreetEasy.

In Manhattan’s Midtown submarket, however, inventory is booming. The number of condo units available for sale in greater Midtown (which includes Central Park South, Midtown, Midtown East, Midtown South, and Midtown West) grew by 10.5 percent from last February, the only submarket to experience a yearly gain in inventory. Most of this growth is driven by a surge of inventory in Midtown West, which saw the number of units available for sale increase by 29.4 percent from last year. 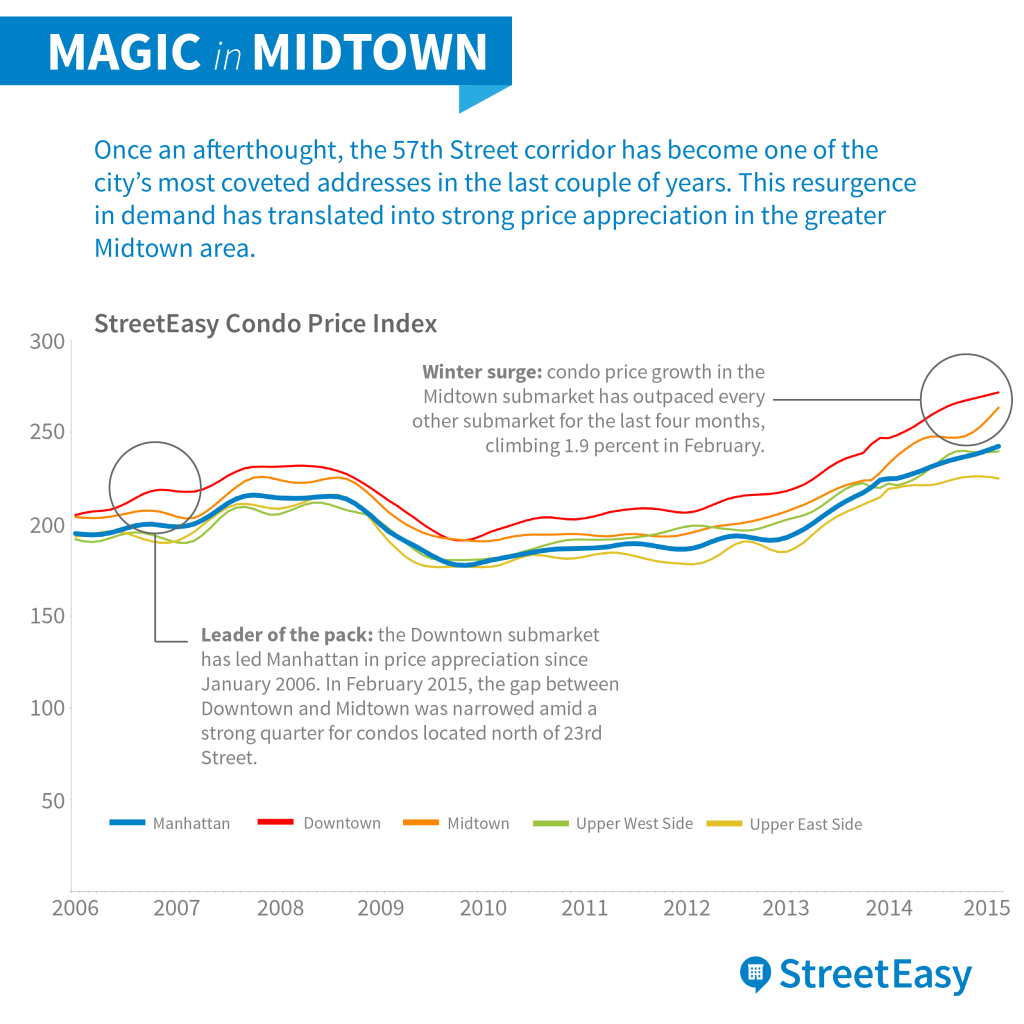 While supply is growing in Midtown, prices appreciated at nearly triple the Manhattan rate in February. According to the StreetEasy Condo Price Index, condo prices in Midtown grew by 1.9 percent in February while the Manhattan-wide condo price growth rate was 0.7 percent. In fact, February was the third consecutive month in which monthly Midtown condo price growth bested Manhattan’s. In its current trajectory, Midtown may soon overtake Downtown as the submarket with the highest price appreciation – a title that Downtown has held since January 2006.

What is behind Midtown’s resurgence?

The rise of mega-tall luxury buildings like One57, which began selling units in 2013, and 432 Park Avenue, the tallest residential tower in the Western hemisphere, have certainly helped to attract buyer attention in Midtown. This is a classic case of a rising tide lifting all boats: as more luxury units are built, neighboring existing condos may also begin to sell at a higher price. The 57th Street corridor – once an afterthought to the luxury condo market – has emerged as one of the most coveted addresses in New York City. So expensive are many of the condos that are sprouting up along 57th Street that it has been dubbed “Billionaire’s Row.” In 2014, the median sales price for units in One57 was a staggering $21.1 million.

The center of gravity in Manhattan’s luxury condo market is moving uptown. Will Midtown continue to heat up – or will the purported oversupply of billionaire penthouses in the area lead to a sharp correction in prices? Only Midtown buyers will truly decide.