New York City Architecture 101: How to Talk About Buildings 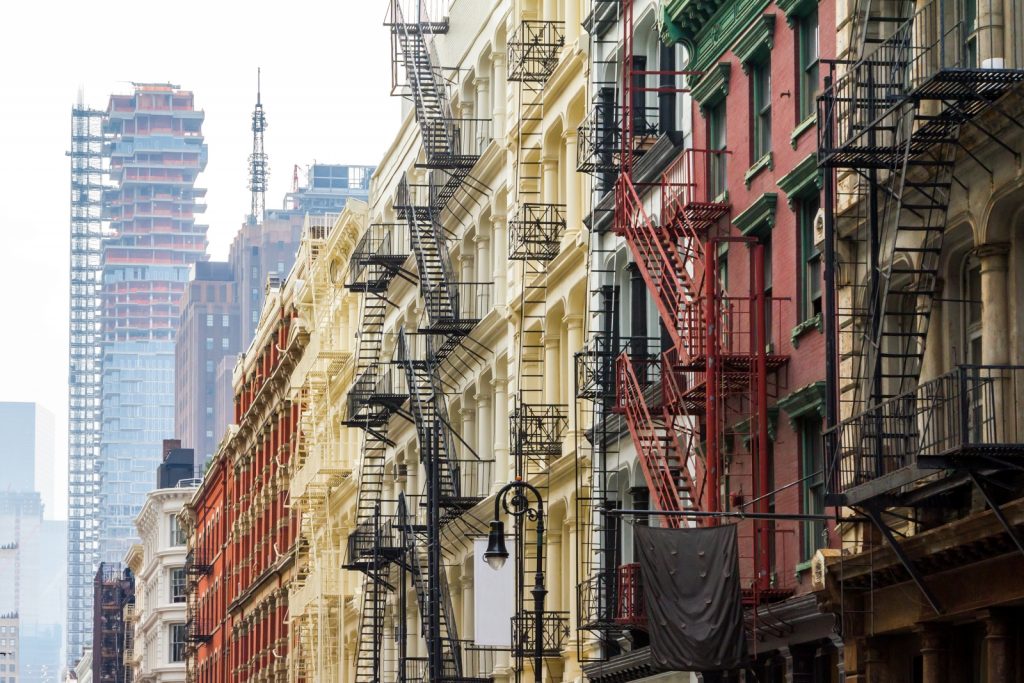 So you’re trying to choose between one new apartment and another, and you’re telling your roommate or significant other that you like apartment A — in part because of that cool building it’s in. You know, that stately old building with all the, the … things on it. And your roommate says, uh-huh, yes, the things, I love those things, too. Let’s live in the place with the things.

Those things have names. Wouldn’t it be fun to know them? It would! So here’s a quick guide to New York architecture — those things on buildings you always wanted to refer to but didn’t know the names of, plus some residential building styles you’re likely to run across in NYC. Because “things” are pretty, but names are useful. 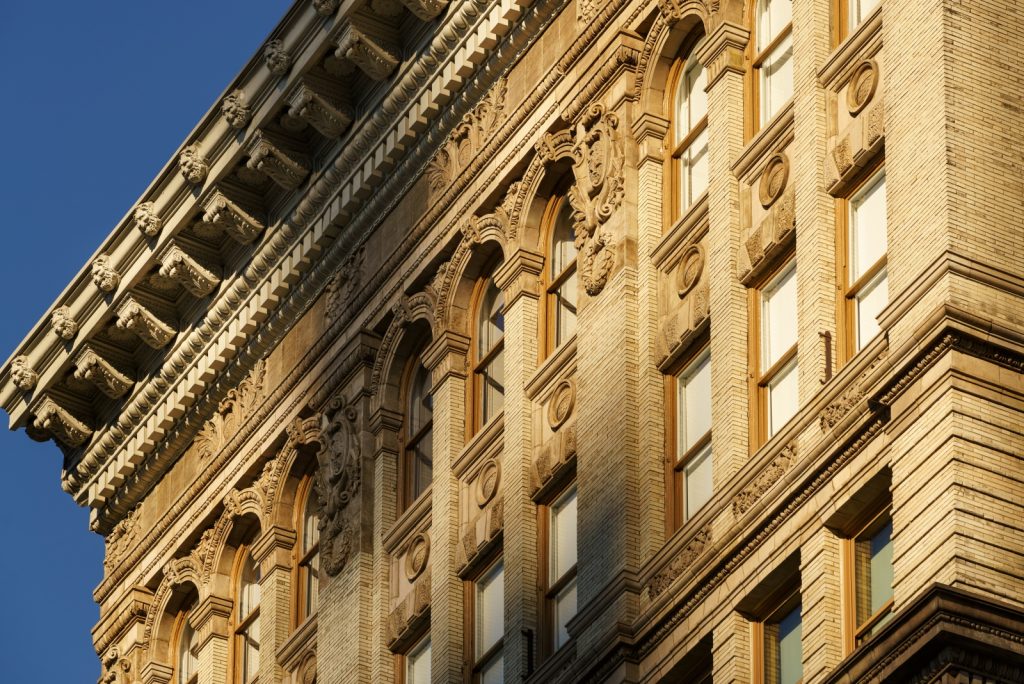 Here’s a SoHo building with a serious cornice.

That big, decorative beam at the very top of a building or wall is a cornice … 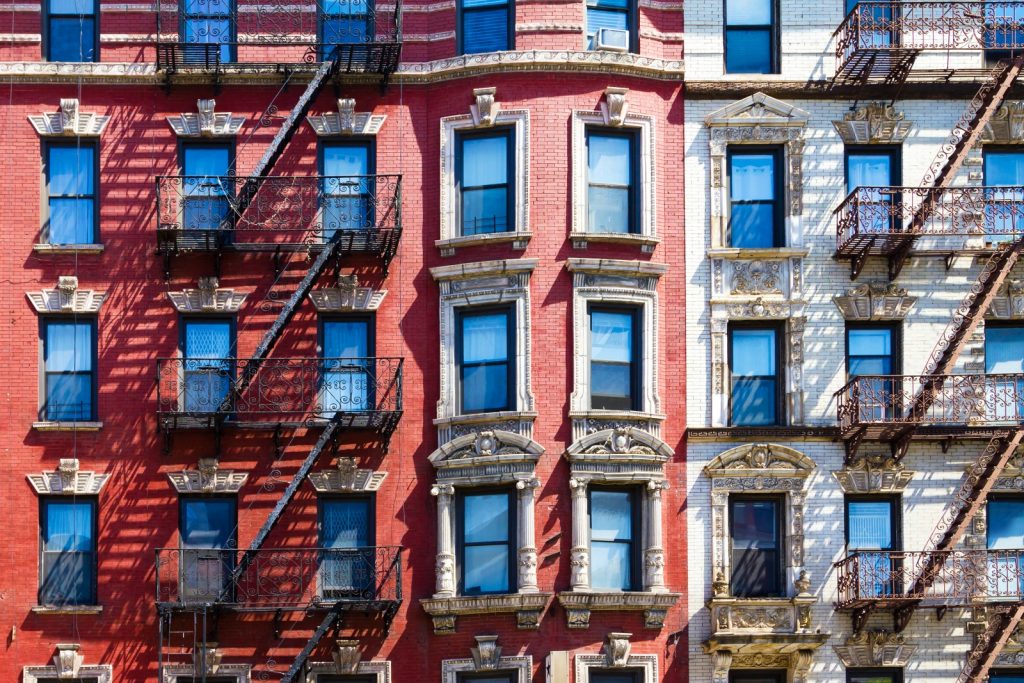 Note the decorative lintels above some windows on these apartment buildings. The more elaborate rounded and triangular shapes are pediments.

… But the smaller horizontal beam above a door or a window is a lintel. 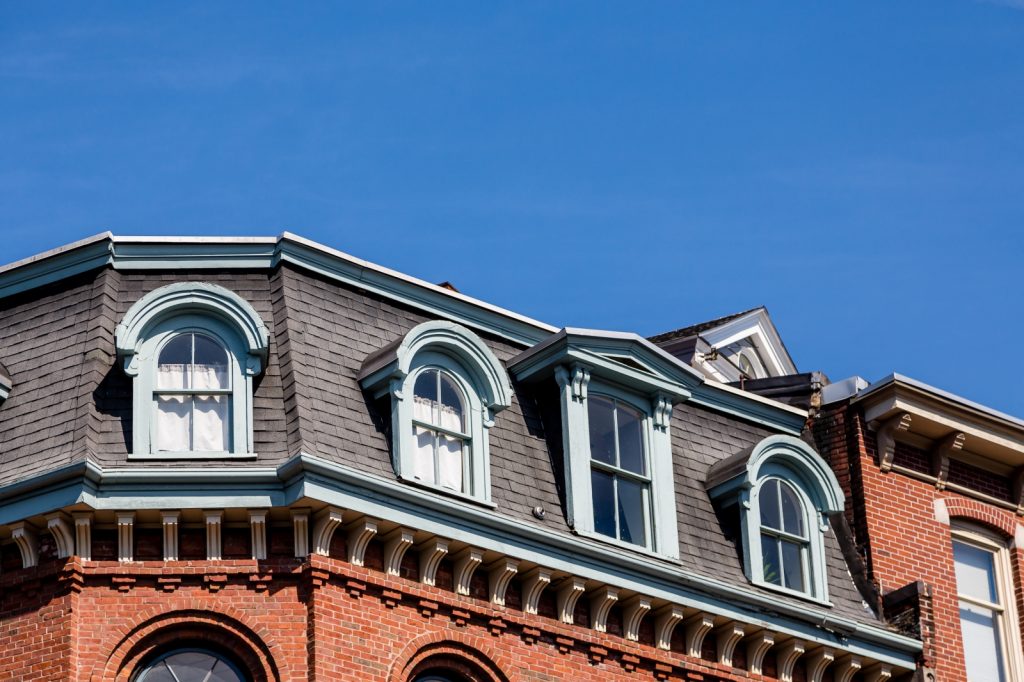 Once you learn to spot a mansard roof, you’ll see them everywhere.

A mansard roof is when a building looks like it pulled its roof down over its eyes (er, windows). It’s basically a steep, often shingled roof with windows in it — common in France and French-style buildings. 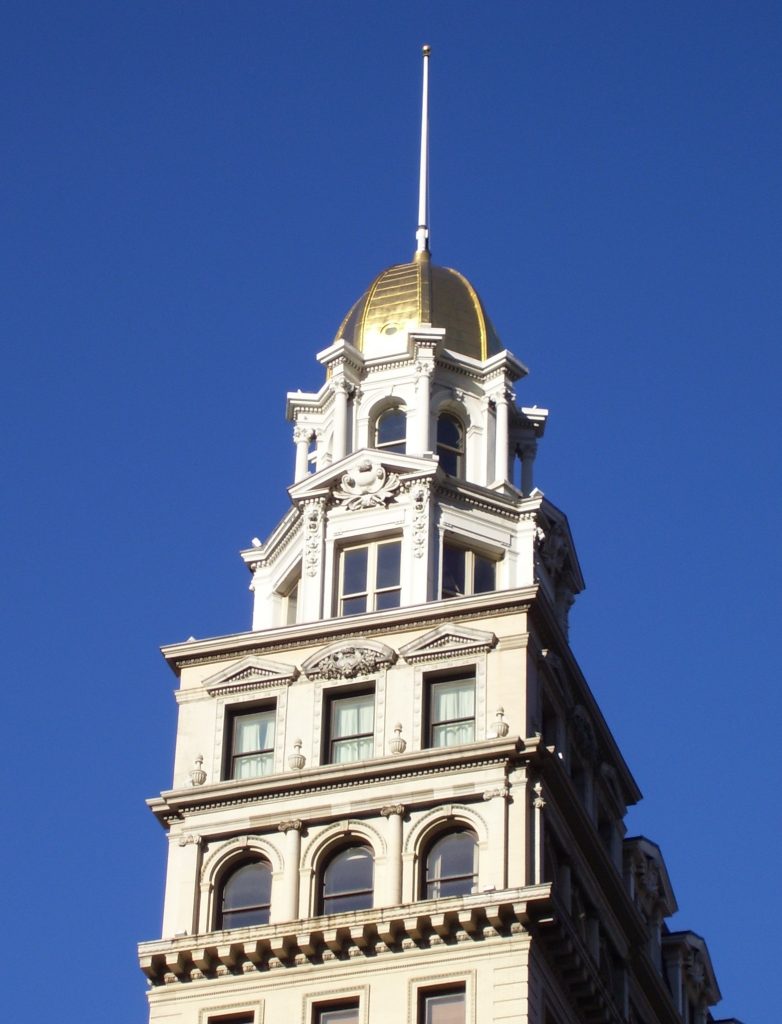 The cupola on the Sohmer Piano Building on Fifth Avenue. Or is it a dome? Yes. (Source: Beyond My Ken/Wikimedia)

A cupola is easy to confuse with a dome, because it’s basically a small dome on top of a roof (or on top of a larger dome), although it might be square instead of round. Confusing! 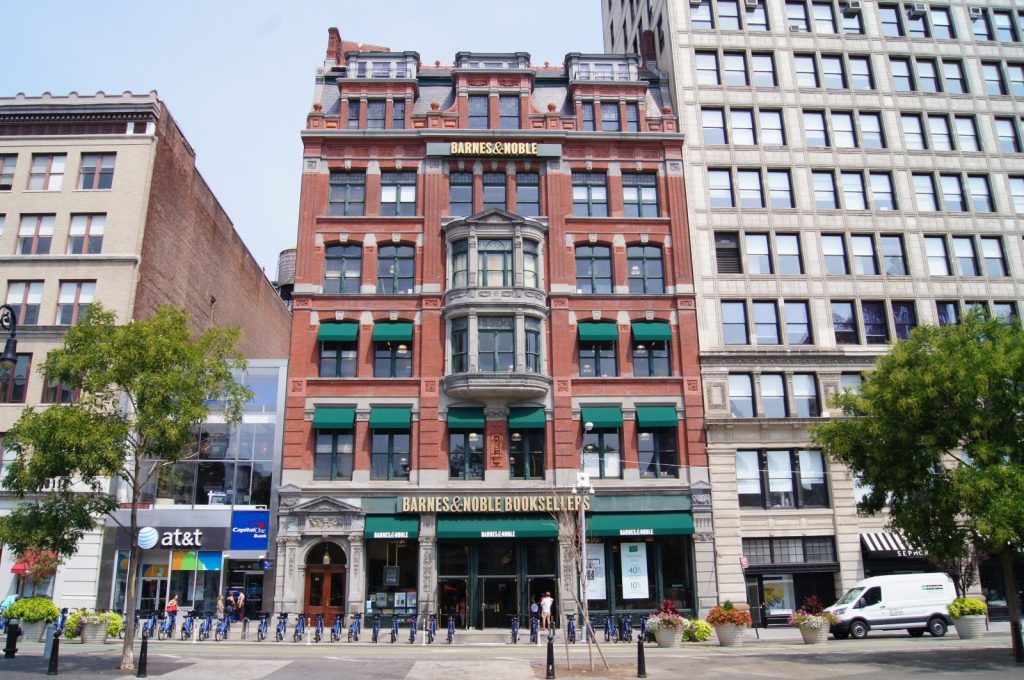 There’s a nice oriel in the center of this building on Union Square, now occupied by a Barnes & Noble.

You can call them bay windows if you want, but oriel is the general term for a protruding window that doesn’t reach the ground — common on older buildings around NYC. 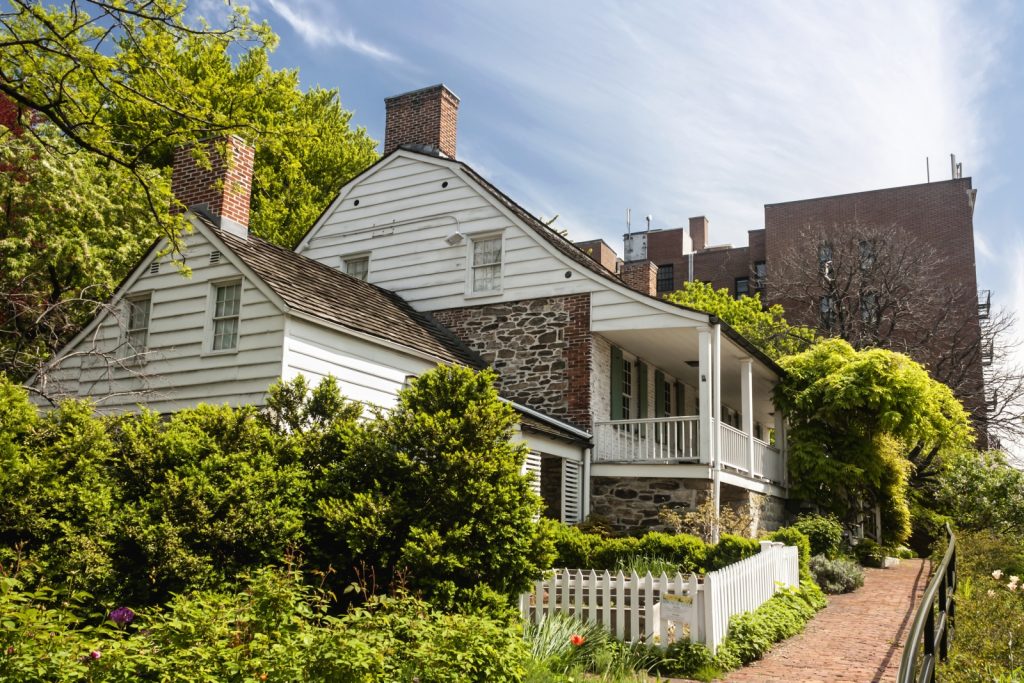 Here are two gables of the Dyckman Farmhouse in Upper Manhattan, the oldest remaining farmhouse in New York.

Gables usually come in pairs, except in creepy Hawthorne novels when they come in sevens. It’s the triangular wall under a sloped roof, or, commonly, the whole end of a building, including the sloped roof and wall. Somewhat common in NYC, but you’ll see ‘em everywhere in New England. 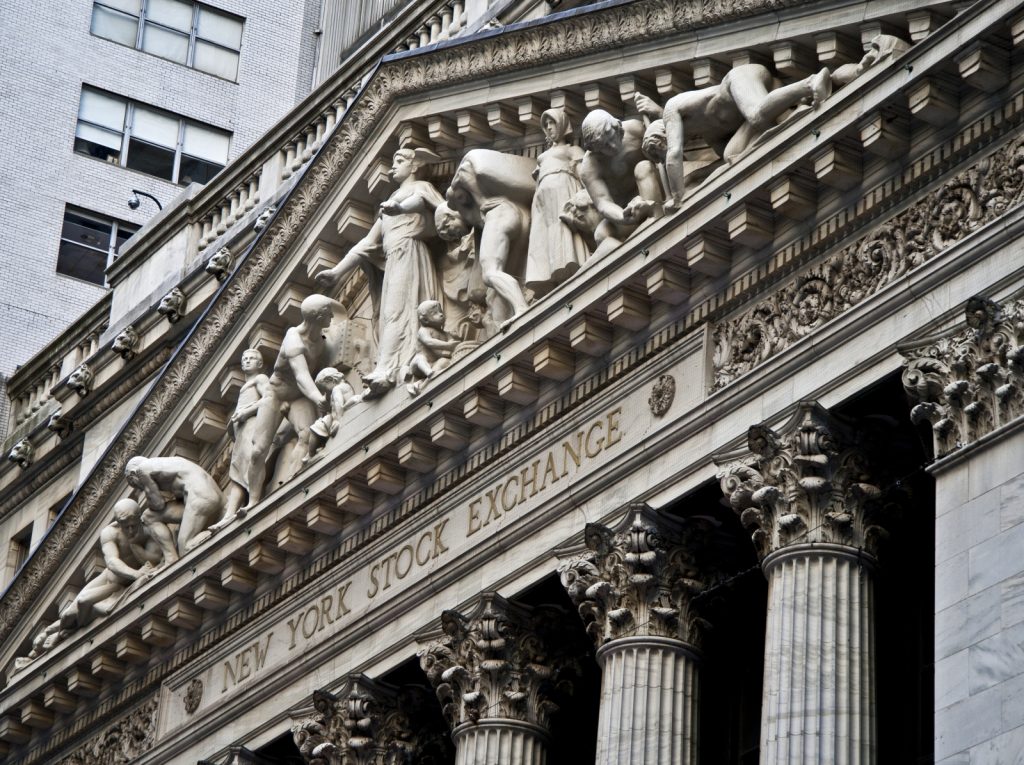 A pediment is usually a type of gable: a gently sloping rounded or triangular element under a pitched roof or above a doorway or window. Very common in NYC. 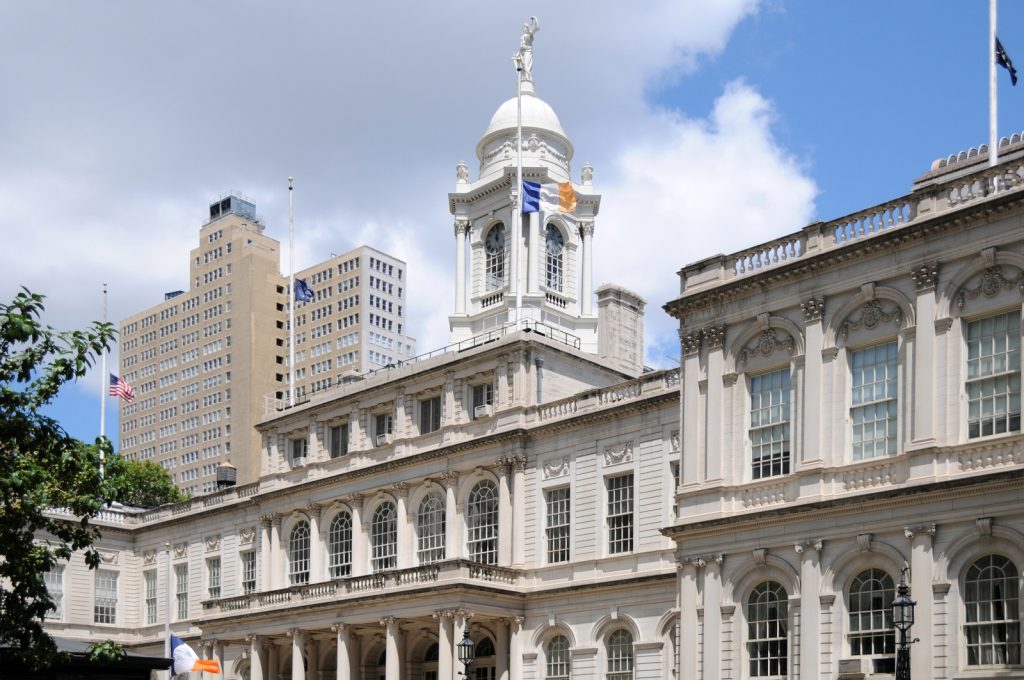 See those column-shaped rectangles between the arched windows of New York City Hall, on the far right of the image? Those are pilasters. And that round thing on top is a cupola for sure.

When a column isn’t really a column — when it remains attached to a wall instead of standing on its own — it’s a pilaster. 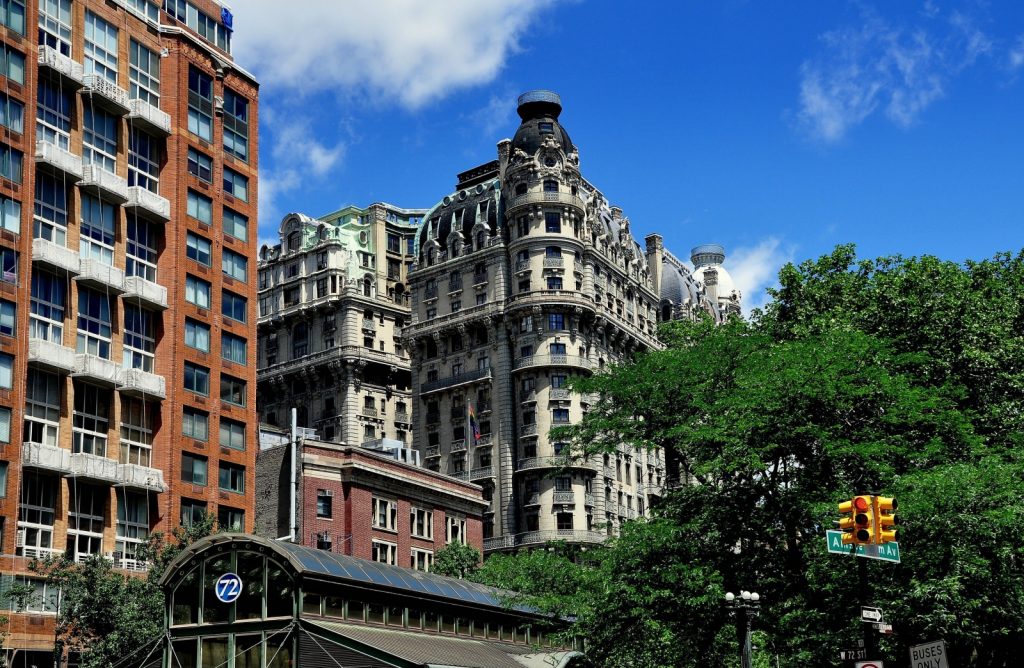 If you’re lucky enough to live in the Ansonia building, you’d better know that the round thing in front is called a turret.

The round towers sticking out from buildings are called turrets. You’ll find them on some brownstones in Brooklyn and on grand old buildings like the Ansonia on the Upper West Side. 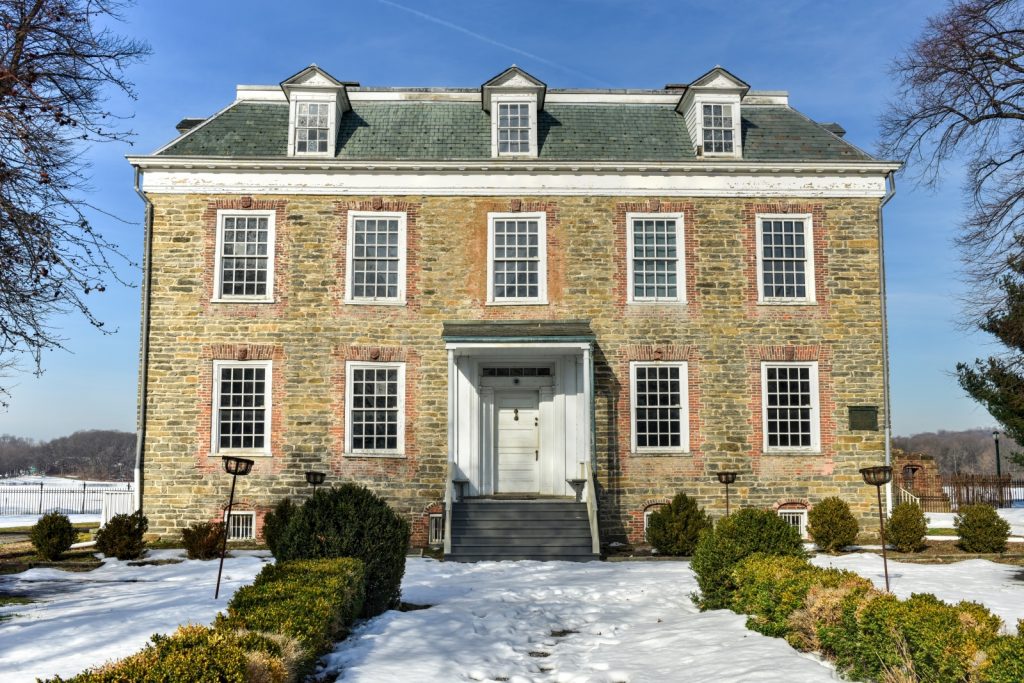 The three windowed protrusions at the top of the Bronx’s Van Cortlandt House are dormers.

A dormer is a small structure projecting from a roof that contains a window. You might not see them on many Manhattan apartment buildings, but they’re common on houses in Brooklyn and Queens.

Even a structure that might seem to belong to its own category — like, say, the classic brownstone — is really just a rowhouse that can come in any number of architectural flavors. Here’s a sampling of some of the more common varieties. 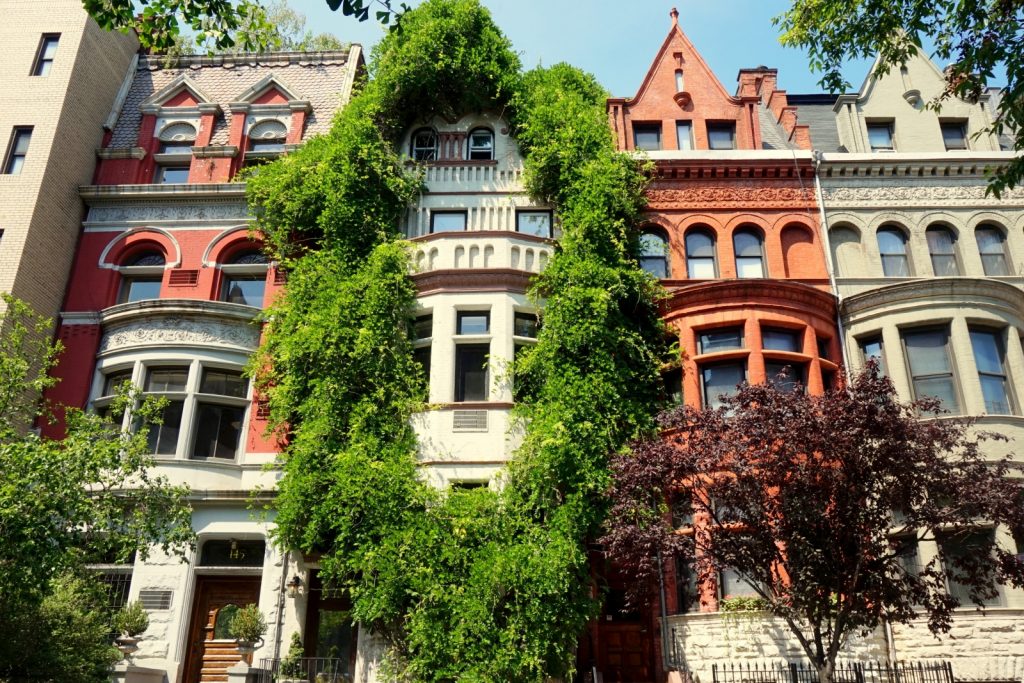 If it’s funky-looking, like these townhouses on the UWS, it’s probably Queen Anne. 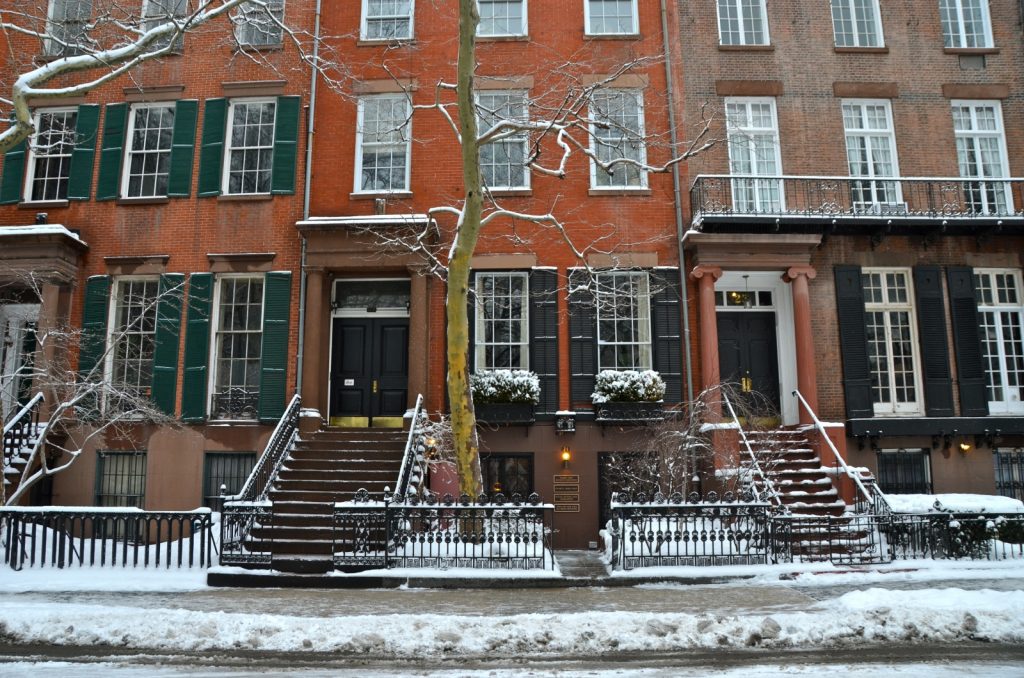 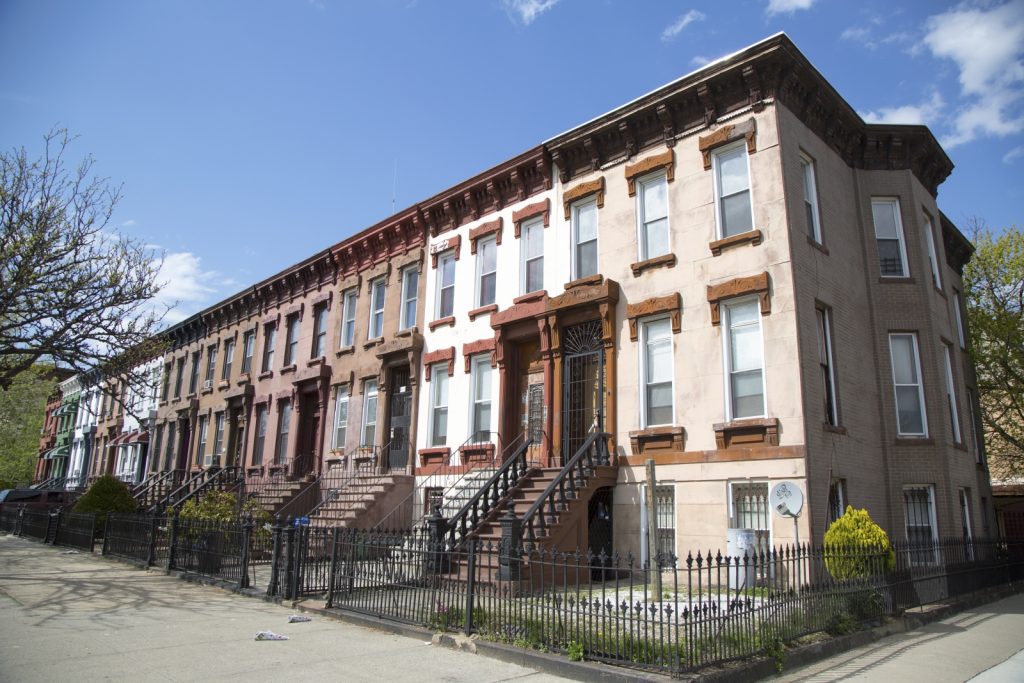 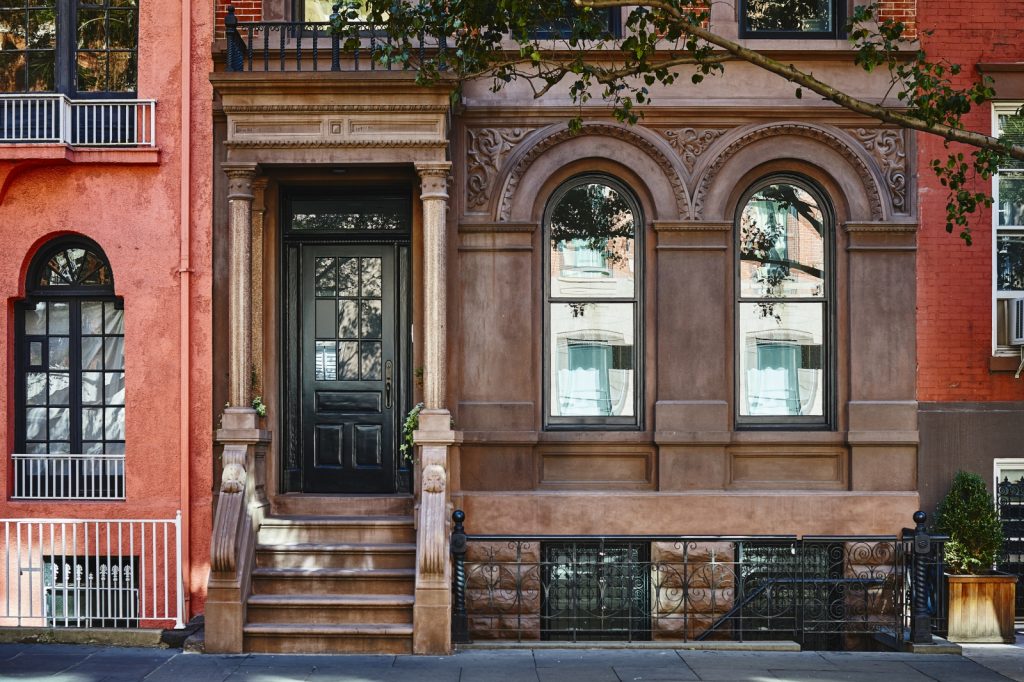 Romanesque revival: This means heavy forms: thick arches above the windows, and often a surface of rock or masonry. Designs can be straightforward or include ornate, leafy details. 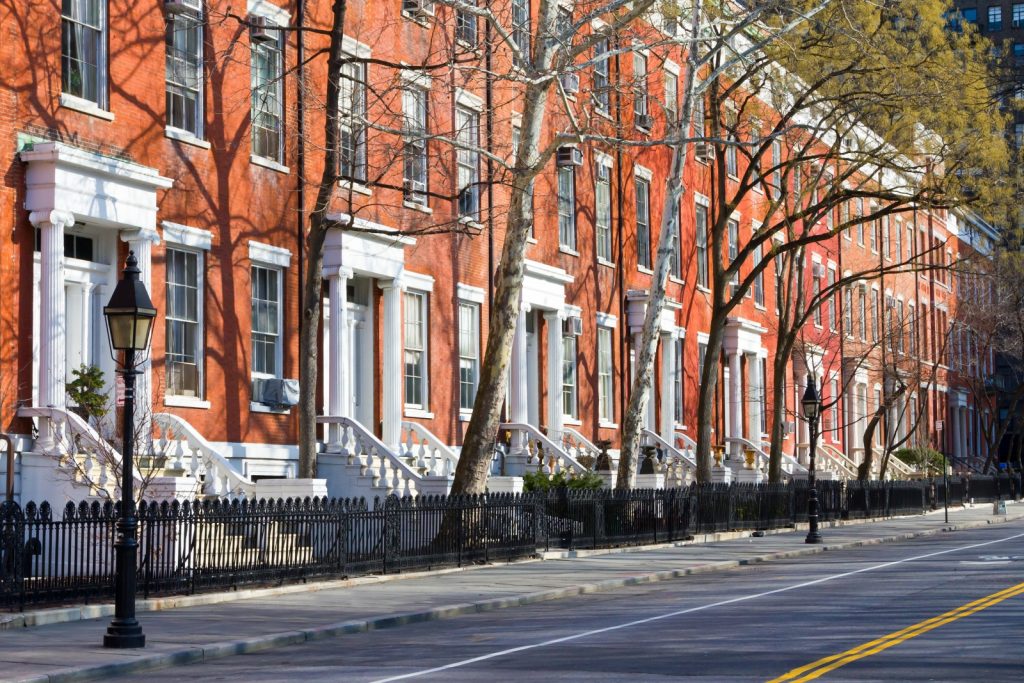 Nope, these are not Federal-style, but Greek revival buildings in Greenwich Village.

Greek revival: Squint and it may look like Federal style, but Greek Revival is slightly different: These buildings don’t have shutters on the windows; their bricks are laid differently; and protruding details like the columns and pediments are exposed more clearly. 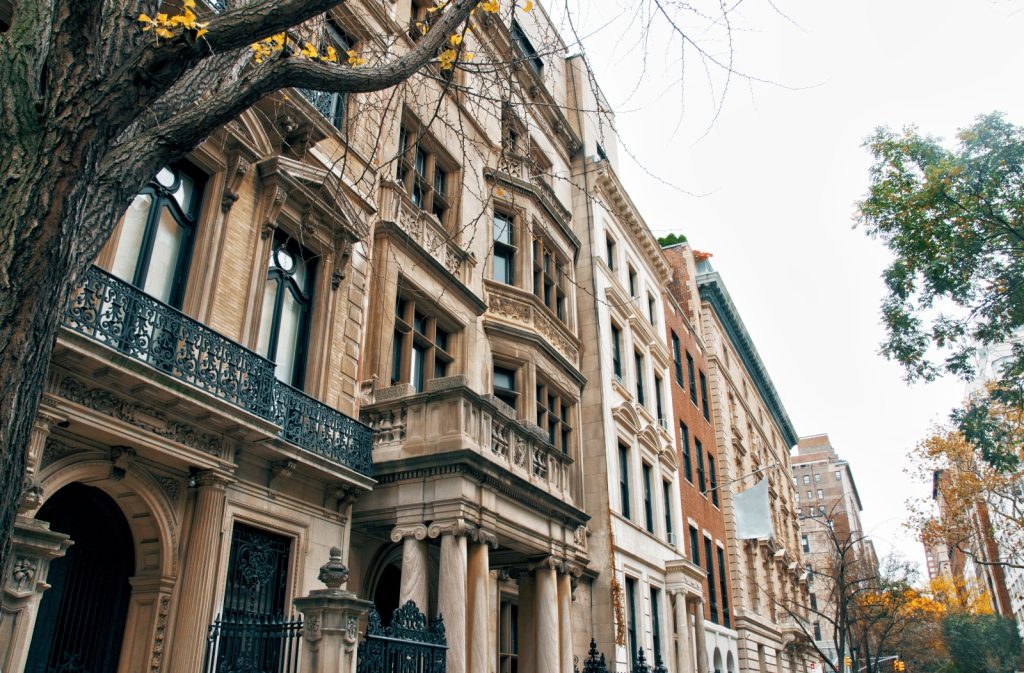 On the left, an intricate Beaux-Arts building on the Upper East Side.

Beaux-Arts: If you think “faaancy” when you see a building, it might be Beaux-Arts. This style comes with intricate detailing, a low stoop, and a mansard roof. Basically, a Beaux-Arts building looks like a Paris destination — or the backdrop for a Louis Vuitton ad.

Sometimes, buildings appear to be a combination of several different architectural styles, and labeling them as one or the other can be a challenge. For help with brownstones in particular, though, the city’s Landmarks Preservation Commission put together a helpful and now-classic PDF guide to common architectural styles.