Cranes and construction are a part of life in New York City these days, but despite a glut of new high-priced supply, New Yorkers are going to new lengths to find convenient, affordable homes. In this installation of our Changing Grid series, we look at the rental market impact of the 2017 expansion of the NYC Ferry system. What happens when relatively affordable areas suddenly become more convenient and accessible to New Yorkers?

Over the summer, ferry service on the East River became both farther-reaching and more affordable.[1] The city’s moves to lower prices and open new stops held the potential to substantially cut the commutes of those living in the immediate vicinity of the stops, particularly in areas not previously well-served by public transportation. For those seeking a new home, the reduction in price and expansion of the ferry service can present new options in waterfront areas that might previously have been affordable but impractical. Agents advertising properties near the ferry stops are quick to point out these benefits to potential tenants: 30 percent of the more than 1,000 Brooklyn and Queens listings from within a 10-minute walk of a ferry stop advertised proximity to the stop as a benefit of renting.

To gauge the effects of the expanded ferry service on New York City real estate, we looked at rents within a 10-minute walking distance of ferry stops, and compared changes in these rents over the past year to those within a 10- to 30-minute walk to the ferry, which presumably benefit far less from access to it. 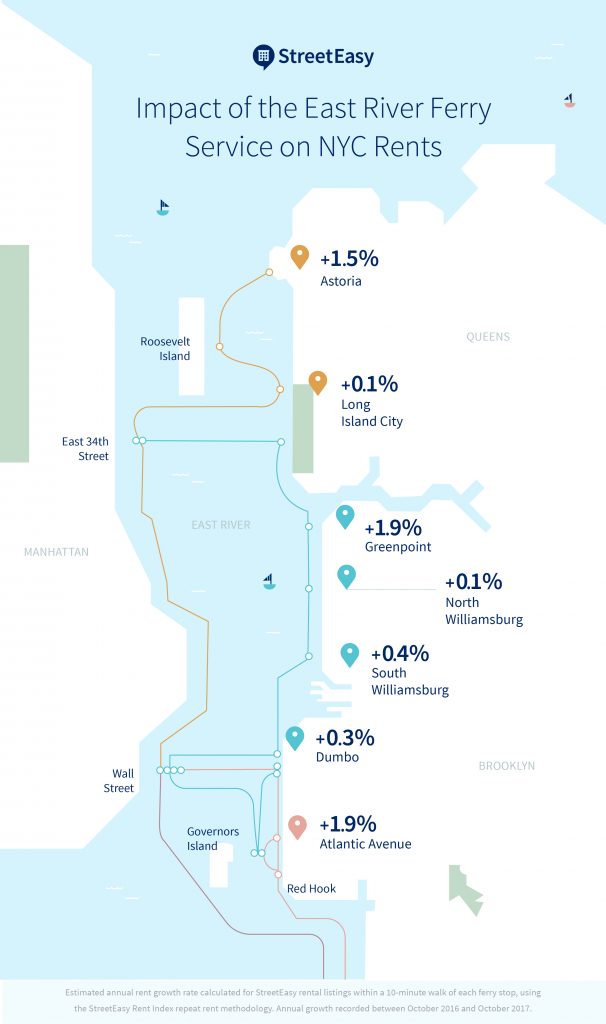 Our analysis showed that rents within a 10-minute walk of the Atlantic Avenue, Greenpoint, and Astoria ferry stops increased at a consistently higher pace than those in the broader area.[2] Rents in these ferry-adjacent areas increased by roughly 1.5 to 2.0 percent from October 2016 to October 2017, whereas rents in the broader areas surrounding the ferry stops rose at only modest rates, less than 0.5 percent. The striking uniformity of these effects is further evidence that there is a clear, if only moderate-size effect on real estate prices from this summer’s ferry service expansion.

A Matter of Cost and Accessibility

For homes within a 10-minute walk of the Dumbo, Williamsburg, and Long Island City (LIC) ferry stops[3], our analysis shows no such noticeable difference in the growth of rent when compared to homes in the broader areas. Rents in each of these areas, like those further away from the Atlantic Avenue, Greenpoint, and Astoria stops, grew at modest rates of less than 0.5 percent.

Homes near the Dumbo, Williamsburg and LIC stops already benefited from access to the more expensive and less frequent ferry service before this summer, as did homes in Greenpoint. However, homes in these areas also share two key attributes that help explain why ferry service has not had a noticeable impact on rents in the past year. First, they already enjoy relatively convenient subway access to Manhattan from the A, C, F, L, J, M, Z, and 7 trains. Stops for these lines are all close to a 10-minute walk from the ferry docks. Second, and more importantly, rents for homes near the Dumbo, Williamsburg, and LIC ferry stops are substantially more expensive than the others, with median annual[4] rents of more than $3,000 per month, compared to less than $3,000 in the other areas. For many New Yorkers seeking both convenience and affordability, these neighborhoods have provided few options. As a result, the increase in rental market demand after the ferry service changes are not as significant.

The smaller amount of rental housing stock and lower rental turnover rates make the impact of the ferry service’s extension to Roosevelt Island, Red Hook, Sunset Park, Bay Ridge, and the Rockaways more difficult to gauge. Nonetheless, limited evidence suggests that housing near the ferries in these areas is in increasing demand. In both Sunset Park and Bay Ridge, a majority of the handful of units listed for rent in both 2016 and again in 2017 went up in price when listed the second time. Furthermore, a growing share of rental listings in these neighborhoods — more than 20 percent collectively in July — are advertising proximity to ferry service as an attraction.

Impacts May Increase as Ferry Travel Becomes a Way of Life

As of October 2017, impacts of ferry service in the affected areas are somewhat modest: A 1.5 percent increase on a $2,500 lease amounts to $37.50 per month. However, larger changes could be in store as more New Yorkers look to the water for their daily commutes, and New York’s grid adjusts to the flow of the ferry system.

Ferry service will be a boon for residential developments like a condo tower under construction in Greenpoint and a rental megaproject at Hallett’s Point. Time will tell how commercial office space reacts to the influx of workers now able to commute via ferry. Growing ferry service could also benefit firms such as Booking.com, the travel-tech giant and owner of sites like Kayak and Priceline, which signed a lease earlier this month for 53,000 square feet at 28 Liberty St., a short walk from the Pier 11 ferry stop in the Financial District.

The trends we see at work along the water in Brooklyn and Queens are not only relevant for those who live in or plan to move to the areas near the ferries. In 2018, service will expand again, with stops in the Lower East Side, Stuyvesant Town, and Yorkville in Manhattan, as well as Clason Point in the Bronx. Both this year’s expansion as well as the planned 2018 expansion were among several laid out in a comprehensive study commissioned by the city in 2013. Should these efforts succeed in helping New Yorkers make the most of the city, many more additions could be on the way.

To evaluate the change in rents from the prior year, we applied the same repeat rent methodology that we use for our StreetEasy Rent Indices to areas within a 10-minute and 10- to 30-minute walking distance of each ferry stop. We calculated timed walking distances surrounding each ferry stop using tools from Mapzen.

[3] Beginning in May 2017, fares that were previously set at $4 each way on weekdays and $6 each way on weekends were slashed to a flat $2.75 each way, equal to a subway ride. Prior to this summer, ferry service was limited to two lines, with stops in Long Island City, Greenpoint, Williamsburg, and Dumbo connecting to Midtown and the Financial District. Service expanded in May to Sunset Park and the Rockaways, and then again in June, with stops at Atlantic Avenue, Red Hook, Sunset Park, and Bay Ridge. In August, a third expansion connected Astoria and Roosevelt Island to existing stops. Ridership on the expanded lines immediately exceeded the City’s expectations, forcing the City to adjust plans for future demand.