The StreetEasy Market Reports include extensive data and analysis for Manhattan and Brooklyn. Below are Brooklyn highlights. If you would like to read about the Manhattan market, click here.

The median resale value of all Brooklyn homes reached an all-time high at the close of the second quarter according to StreetEasy’s Brooklyn Price Index (BPI), although annual price growth slowed to less than half the 2014 annual growth rate. While the resale value of Brooklyn homes grew by 10.1 percent in 2014, the year-over-year price growth in June 2015 slowed to 4.1 percent. 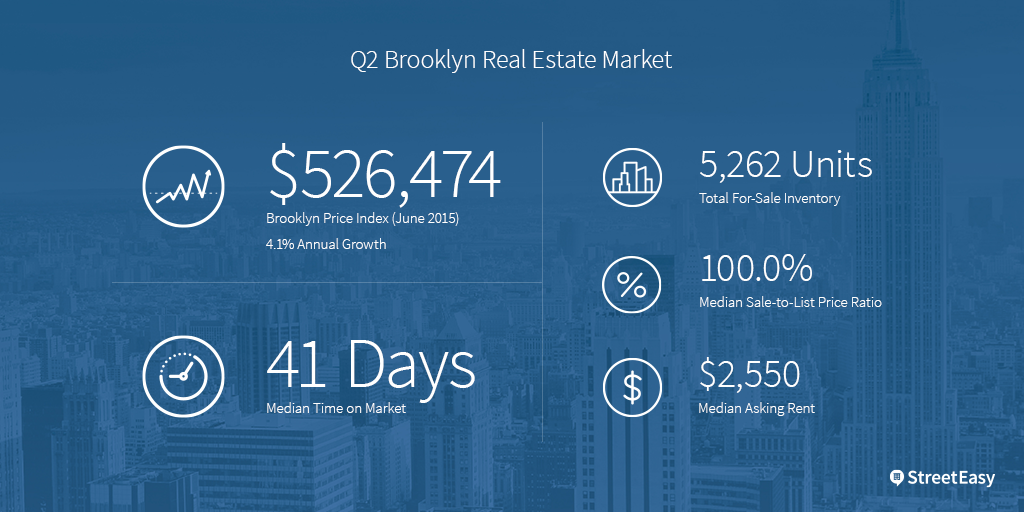 The Typical Brooklyn Seller Gets 100 Percent of Asking Price

Despite the growth in prices, Brooklyn buyers were quick to close on sales in the second quarter. The median time on market of homes that went into contract was 41 days – three days shorter than Manhattan homes during the same quarter, but six days longer than last year. Homes sold the quickest in the Prospect Park submarket (31 days), followed by North Brooklyn (35 days), Northwest Brooklyn (36 days), South Brooklyn (55 days) and East Brooklyn (58 days). The demand for higher-priced homes in Brooklyn was particularly acute in the second quarter. Homes priced in the top price tier (above $716,000) took just 36 days to sell, whereas homes priced in the bottom price tier (below $381,000) took 54 days to sell, indicating that newer or higher-quality units in Brooklyn were far more attractive to existing buyers than older and perhaps lower-quality listings.

To read highlights from the Manhattan Market Report, click here.

For additional data and graphics for both boroughs, download the full report as a PDF here.