When I woke up on that beautiful sunny morning in April a few years ago, I couldn’t help but feel overwhelmed with excitement. Because that was the day that my naïve 19-year-old self was going to find my first NYC apartment. Not an apartment that was on campus or paid for by my parents, but my very own apartment — with a roommate of course! Because, who am I kidding? It’s NYC and I was poor. 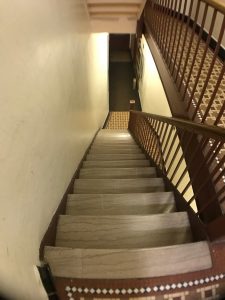 The stairs in the apartment we finally settled on.

Get Used to Stairs — Lots of ‘Em

We looked at apartments all over Manhattan (Lower East Side, Upper West Side, Financial District, East Harlem) but this day was our designated Upper East Side apartment-hunt day. My roommate and I walked out of our college residence (Fordham University at Lincoln Center), trekked over to the UES and went to the first of 12 apartments we were supposed to see that day. Although I was diligent in scheduling the showings, I apparently failed to read the full descriptions on the apartment listings, which may have explained most of these apartments were 5th-floor walk-ups. Whoops!

Had I known I was going to be walking as many stairs as the Empire State Building that day, I would have worn a Fitbit, brought a gallon of water and had my friends and family cheer me on from the sidelines.  Never let anyone tell you that you have to leave the city to go hiking, it’s just not true. Real New Yorkers hike up stairs.

The first real estate agent we were supposed to meet didn’t show up. Instead, she had us meet the super around the corner, grab the keys and see the apartment by ourselves. I felt like I was on an episode of HGTV’s “House Hunters” where the agent leaves you at the front door and says “You guys take a peek and I’ll meet you out back!” Except, there wasn’t a sprawling backyard or lake out back — there was a dumpster.

We trudged up the stairs and my heart was racing. I was breathing heavily as I pulled myself up and over that last stair, made a right and unlocked the door to the first apartment. It wasn’t amazing, but I could see a pizza shop and a laundromat from the window and that was all I needed. However, my roommate and I had 11 more apartments to see, so we were eager to get going, but felt we were off to a good start.

Fatigue Starts to Set In

We focused our search on the Upper East Side along York and 1st Avenue between 68th and 88th streets and I now feel like I know this area like the back of my hand. We walked up and down that neighborhood at least six times that day, but another flaw in my planning was not organizing the day geographically. Whoops again!

With each flight of stairs and each block that we walked, I became increasingly tired and frustrated. In the late afternoon, after viewing apartment 9 or 10, I felt my phone vibrate and saw that I was getting a phone call from my dad. He knew that my roommate and I were out and about looking for apartments and after all the physical abuse NYC had put me through that day, I couldn’t help but initially think “UGH. WHAT DOES HE NEED NOW?!” (Sorry, dad!) I answered the phone and my dad explained that he knew a guy who owned a building in the city and there was a two-bedroom that was about to go on the market.  Although I am not a fan of the “I know a guy who knows a guy” statement, the super was already on his way to meet my roommate and me, which meant we needed to hustle if we wanted to see this place. Off to 77th Street we went!

As we slowly approached the building’s stoop I was past the point of losing hope. I was over it. I didn’t want to walk up one more flight of stairs or see one more falsely advertised apartment with TONS OF LIGHT or TONS OF SPACE when in fact there was one window facing a brick wall and one closet for two people to share. Can a girl just get a walk-in closet for once?!

It Has An Elevator?!?

As I tried so hard to suppress the sass in my tone, I asked the super which floor the apartment was on. I was expecting to hear my least favorite ‘F’ word: Fifth floor. Surprisingly enough, he said it was on the second floor. THE SECOND FLOOR! HALLELUJAH! The super struggled to open the door to the building but through the glass, I could see that there was also an elevator. It was like winning the apartment lottery. I sighed with relief and immediately pressed the ‘up’ button for the elevator. The super started to say, “But the apartment is only on the second fl…” to which I cut him off and said, “I know!”

This apartment was the best one we had seen all day. Decent sized winged bedrooms, a full kitchen, laundry in the building and a bathroom that didn’t make me want to shower at the gym every day. We were ecstatic. I called my dad and thanked him for steering us in the right direction and while I was on the phone with him, the recruiter from the StreetEasy also called and offered me a job.  To me, that was a sign that the next year was going to be fabulous. I was going to live in my better-than-most apartment and start a new job all within the same week.

Although we knew we found the one, we had one more showing to attend and figured why not just check this last place out. We headed a little further Uptown to meet a very friendly agent that I was conversing with all week. We walked into a non-elevator building and when I asked what floor the apartment was on she energetically said: “Oh it’s on the sixth floor!” I could not hold back my laughter and in between snorts all I was able to say was “I’m sorry, no.”

> Landlord Credit Check: What Are They Looking For?

I am a firm believer in the idea that what is meant to be, will be. I knew I was meant to be in New York City. I didn’t know that I was meant to walk 600+ stairs to find an apartment. But eventually, I found one and ironically enough, there was an elevator in the building that I never use. New York City is a funny place that way. It was will knock you down, roll you around, be your worst enemy and be the one that breaks your heart. But, this city can also be the best friend that you’ve ever had, your muse, your soul mate, your pride and your home. When looking for an apartment in New York, just remember that as hard as it may be, there will always be a light at the end of the tunnel. If your experience is anything like mine, then that light will be at the top of the stairs.