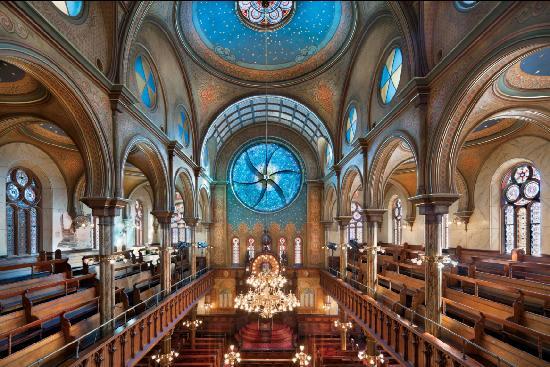 StreetEasy has partnered with Open House New York to create “NYC Uncovered,” a nine-part video series that celebrates our city’s amazing architecture and urban design.  Over the next two weeks in anticipation of the popular Open House New York Weekend (Oct. 15-16), we will be releasing the videos, each of which spotlights a single site of architectural, historic or planning significance. The videos provide a behind-the-scenes look at sites New Yorkers know and love, but otherwise might not have access to. We hope the videos enlighten, inspire and fuel your love of the complex, brilliant and ever-changing city we all call home.

Here we present the Eldridge Street Synagogue. Built in 1887, the Eldridge Street Synagogue was one of the first temples built in the United States by Ashkenazi Jews. As such, it served has major center for Jewish life and prayer on the Lower East Side.  Seamlessly blending understated beauty and historical significance, the site to this day remains an active place of worship as well as museum.

Enjoy the video and be sure to get out and explore the sites during the Open House New York Weekend!

For 129 years, the Eldridge Street Synagogue has quietly dominated a bustling block in Chinatown just off Canal Street. Between 1880 and 1924, over 2.5 million Jewish families of Ashkenazi descent immigrated from Eastern Europe to New York City, especially the Lower East Side. The Eldridge Street Synagogue was the first place of worship erected from the ground up by this community. The architects of the synagogue, however, were of German Catholic origin, which explains many of the unexpected traces of Moorish and Gothic design.

The synagogue first opened its doors on Sept. 4, 1887, just in time for the High Holidays. The synagogue quickly became a popular house of worship and an important civic and community center. In the heart of the vibrant immigrant neighborhood, the synagogue played an instrumental role, helping the community find homes, jobs and healthcare.

The 1920s and 1930s brought harder times to the synagogue and the community surrounding it. Quotas set in 1920s limited the number of immigrants entering the United States, negatively impacting the number of new worshippers at the Eldridge Street Synagogue. The financial implications of the Great Depression also hurt the synagogue, reducing its financial resources and ability to serve the community. After World War II, many members of the Lower East Side’s Jewish community left for the suburbs, again reducing the synagogue’s numbers. By the time 1950s rolled around, the synagogue’s population had severely declined and the synagogue fell into neglect.

Over the next 30 years, a small, but dedicated congregation remained active at the synagogue. It wasn’t until the 1980s, however, that the synagogue began to experience revitalization. In 1986, Roberta Brandes Gratz formed the non-sectarian group The Eldridge Street Project to restore the synagogue to its former grandeur. Twenty years and $20 million later, the space reopened to the public as the Museum at Eldridge Street.

In 2010, the artist Kiki Smith and the architect Deborah Gans designed a stained glass window to replace the original that had been destroyed decades earlier. It stands as an inspiring symbol of both the synagogue’s historic roots and its forward-looking vision. Today the site is still an active place of worship as well as museum offering cultural and educational programs that explore and celebrate the heritage of Jewish peoples, American immigrants and New York City.