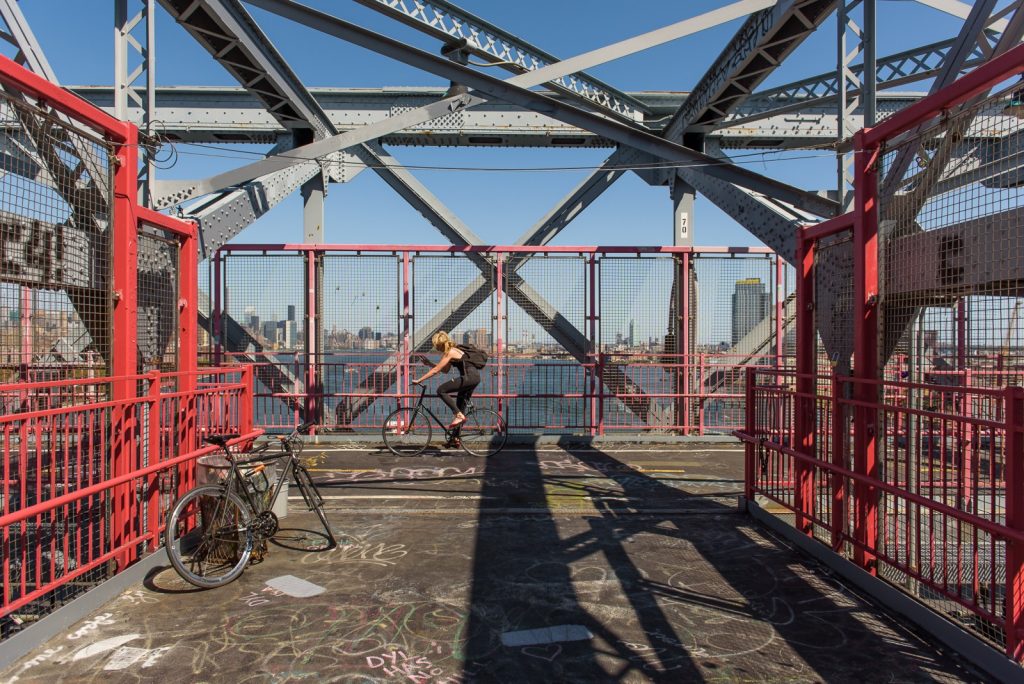 Williamsburg Bridge is the most highly trafficked bridge in the city for bike commuters.

While naysayers still complain that New York City is far from being a bike-friendly town, over the past 25 years the city has made major strides in improving safety and conditions for cyclists.

Are we living in America’s Amsterdam? Far from it, but there have been dramatic changes in the city’s bike ridership and infrastructure since the mid-1990s when the DOT launched a concerted bike program. In the last six years alone, the city has built over 300 miles of bikes lanes, 40 of those miles being in protected lanes.

As it stands today, the city has 1,000 miles of bike lanes. Brooklyn leads the charge with 311 miles of bike lanes in its network of streets; next up is Manhattan with 241, then Queens with 208 and the Bronx with 178. Despite being the biggest borough geographically, Staten Island has the fewest miles of bikes lanes with a mere 75. They’ve got all those driveways out there for a reason, one supposes. 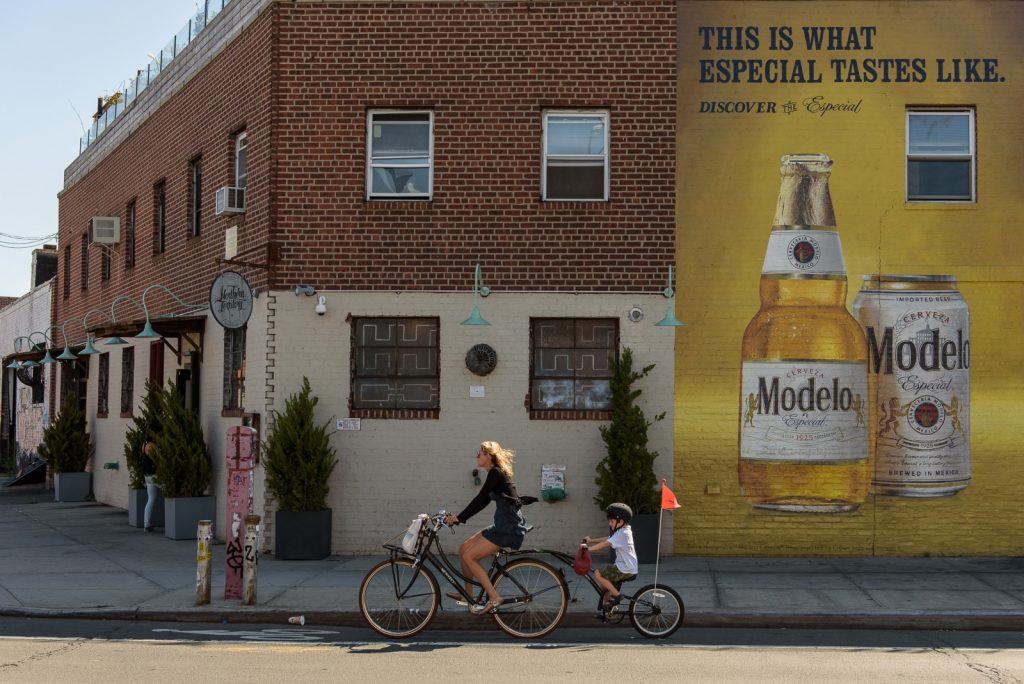 The bike lane along Kent Avenue

City-based groups and initiatives like the DOT, Transportation Alternatives and Bloomberg’s PlanNYC all have worked hard over the past 20 years to build bike lanes, promote bike advocacy and awareness and make the streets safer for cyclists. As a result, bike ridership has boomed. There was a 68 percent increase in daily bike commuters between 2010 and 2014, a rate of growth twice as fast as other major bike-friendly places like San Francisco, Seattle and Portland.

The increases in ridership are also due to other factors like the high rents pushing New Yorkers to farther-flung neighborhoods where public transportation options are more limited and less reliable.

Brooklyn, that outer borough bastion of fixies and overpriced bike gear, again led the pack with a 75 percent increase in daily bike commuters. No surprise for anyone who’s witnessed the flow of bikers down Kent Avenue in the mornings — the Williamsburg Bridge proves to be the bridge of choice for bike commuters, averaging almost 5,000 rides a day, shortly followed by the Manhattan Bridge, which gets about 4,500 rides.

Miles of bike lanes and number of commuters, however, do not necessarily translate to bike-friendliness. There are a slew of other factors to consider when assessing an area’s safety and conduciveness to the biking lifestyle, including access to public parks, lack of commercial traffic, amount of quiet, wide streets and number of Citi Bike docks among others.

Below, we highlight some of the city’s best neighborhoods for cyclists. Brooklyn clearly dominates in terms of number of bike lanes and number of avid cyclists, but we’ve got your Manhattan neighborhoods covered, too. Please let us know if we’re missing one of your favorites!

Williamsburg is a mecca for bike riders. It’s got tons of cyclists of all stripes, on fixies, on beaters, on classic commuting bikes. Some in helmets, some sporting dreads, some rolling cigarettes, some porting toddlers. With such a diverse community of bikers, Williamsburg is a really fun place to ride a bike and a great place to live if biking is a big part of your lifestyle. The neighborhood has access to some great bike lanes, including the protected path along Kent Avenue, as well as smaller, but well-used bike lanes along pretty much all of the area’s major avenues including Wythe, Berry and Driggs. As you head further east into the neighborhood, Grand Avenue provides a bike lane that leads directly to the bridge and into the heart of Williamsburg.

Citi Bike docks and bike shops abound in Williamsburg. Top picks for local bike shop goes to Landmark Bicycle, which has a great location on Bedford and South 4th just feet from the Williamsburg Bridge. 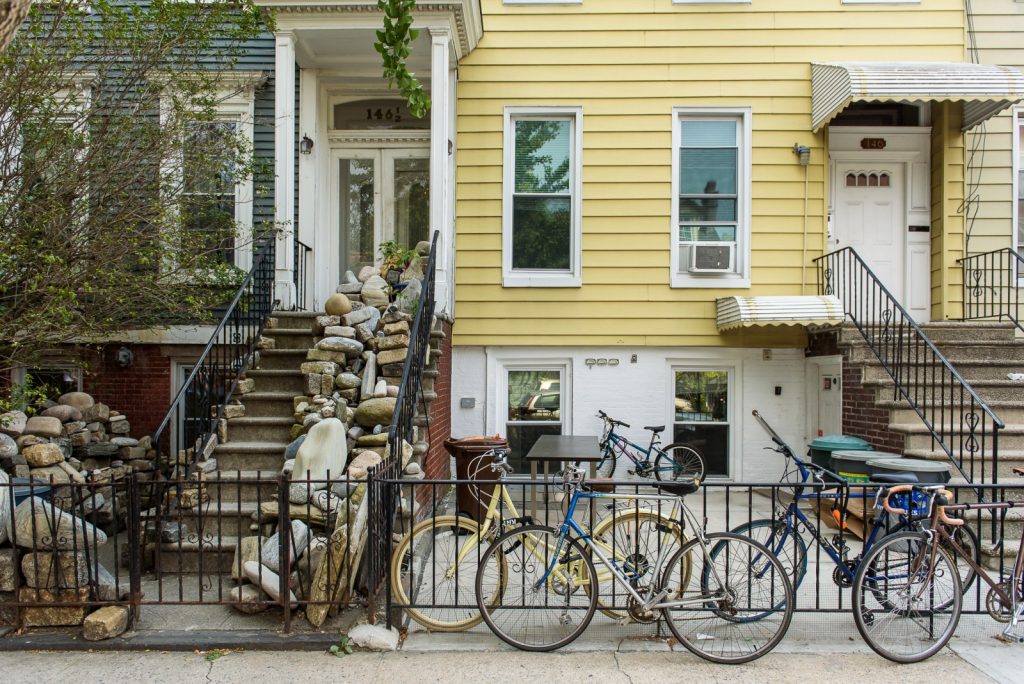 Everyone’s got a bike in Greenpoint

If you’re living in Greenpoint, you need to have a bike. Given its lack of subway access, it will help you get around without blowing the entirety of your paycheck on Uber. Plus, if you want to fit in here, a bike’s a great conversation starter. It’s like having a dog in Park Slope. No better way to make a new friend than complimenting someone’s sweet Biria.

Also, Greenpoint is a bike-friendly place because it’s got great stretches of bike lanes along Kent Avenue and Franklin Streets as well as some lovely, low traffic side streets that are perfect places to cruise on warm afternoons.

For local, helpful bike shops you can do no better than B’s Bikes on Driggs and Eckford, a friendly, no-frills place where you can’t get your bike fixed without getting bamboozled into buying a ton of bike gear you don’t need. 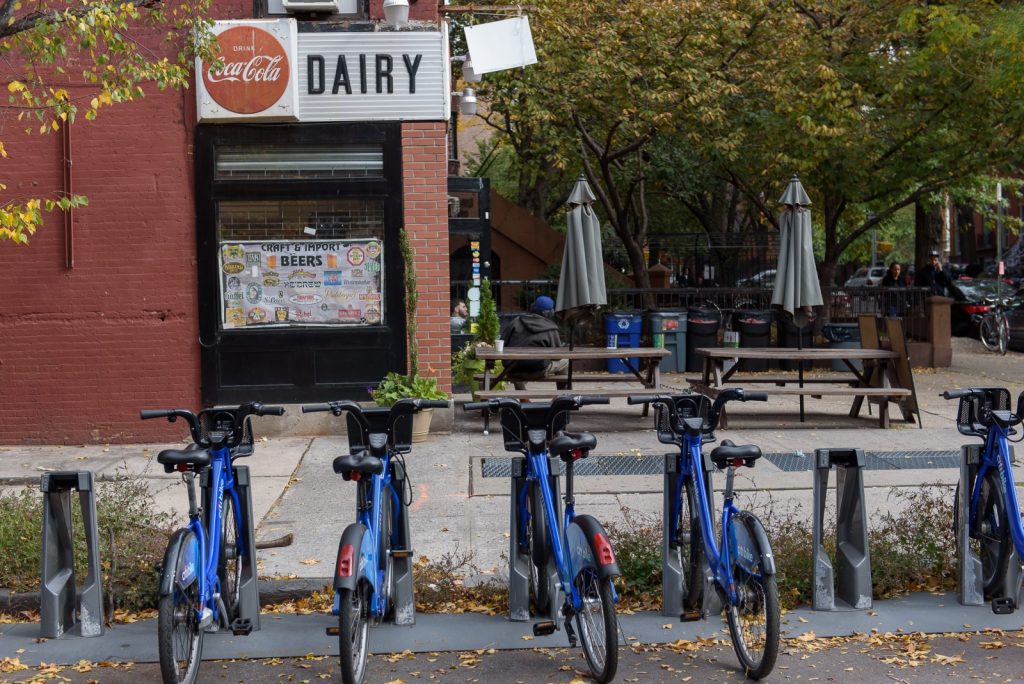 One of the many Citi Bike docks in Fort Greene

If you needed another reason to move to this lovely Brownstone Brooklyn neighborhood, you’ll be happy know Fort Greene also happens to be great for bikers. Given its proximity to the Manhattan Bridge and the indispensable bike lane along Flushing Avenue that leads up to it, Fort Greene is incredibly convenient for bike commuters looking for easy access to Downtown Manhattan. Fort Greene also has a robust network of really nice, well maintained bike lanes on many of its major avenues including Vanderbilt, Lafayette and DeKalb among others. The neighborhood’s side streets are very wide, flat and in general, very picturesque – all of which makes for ideal biking conditions.

The neighborhood also offers a high density of Citi Bike docks for riders who prefer the bike share program to riding their own bike. Red Lantern, the neighborhood’s go-to bike shop, serves good beer and coffee, the perfect antidote to a flat and the perfect pit stop on your way home. 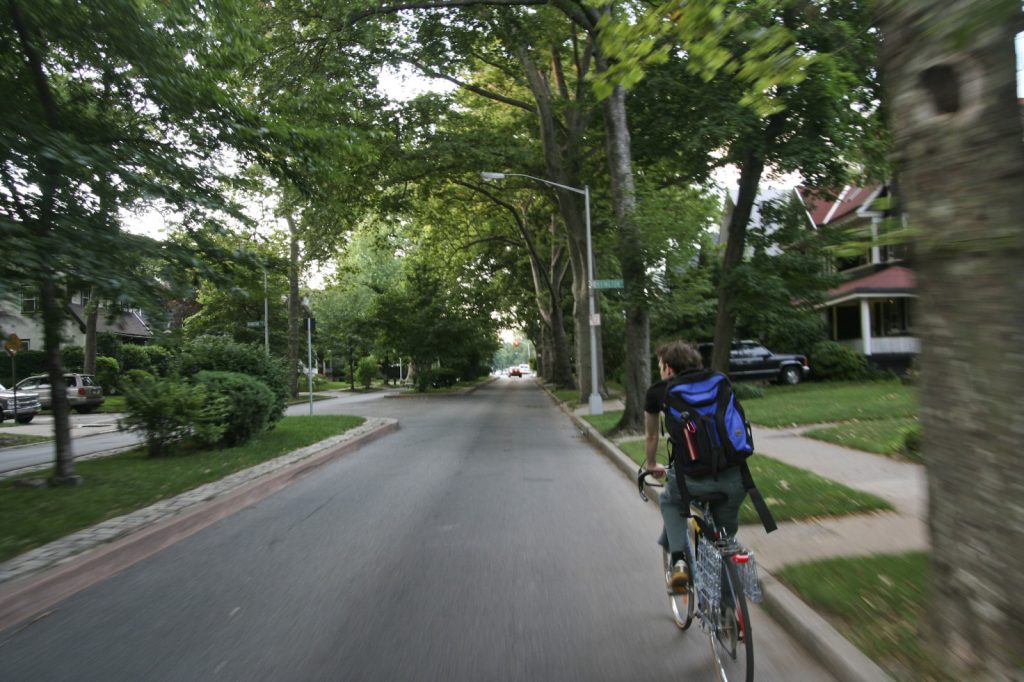 Ditmas Park and Kensington are the closest things Brooklyn’s got to a suburb and as such these two small, neighboring areas are great for biking around. Think quiet, low-trafficked side streets, wide avenues with planted medians and lots of kids peddling by. The neighborhoods are best suited for leisure cyclists as opposed to bike commuters since both Kensington and Ditmas Park are far from Manhattan and Citi Bike has yet to expand here. If you are a leisure cyclist though, Ditmas and Kensington are lovely neighborhoods both offering easy access to Prospect Park and the Ocean Parkway Greenway, which offers a protected bike lane all the way down to Coney Island. 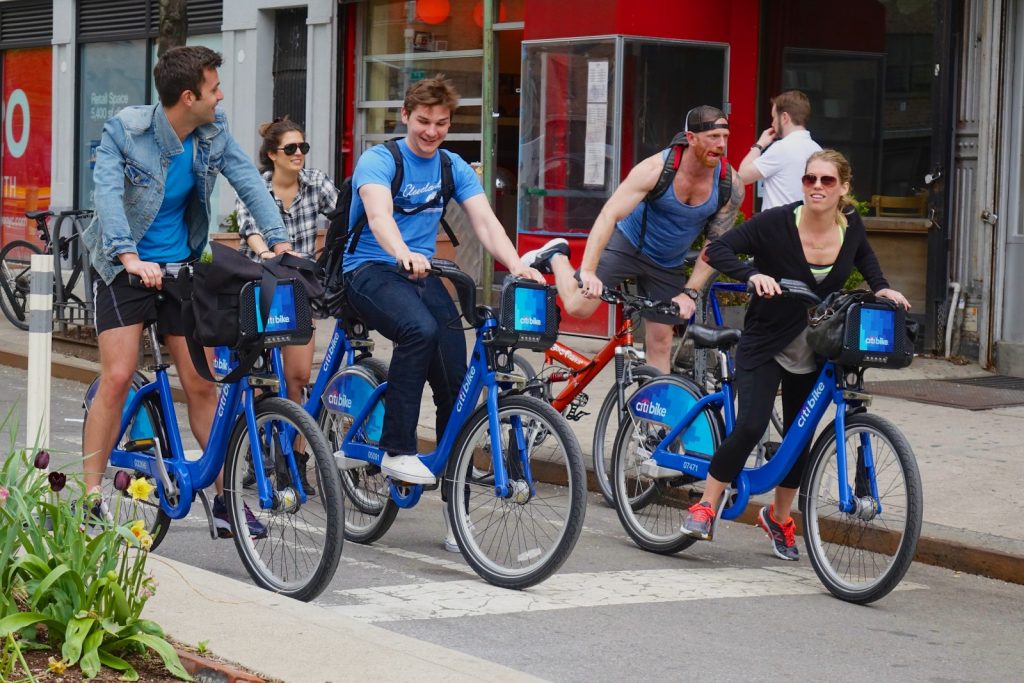 The avenues in Chelsea can be hectic, but the area has been greatly improved for cyclists in recent years thanks to the aforementioned DOT initiatives. Both 8th and 9th Avenues have fantastic protected bike lanes that speed commuters safely uptown and downtown. As you move further west, the side streets get wider and slightly quieter. Head all the way west and Chelsea offers easy access to the Hudson River Greenway, which is easily Manhattan’s best maintained and most scenic bike lanes and runs all along the West side of the island from the Battery to Washington Heights. Chelsea is also chock-o-block with Citi Bike docks. There’s practically one on every other corner on 8th Avenue. 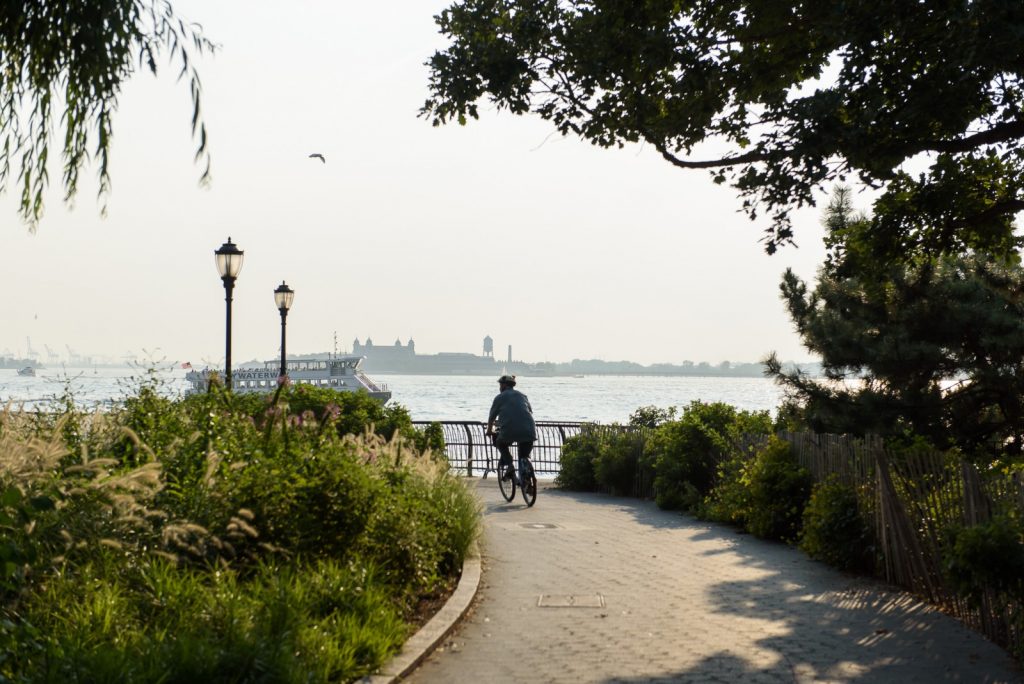 Biking along the Greenway in Battery Park City

Sure, Battery Park City is in the heart of Downtown Manhattan and just a stone’s throw from the Financial District’s warren of narrow, curving cobblestone streets, but it’s one of the borough’s best bets for bikers. Given its tucked-away location, the neighborhood’s streets are relatively quiet, especially on weekends and at the end of the day. And smack-dab in the middle of the Hudson River Greenway and the protected bike lane running along side the West Side Highway, you couldn’t ask for better access to leisure riding routes and commuter-friendly streets. Battery Park City is also great if you’re attempting to teach a toddler how to ride. It’s got tons of families, so you’ll be in good company. It’s also got a manageable network of park space, bike lanes, dead ends and cul-de-sacs — all of which are ideal for practicing on training wheels. Despite its tiny footprint, the neighborhood boasts six Citi Bike docks guaranteeing you won’t have to walk more than a block and half without finding one. 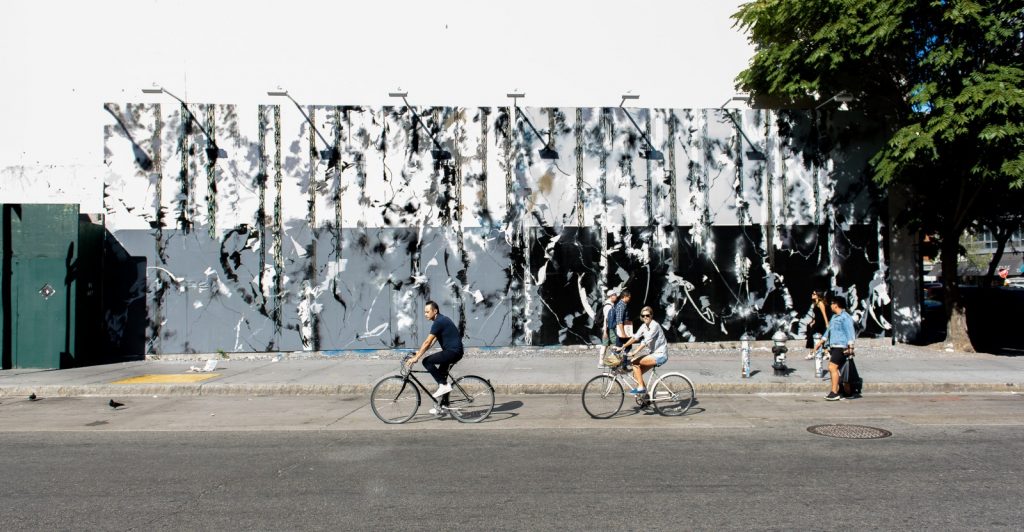 Alphabet City, or the very East, East Village is a great neighborhood all around, mixing a local, quiet vibe with cool, off-the-beaten path bars and restaurants and some of the city’s most peaceful and little known pocket parks. The major drawback is its distance from public transportation. For bikers in the neighborhood, this is no object. It’s not just necessity that makes Alphabet City a great neighborhood for bikers, though; it also offers direct access to the game-changing protected bike paths along 1st and 2nd Avenues – which are some of the city’s longest and most trafficked bike routes. As you move further east, the side streets get wider and quieter and are really fun to bike around on a warm summer nights. Tons of other young people on bikes will be out, cruising around from one local bar to the next. As you go east, you’ll still find tons of Citi Bike docks — especially along Avenues C and D. And on Avenue B, you’ll find CC’s Cyclery, a local bike shop specializing in single-speed bikes. They know their audience!