Bruce Willis was always an Upper West Side kind of guy. In 1987, when he was married to Demi Moore, the couple purchased a massive, two-story tower unit in the famous San Remo building at 145 Central Park West. 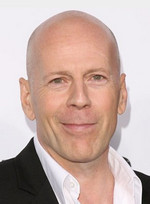 Moore still owns the place, complete with 7,000 square feet of space and 360-degree views of Central Park and all of Manhattan, though she was reportedly seeking a quiet sale in the spring of 2014. The price that Moore was reportedly asking? Seventy-five million, complete with an additional ground-floor apartment Moore also owns.

After his split with Demi, it was no surprise when Willis went shopping for his own New York abode. The “Die Hard” star and his new wife, Emma Hemming, spent $8.9 million in 2013 for a 3-bedroom unit at 300 Central Park West, or the El Dorado building. The couple quickly set about remodeling the apartment they bought from U2 bassist Adam Clayton: knocking down a wall, adding a steam room and radiant heat floors and a stunning new kitchen.

However, with a second child born to Willis and Hemming in 2014, the 3-bedroom, 3.5-bathroom apartment in Manhattan turned out to be child’s play.

In search of more room to roam, Willis and Hemming sold the unit for a shade under $13 million, just months after they bought a 5-bedroom estate and an adjoining parcel in Bedford, NY, about an hour north of the city.

But, of course, that was hardly the final episode of the Bruce Willis Takes Manhattan Tour of Real Estate Buying on the Upper West. In the dawning days of February 2015, news broke that Willis was under contract to buy a $16.99 million duplex at 271 Central Park West. The decor was similarly as urbane and sophisticated as the one he sold at the El Dorado, but the new pad spans 6,000 square feet with 80 feet of frontage overlooking Central Park. According to the Wall Street Journal, the massive two-floor apartment was converted from two units by previous owner Wesley Edens, co-owner of the NBA’s Milwaukee Bucks.

Willis’ real estate deals in New York capped a spate of selling and buying that signals his’ return to the East Coast from Los Angeles and Idaho. Willis sold his Beverly Hills estate for $16.5 million this past August. His Hailey, ID property is still on the market for $7 million, down from the original list price of $15 million back in 2011.

But for a man with long ties to the Upper West Side, and some of its most iconic buildings, it’s tough to imagine that Willis won’t bite again into that preferred slice of the Big Apple.