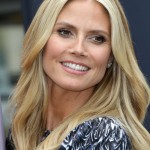 The designers of the modern luxury townhouse at 400 West Street can’t be happy that their slick and tricked-out West Village property has not found a buyer after being on the market since 2009, but Heidi Klum? The supermodel and “Project Runway” host is back ‘IN’ the 7,180-square-foot home as a renter once again.

According to the New York Post, Klum will be taking over the 5-bedroom, 4.5-bath, 22.75-foot-wide property that has been listed both as a rental for $70,000 a month and for sale for $17.95 million. That’s way down from the top list price of $25 million that designers Bob and Cortney Novogratz initially sought when they first listed the townhouse.

Klum is no stranger to the property, having rented it previously. And with a passel of kids, Klum & clan will no doubt make good use of all the amenities and fun stuff, including an indoor basketball court and screening room. There’s also a rooftop terrace overlooking the Hudson; teak wood hot tub; outdoor TV; wood-burning fireplace, and an outdoor kitchen covered by an electric awning.

Like a lot of our celebrity “friends,” Klum has generously provided an entertaining series of high-end real estate deals over the years. The 42-year-old mom and model created a masterpiece in the Los Angeles neighborhood of Brentwood, which had its own website. The Heidi Klum Estate, which she sold last year for just one million under her $25 million list price.