Roosevelt Island: 'A Small Town from the Twilight Zone'

Roosevelt Island got a lot of attention last spring when Hillary Clinton launched her presidential campaign from the Four Freedoms Park on the island’s southern tip. Although it comes as no surprise that the content and tone of her speech drew a lot of commentary from the left and right, it is slightly more unusual that the location of the speech itself received so much scrutiny.

Well, perhaps it’s not so unusual because there’s no getting around it – Roosevelt Island is an unusual place.

It’s isolated, but centrally located. Its history is deep, but walk around the island and it seems like it was plopped down from nowhere in the 1970s. The streets are homogeneous, the lawns manicured, but the people are demographically and ethnically diverse.

It’s a four-minute tram ride from the crowds of Midtown and the constant stream of traffic along 2nd Avenue to Roosevelt Island where there are only 10,000 residents and just one road.

Ursula Lakan, a 26-year old filmmaker who grew up there says, “It’s a strange small town from the Twilight Zone.” 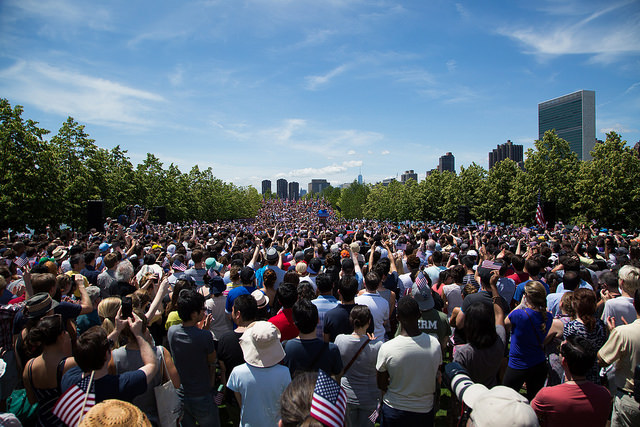 Lakan, like many residents, was not overly enthused by Hillary deigning the island with her presence. “I was like, ‘what is she doing on Roosevelt Island?’ I got excited for a minute, but then didn’t care.”

Despite her short-lived excitement, public reaction to the location of Hillary’s campaign announcement has drawn light to the incongruity of the place.

Critics of the location claimed that hosting a campaign rally on Roosevelt Island would be a logistic nightmare given the size of the island (just 800 feet wide and two miles long), its location (in the middle of the East River), and it’s relative isolation (accessible only via tram, the F train or a single road bridge from Queens). On top of that there is no public parking on the island or traffic lights.

So, point taken — Roosevelt Island is obviously not the easiest or most convenient spot for a major public event. 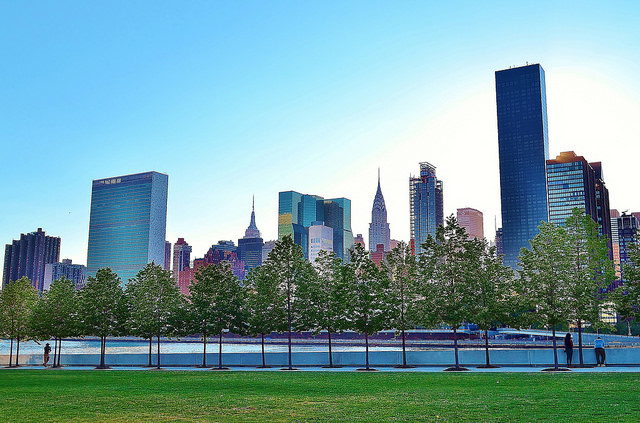 Proponents of the location’s choice cited the obvious, however, such as the island’s namesake, the recently completed Four Freedoms Park (dedicated to FDR), and the backdrop overlooking the United Nations. Take all these into account and the political implications are clear. With Midtown just to the west and Astoria just to the east, the island also stands as a steppingstone between the financial capital Manhattan represents and the deep-rooted, diverse middle class Queens represents and it makes perfect sense.

Recently, Roosevelt Island itself has come to embody those opposing strains. Intrinsically, the island is a solidly middle class place and highly diverse.

Although Roosevelt Island is technically in Manhattan, its real estate prices, as Lakan noted, are not nearly as expensive. In 2014, the median recorded sales price in 2014 was $800K, which is 16 percent below the Manhattan median of $942K. 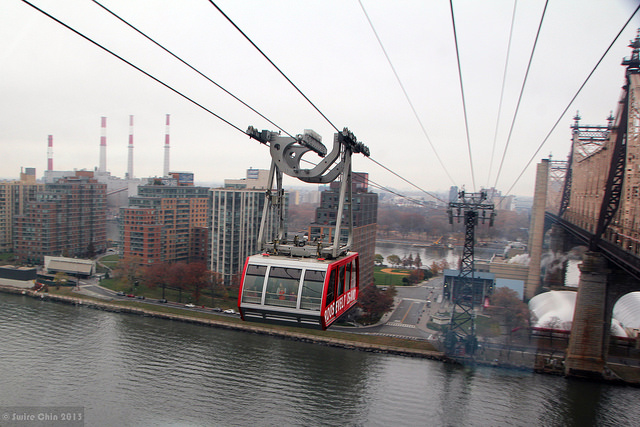 In large part the diversity of the island is due to the many UN employees who hail from all over the world and live on the island. The tram is often filled with residents chattering into their cellphones in languages from French African dialects to Hindi and Chinese.

“It’s a word of mouth thing,” says Lakan, whose family had been living in Geneva until they were relocated to the UN headquarters when she was a small child. “A lot of UN families come here because others have come before them.”

Like others, Lakan’s family “was freaked out about the size of the city.” The more manageable size of Roosevelt Island made it a more comfortable, she says.

“Roosevelt Island isn’t for everyone and it can be a challenge to get people to consider living here,” says Suzanne Wolf, a broker with Corcoran who has lived on the island for over 20 years. “But others really enjoy it. For some people living here, the rewards of living here outweigh the inconveniences.”

Not for everyone, but good for families

Wolf found it an ideal place to raise her son and took advantage of the many small, community-based services that were offered on the island. “It’s such an unusual environment to grow up in but it breeds close bonds.” Wolf adds. 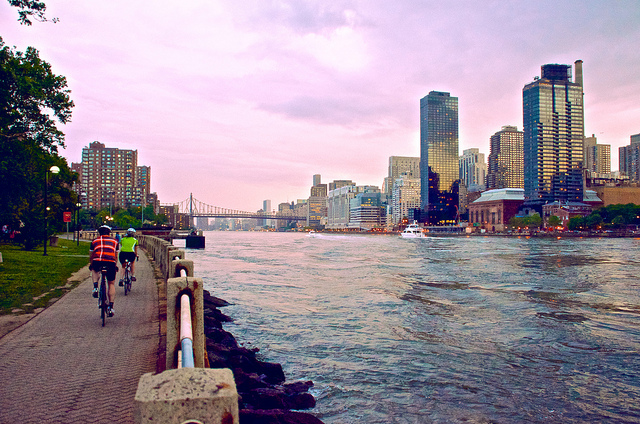 For Lakan, “… it used to be un-thought of to walk by and not say hi to your neighbors.” She finds now that’s not the case, though, “It’s sorta more awkward.” Although Lakan has noticed a change in the intimacy of the community, she admits it was a cool place to grow up in. “There were tons of activities for kids,” remembers Lakan, “There’s a lot of communal spaces that we all used to play in.”

She compares the design and feel of the place to Stuy-Town and in many ways the comparison is dead-on. Homogeneous, brick high-rises are clustered together around well-maintained lawns and playgrounds. And like Stuy-Town, the place gives off a decidedly socialist vibe. The sparse commercial options heighten the Cold War look and feel. “One challenge is attracting shop owners because of the limited size of the population,” says Wolf. The island has just one of all the basics – one pharmacy, one grocery store, one Chinese takeout place, and one liquor store. 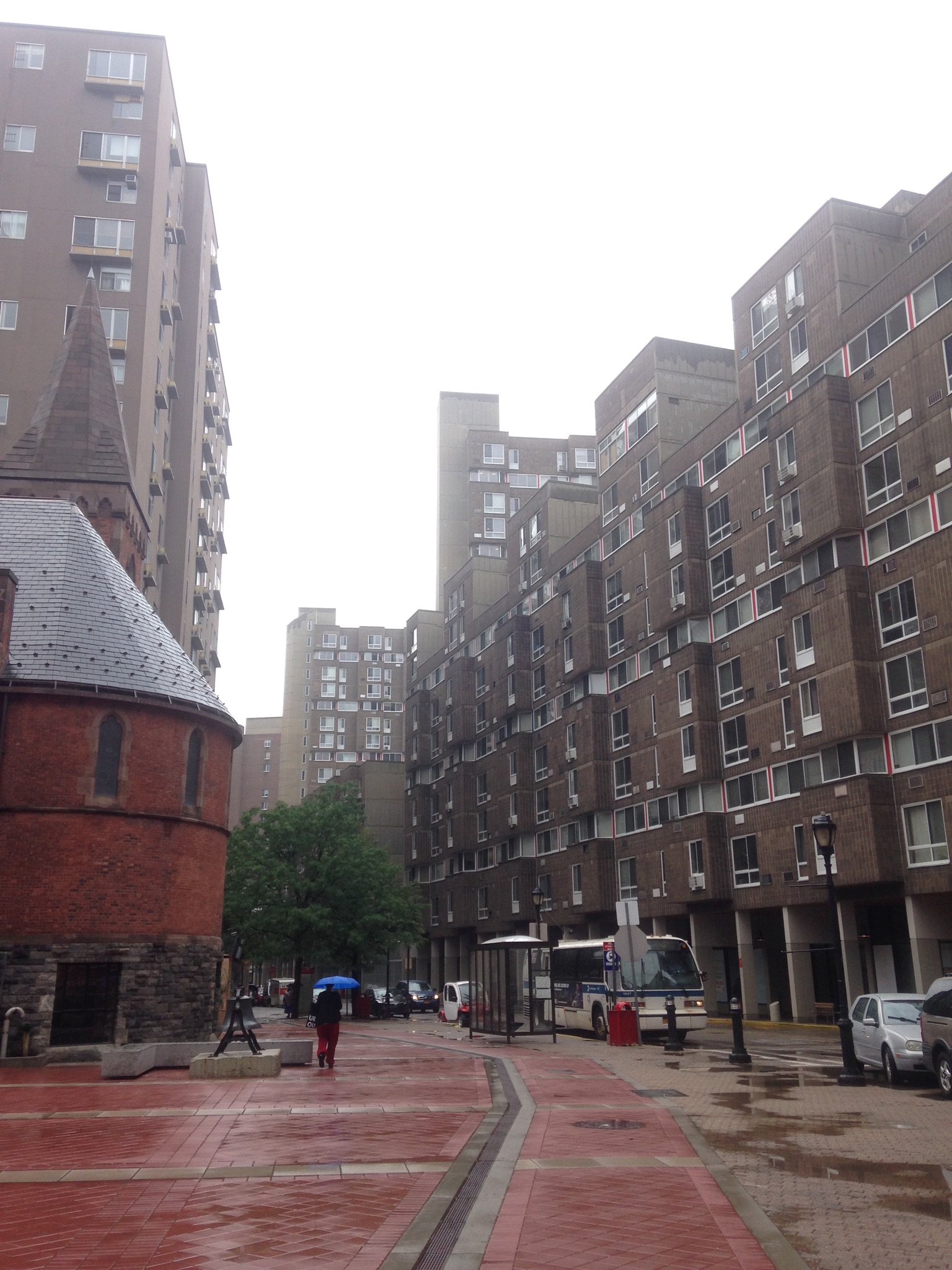 From mental hospitals and Utopian ideals to luxe rentals

As it turns out, some of those left-leaning ideas were at play when Roosevelt Island was developed for residential living.

“In the 70s, it was planned to be this Utopia-type place with a diverse socio-economic community,” says Lakan.

More specifically, the island’s development derived from the principles and programs of LBJ’s Great Society, including the urban new communities movement. In 1969, the development of a new community there was officially authorized when New York City leased the island to the state of New York’s Urban Development Corporation for 99 years.

Prior to that the city had owned the island and used it principally for hospitals. Throughout the 19th century, the island housed so many hospitals, penitentiaries and social service agencies that it came to be known as “Welfare Island.”

Those vestiges remain today. There are still two hospitals on the northern tip of the island and the former New York City Lunatic Asylum was actually recently converted into upscale rentals. Now known as the Octagon, the building offers 500 rental units, six of which are currently available, including a no-fee studio listed for $2,375/month. 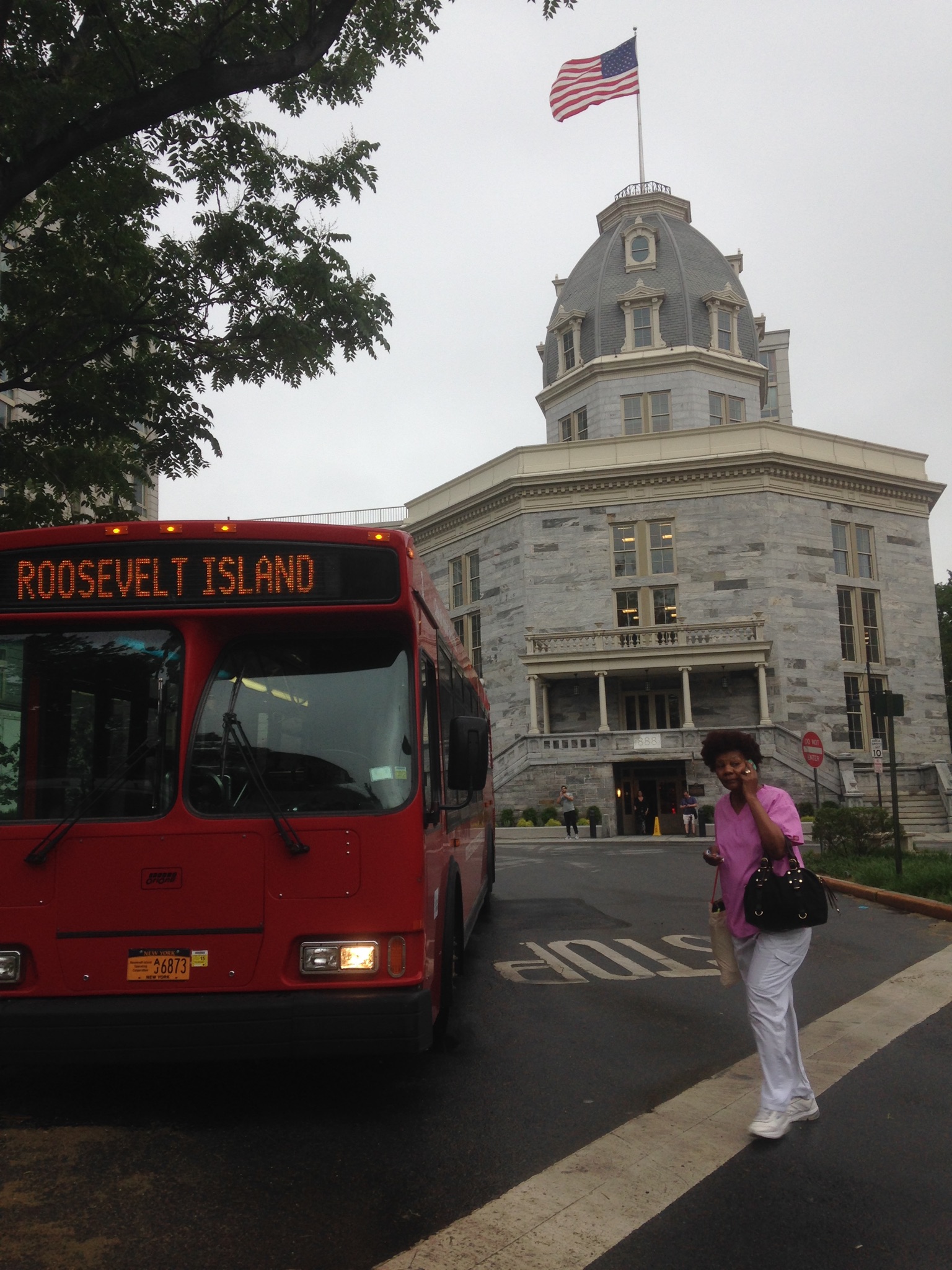 The Octagon once was home to the New York City Lunatic Asylum, but has recently been converted to rentals. (Source: StreetEasy)

On the southern tip of the island, the ruins of the Smallpox Hospital, built in 1856, remain. You might recognize the site from Spider Man or from countless hours stuck in traffic on the FDR. Either way, it’s a beautiful, degrading structure that remains closed to the public, though Lakan notes “kids sneak in all the time.” 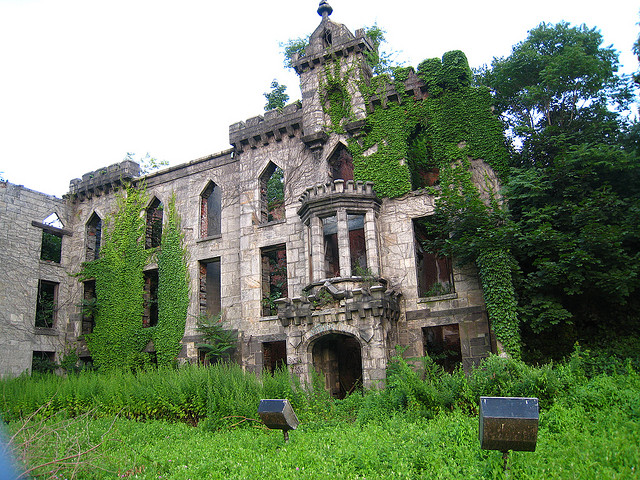 More recently, the island has come to be associated with the future of the city’s economic industry as the building of Cornell’s Tech Campus gets underway this month. A recent stroll around the island reveals a whole lot of construction both on the southern tip of the island for the tech campus and on the east side of the island where Riverwalk Crossing is expanding with three new buildings and 266 new rental units.

“For 30 years there was only one building that you could own in on Roosevelt Island,” says Wolf, referring to Rivercross,  a 365-unit Mitchell-Lama co-op located at 531 Main Street. “Other than that, it was all rentals.” 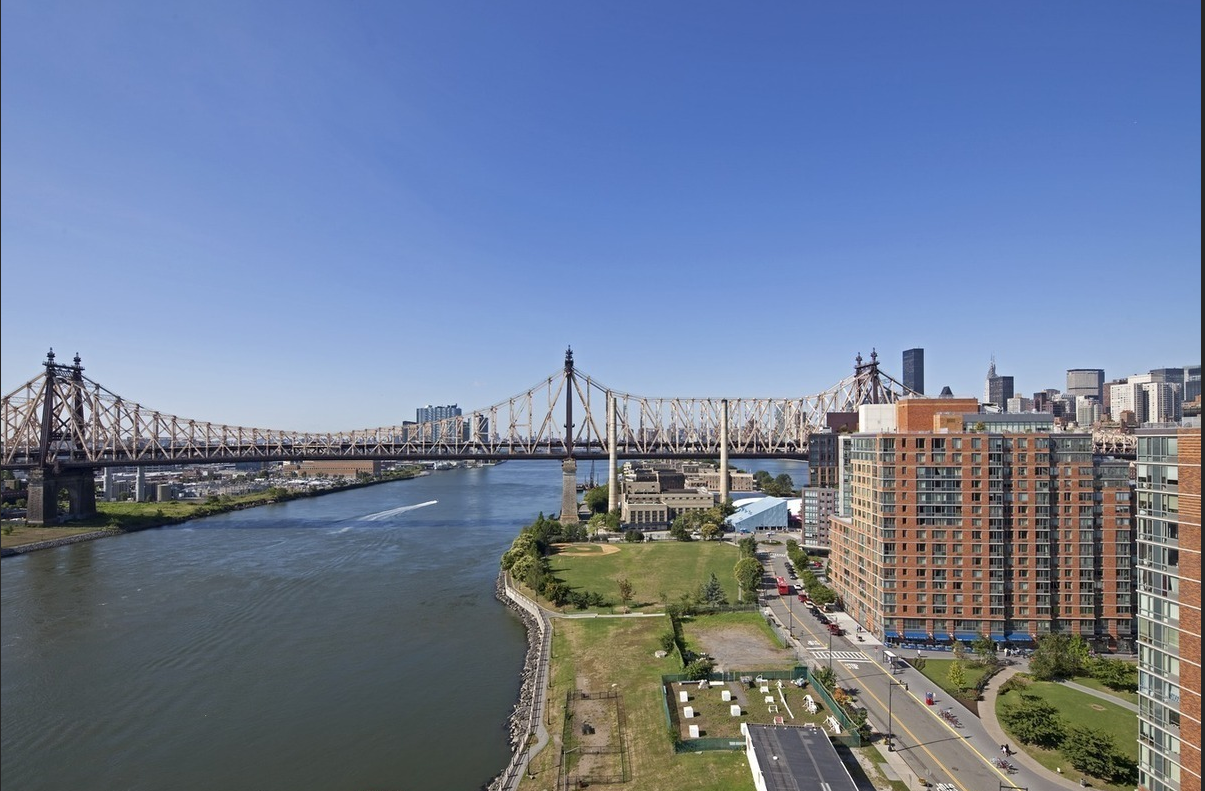 That changed in 2006 when River Walk Place, the first series of condominium complexes developed by the Related Company, hit the market. Although the new buildings are a definite departure from the island’s look and feel, residents have embraced them.

“The majority of the first wave of buyers [at River Walk Place] were already residents of the island,” says Wolf.

Lakan, whose mother recently traded in the apartment they’d be renting for years for one of the new condos, shares the sentiment. “Sure, it’s all new construction, but it’s not a bad gentrification situation. People aren’t getting priced out.”

There goes the neighborhood?

When you look at the real estate numbers, Lakan’s observation proves true — housing prices have not skyrocketed on Roosevelt Island despite of the changing housing fabric. In 2007, the median closing price for Roosevelt Island was $731K. In 2014, it was an $800K, up just 9 percent over 10 years. 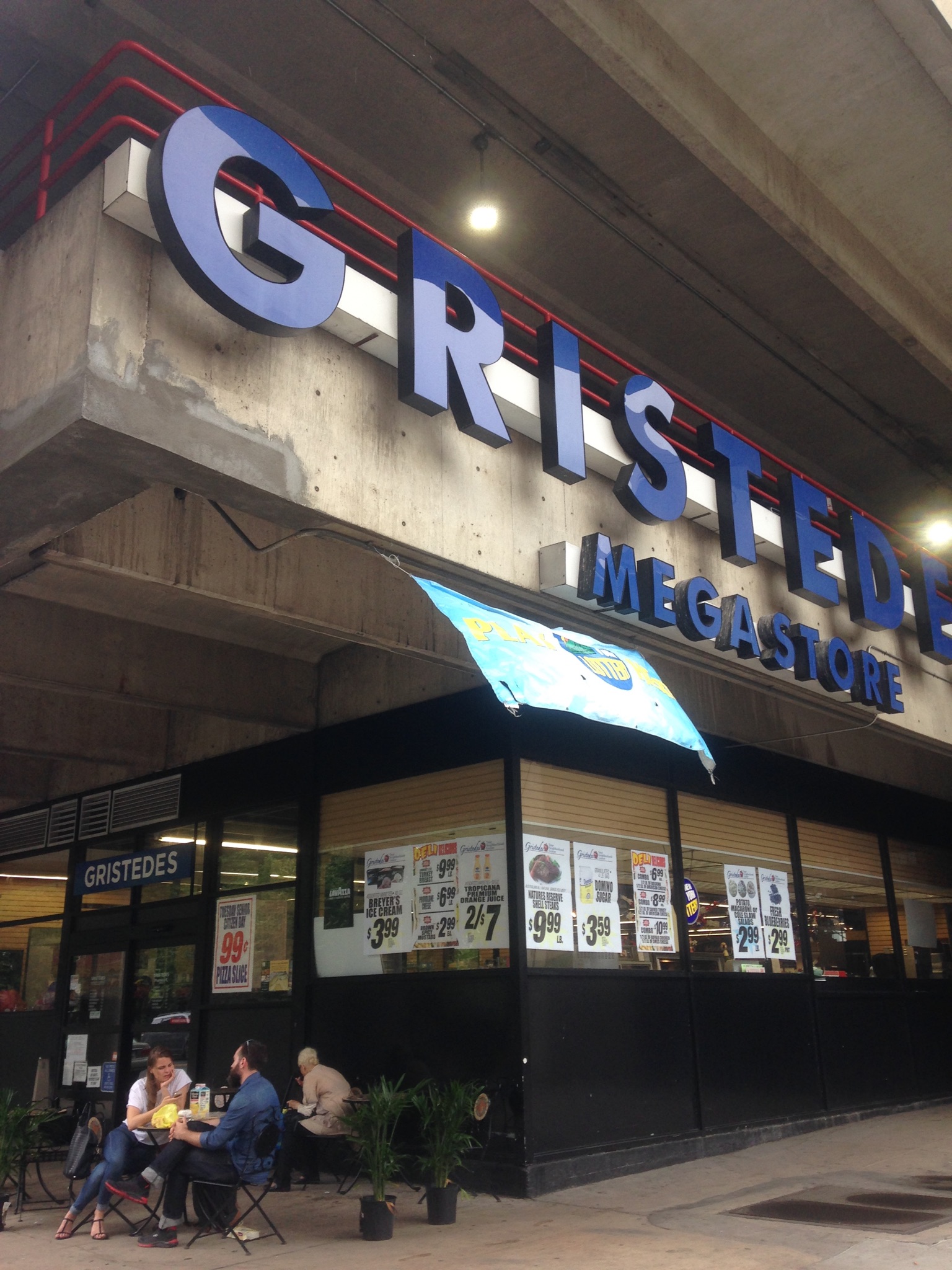 The new condos on the island offer all the bells and whistles of classic Manhattan luxury buildings, but Lakan is not worried about a wave of newcomers flooding in and shaking up the ecosystem of the island.

“Roosevelt Island will never appeal to the post-college, young professional crowd, which is good because it won’t be ruined by them.”

The inherent peculiarities – its isolation, lack of amenities, and decidedly un-New York pace of life – will always be a limiting factor.

“It’s never going to be in style,” says Lakan. “Roosevelt Island is not the cool of artisanal cheese cool — it never will be, but the kind of cool that is diverse and unique and different. That it is.” 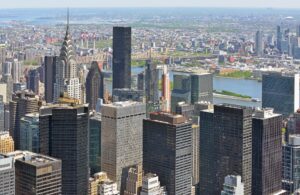