Greenwood – a neighborhood just southwest of Prospect Park – is not the first stop on the housing tour for buyers looking for a quintessential Brooklyn brownstone. Nor is it the first stop for buyers looking for exposed beams and an open floor plan of a converted industrial space. But this two-bedroom located at 285 20th Street and listed for sale for $2,250,000 could appeal to both. And with its two-car garage, it could even appeal to someone considering relocating to Long Island. 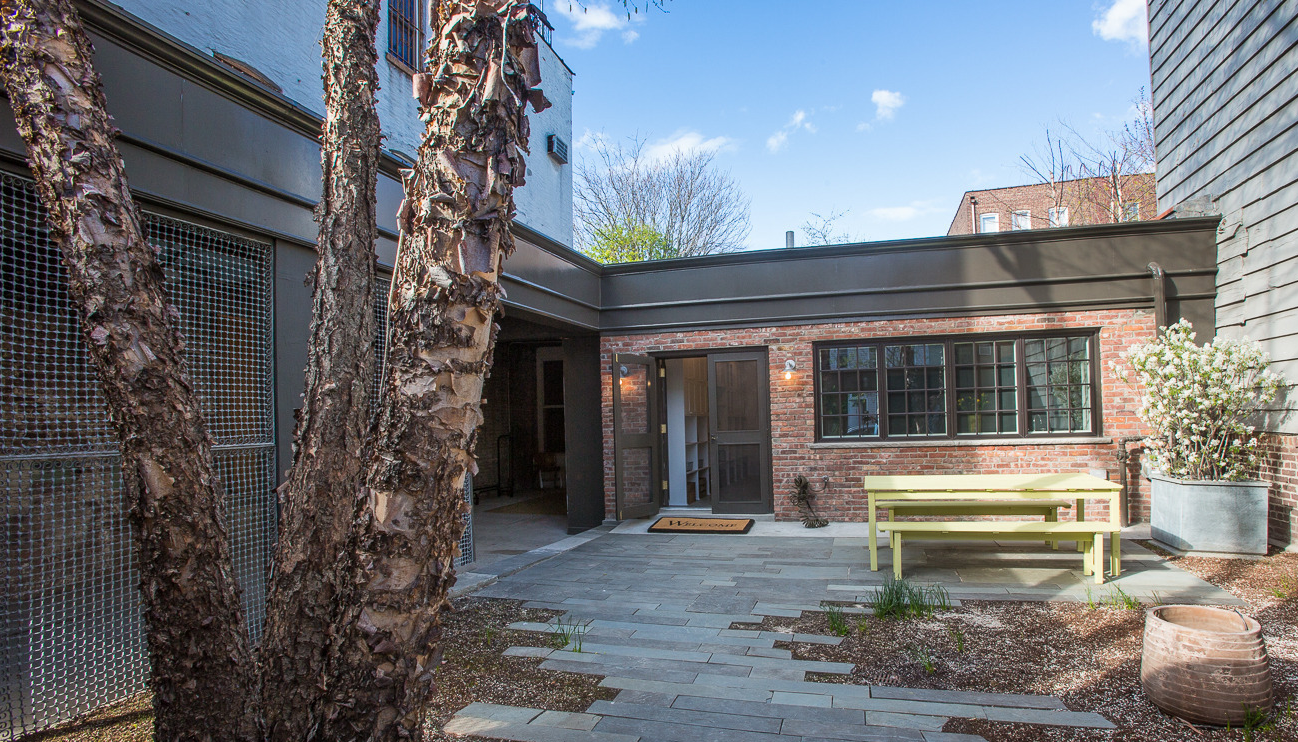 Although the features, location and layout of the home lend themselves to a wide variety of buyers, one thing is for certain, whoever lands the place must want a property with distinct character. Set on an unusual 360×100 lot, the property offers a deep, large layout. Its 2,280-square feet of living space extends across just a single floor. From the front, the building looks unassuming and is dominated by a garage door that serves as one point of entry. Next to it is a small door that offers another entry that lets out onto an enclosed court yard that leads up to another door to the interior of the home. 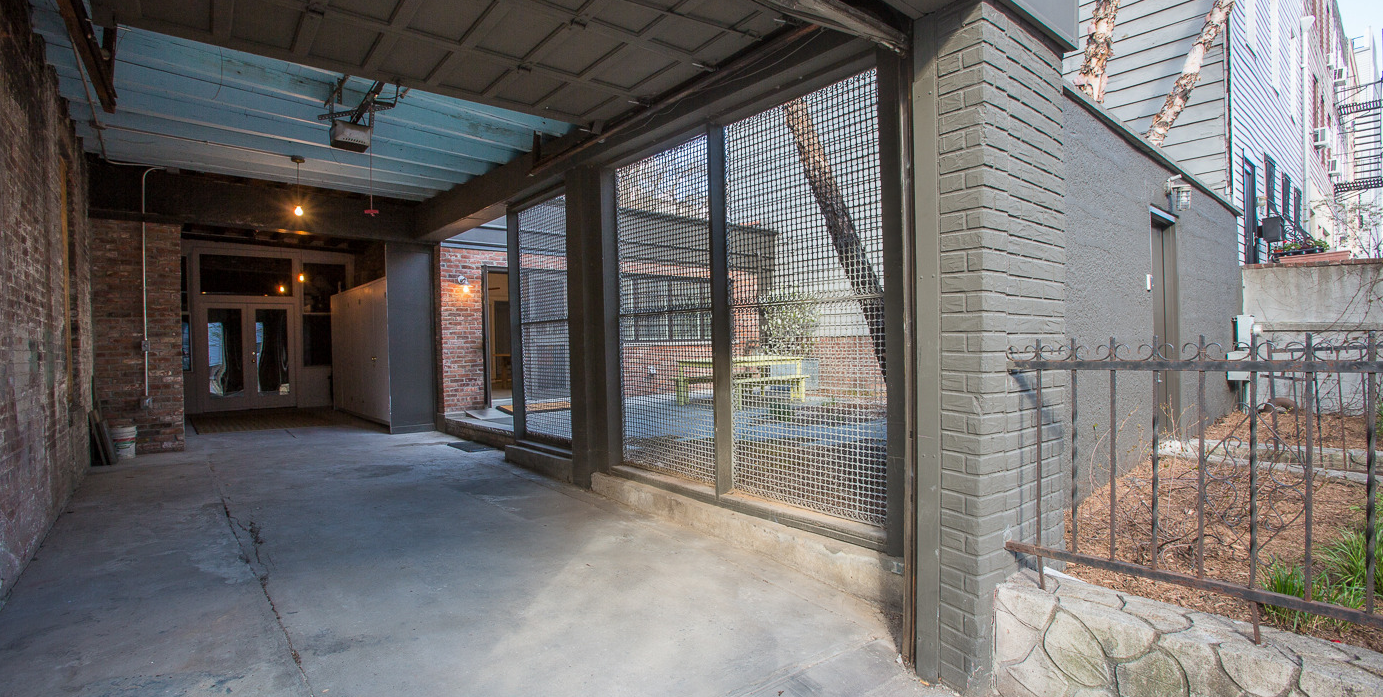 You can either enter through the garage door or the small door to the side. Note the enclosed garden just beyond the door in the wall!

The property was originally built as a commercial bakery in the 1970s when Greenwood was predominantly an industrial area offering proximity to Gowanus and 4th Avenue. Over the past 15 years, the area has been rezoned and a major effort to preserve and popularize Green-Wood Cemetery has been undertaken, together making it more of a destination for families. Despite the changes going on in the area, vestiges of this property’s industrial past are still evident. The fire doors that lead from the garage into the main living space were once probably used as a loading dock for delivery trucks, says Paul Paglia, a broker with Garfield Realty who is representing the property. 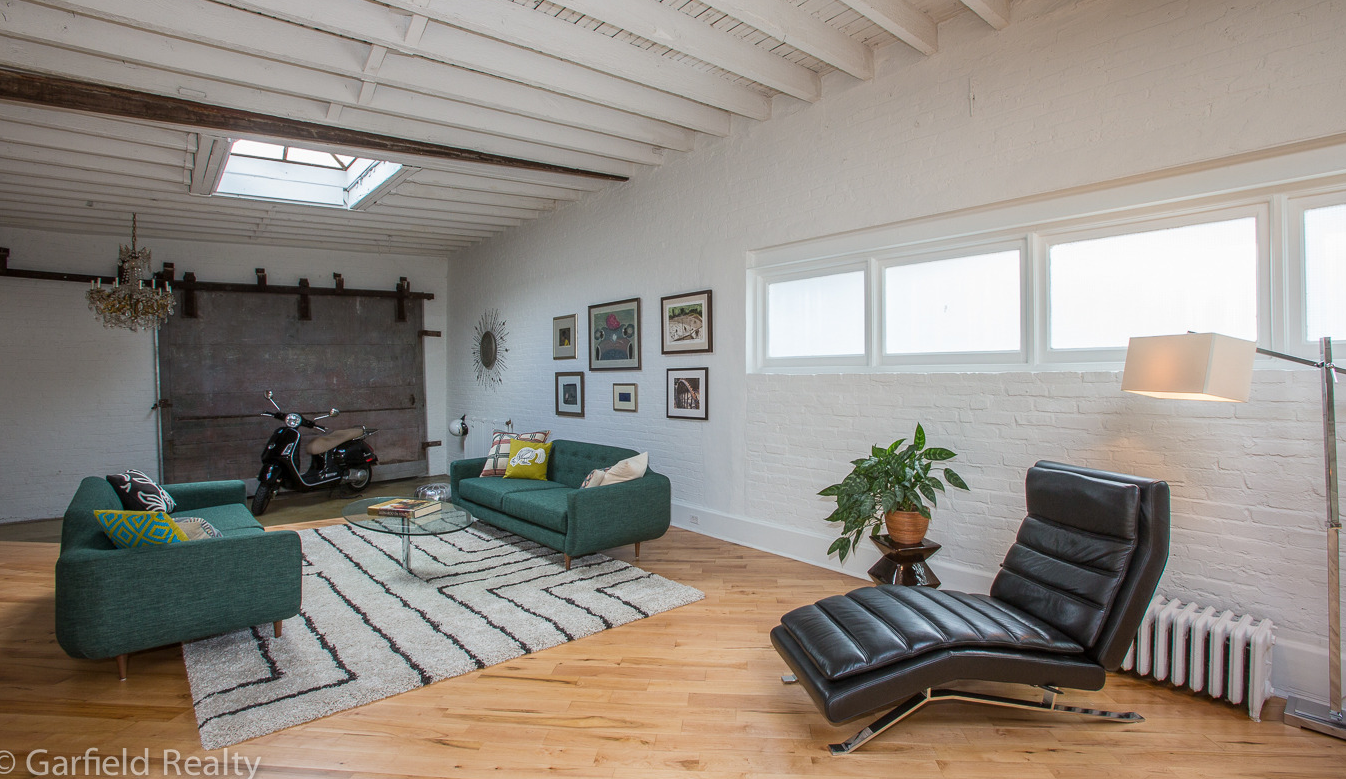 The fire door as seen from the interior of the living space.

In 2001, the property was bought and converted into a two-bedroom residence outfitted with skylights, a wall of pane-windows and a high-end, rustic kitchen complete with a vintage stove and farmhouse-style sink. Although the owner poured significant time, moneyand effort into redesigning and stylizing the home, during the entirety of the time he lived there, he did so without an official certificate of occupancy from the Department of Buildings. It wasn’t until 2007 when he sold the property that the building received its CO and was converted into a true two-bedroom residence. 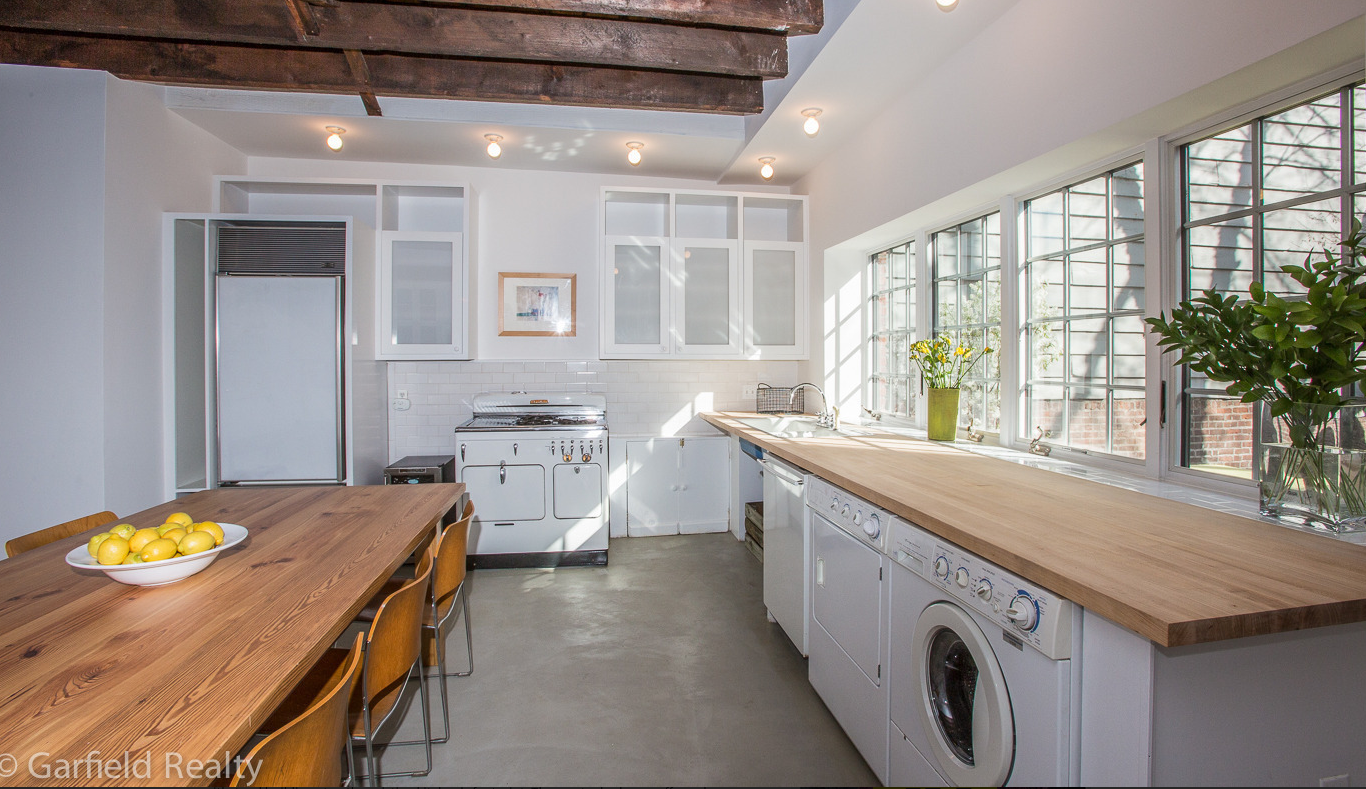 The place features an expansive kitchen with vintage stove.

The home has not been altered much by the current owners with the exception of the addition of a Stûv fireplace. At the time it was installed, the fireplace was one of only two like it in the country. This one had to be delivered from Montreal. The current owners have been renting the home out for the past two years, but just last week decided to put it on the market. 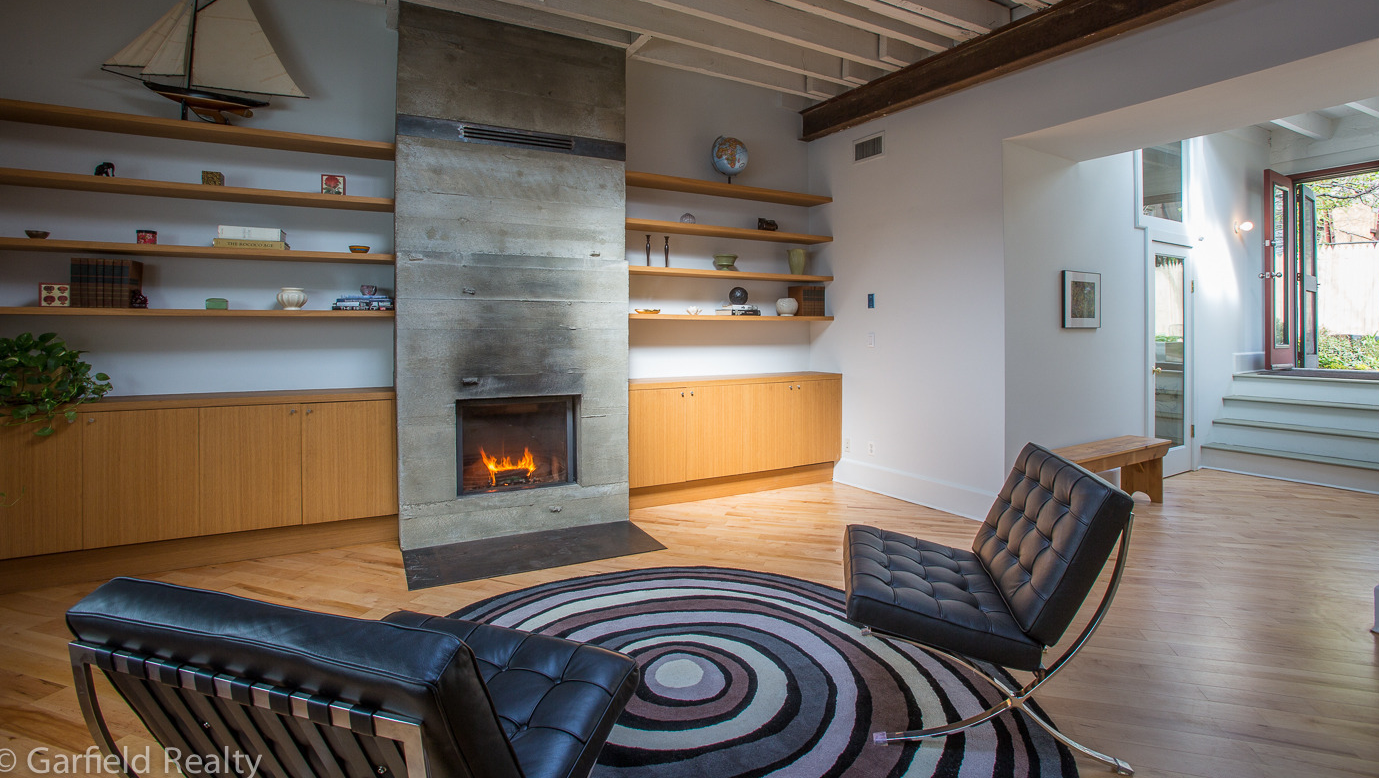 A Stûv fireplace was added to the living room in 2007

At the $2.25M price point, the place has been drawing buyers in the Brooklyn brownstone market as well as Manhattanites looking for more space in Brooklyn, according to Paglia. The interiors and exteriors don’t leave much to complain about. The current owner is a landscape architect and did a lovely job designing the courtyard and rear garden. 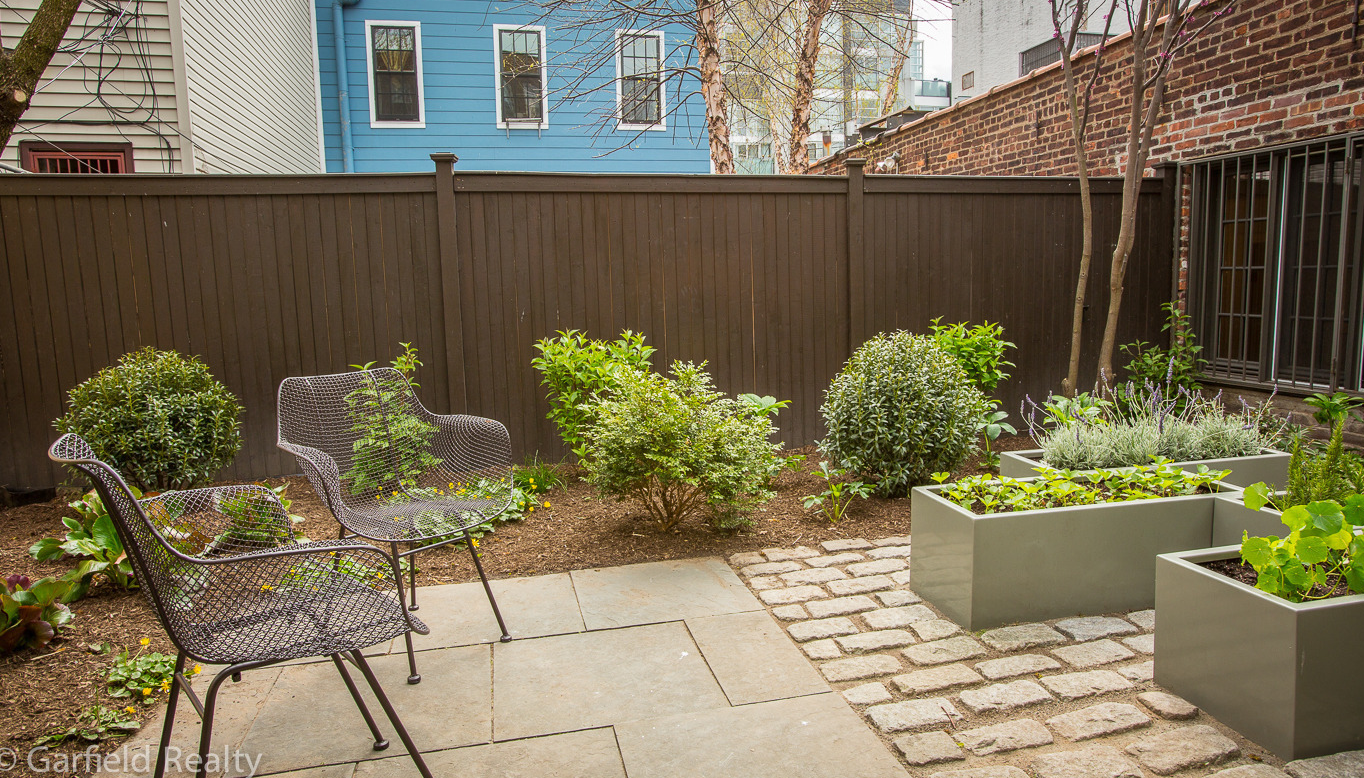 But given its two-bedroom layout and location in a growing destination for the stroller-bound set, the place arguably might cause concern for potential buyers looking for a long-term home for a growing brood. One major perk of the property, however, is that it’s got the air rights and FAR (floor to area ratio) to accommodate a vertical extension. That means that buyers have the opportunity to add a second level to the property above the kitchen. Despite the scale, scope and cost – not to mention headache – these sorts of major structural additions entail, many buyers have already come through the property with architects in tow, say Paglia. Chances are whoever buys this spot has dreams of building big – and the financial resources to fund them.