A Tale of Two Developers: How Luxury Rents Are Rising in NYC and Elsewhere 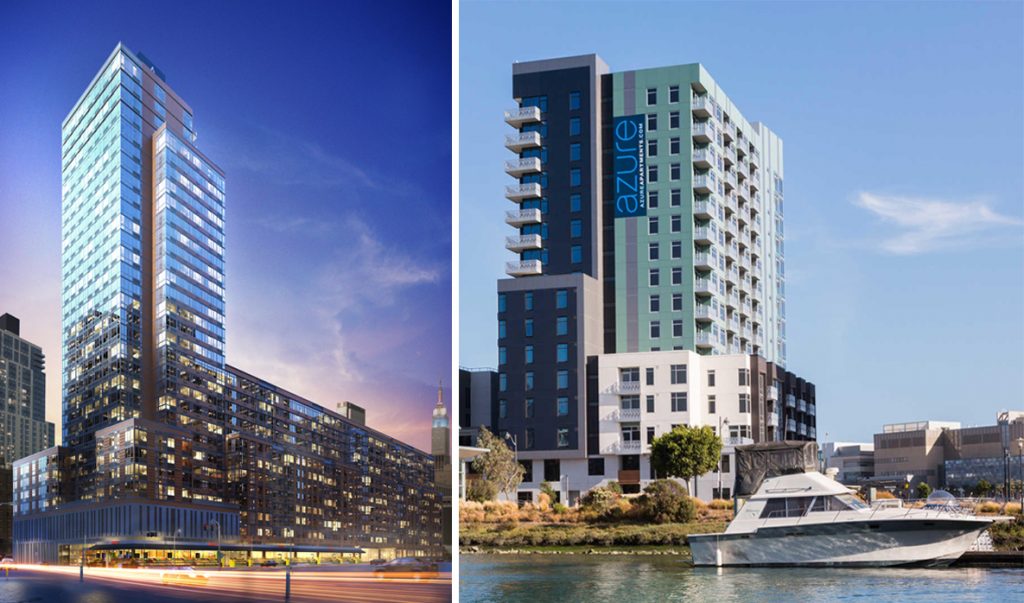 The AVA High Line in Chelsea, left, and the Azure in San Francisco: Two buildings owned by the same company where rents are quickly converging.

As a part of our recent NYC rent affordability report, we found that prices on high-end rental units in the city have not only increased at slower rates than more modestly priced rentals, but also at a slower pace than in other major cities across the U.S. Our analysis revealed that rents for some of the most prominent rental buildings in San Francisco and Seattle have risen significantly faster than units in comparable buildings in New York. To compare high-end rent increases across cities, we analyzed public financial statements from two of the nation’s largest owners and operators of rental apartments, Avalon Bay Communities and Equity Residential.

The two developers combined own more than 100,000 apartments in the eight urban markets we looked at, including more than 13,000 in New York. While our analysis doesn’t control for amenities, features, and locations across cities, when we dug into the details, we found buildings owned by the two companies to be comparable across cities. New York City properties owned by Equity Residential include Mantena in Hudson Yards and 170 Amsterdam on the Upper West Side; Avalon Bay properties include the Avalon Bowery, AVA High Line, and Avalon Midtown West. In each of these cases, one-bedroom apartments ask more than $3,500 per month, with several one-bedroom apartments listing for more than $4,000 per month. These buildings are also of a similar caliber to properties both companies manage across the country, offering renters luxury amenities and prime locations. Comparable examples include the Avalon Rose in Los Angeles, the Azure in San Francisco, 425 Mass in Washington, D.C., and the AVA Belltown in Seattle.

New Yorkers Pay the Most, But the West Coast Is Catching Up

New York had the highest average rental rates of any market where Avalon Bay and Equity Residential operate. New York rents collected by both developers averaged more than $3,750 in Q2 2017, while rents in San Francisco – the second-most expensive locale for both companies – averaged roughly $3,125. Rents in Boston averaged $2,644, while rents in Seattle, Los Angeles, and Washington D.C. all followed at less than $2,500.

However, New York’s lead as the most expensive market in the country for both developers has diminished steadily in the wake of the great recession. Rents in New York luxury buildings owned and operated by the two developers increased by roughly 3.6 percent per year from Q4 2009 to Q2 2017. As measured by the developer’s financial disclosures, New York rents grew 3.6 percent slower than those in San Francisco and 2 percent slower than those in Seattle. Los Angeles rents rose at a modestly higher rate, and Boston rents rose at roughly the same rate as those in New York. High-end rent growth only lagged New York in one city: Washington, D.C., where rents grew at just 2.3 percent per year.

The View From the Top of Each Market

Who can afford to live in a one-bedroom at these luxury rates? Some of the most sought-after professionals in the country, according to an assortment of salary data. While the data we examined in our affordability report showed that the average earner in New York City made a median salary of just $49,810 in Q1 2017[i], software developers made a median salary of roughly $120,000, putting a $3,000-per-month apartment in the affordable range for a single individual (under the common notion of allotting no more than 30 percent of monthly income to rent). According to data from Glassdoor[ii], New York-based senior software engineers at Google make $175,000 per year, while New York-based senior software engineers at Goldman Sachs make $163,000. On these salaries, $4,000-per-month apartments become affordable.

Housing for the Wealthiest Affects Many Others

Though this group of professionals tends to have little trouble making rent each month, this trend has huge implications for the broader housing market. Highly paid tech workers have earned the ire of long-term residents of tech hubs for displacing those earning less in neighborhoods like the Mission in San Francisco and Capitol Hill in Seattle. Nonetheless, high-earning, in-demand professionals spend money in local businesses, creating service jobs for lower-skilled workers and adding to the tax base that funds services for the city’s most vulnerable populations.

As shown by the frantic competition among cities (including New York) to host Amazon’s next headquarters, city officials will go to great lengths to attract highly paid workers. A key aspect of that effort is building housing to attract these skilled employees and controlling the ongoing cost of that housing. In this respect, New York has fared better than many of the cities with which it competes for jobs. In discussions of their recent performance, both developers we analyzed cited “supply issues” – an onslaught of competition from an abundance of other buildings – as a challenge unique to the New York market. The recent rental building boom in areas such as Downtown Brooklyn and Long Island City has contributed to lower rents for some New Yorkers – a trend that has not prevailed in other cities, where developers have struggled to build housing. Nevertheless, both firms continue to invest in New York.

Both Avalon Bay Communities and Equity Residential publicly report same store results by market here and here, respectively, which measure the growth in rental rates between two years for the same set of units in the same market. To calculate average rents, we examined the Q1 2017 same store results. To calculate rental growth, we calculated the cumulative growth in same store rents for the past seven and a half years. In both instances, we report the weighted average between the two companies based upon the number of units underlying the results in each market in 2017. Though we report average metrics, both companies performed roughly similarly in each market. We aggregated market statistics from reports based on the narrowest geographic definition for each of the cities we examined, though the actual geographic bounds for each market reported by each firm may have changed over time and may not perfectly align with each city’s political boundaries.