In the annals of New York real estate, with its propensity to serve up listings of some of the world’s most expensive apartments chock-full of the best finishes and high-end appliances, Unit 14 at 27 Orchard Street really is a mind-blower.

Actually, Unit 14 is actually a metaphor — a Chinatown apartment so small and so jerry-rigged that the only place for a shower stall is in the “kitchen.”

At least, that’s the way The New Yorker sees it. 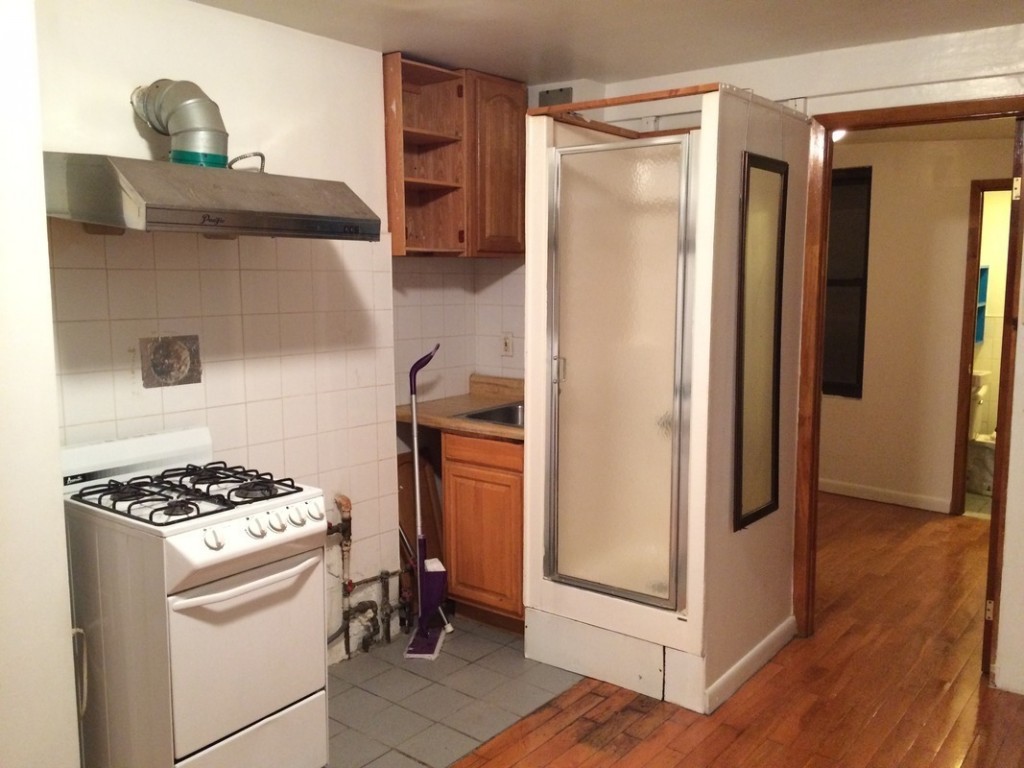 Only in Chinatown: Shower in the kitchen

In the May 11th issue of the venerable magazine that has given us exposés on everything from the Dalai Lama to ISIS to Chris Christie’s “Bridgegate” and delivered cartoons and poetry that have stirred our souls, senses and funny bones, The New Yorker has a piece that spot-on captures the tightness of the NYC real estate market. And it all comes down to the shower in the kitchen in Unit 14 at 27 Orchard Street.

LISTING NOTES:  This old world style apt is better than your average studio! Although the shower is in the kitchen, YES it’s in the kitchen, it has a separate room for your bed- so the kitchen/living area can easily accommodate a sofa and small table & chairs & more!

The rent may be negotiable, so make an offer and ill talk to the building owner :)

The New Yorker wasn’t the first media outlet to seize upon Unit 14. Curbed called it the “saddest apartment in all of New York City,’’ which may or may not be hyperbole. But the point was well taken. Unit 14 cried out for exposure as the antithesis of everything you generally see being listed and hyped in NYC real estate these days.

Unit 14 ain’t no party, it ain’t no disco, it ain’t no fooling around. It’s the kind of “apartment,” in fact, that old-school New York artists like David Byrne and the Talking Heads could have written a song about. It IS the stuff of cartoons, of lampoons, of literary inspiration. Who, after all, would rent an apartment for $1,795?

Well, maybe no one. Currently, the apartment is off the market. But maybe the listing agent, whose name is Lorence, was smarter than all of us. Maybe Unit 14 wasn’t the issue. Maybe Lorence had an inkling that the shower-in-the-kitchen metaphor/story would really be the best way to generate interest in the other seven other apartments he had to rent.

AND THE SHOWERS ARE ALL IN THE BATHROOM!

When we contacted Lorence to see if interest in 27 Orchard had spiked after The New Yorker piece, he texted back “haha.”

Either way, this truly was a great moment in New York real estate and literary history. The New Yorker had memorialized and immortalized Unit 14 at 27 Orchard Street. What a town.